Giants 1B Brandon Belt works back from COVID-19, then mono 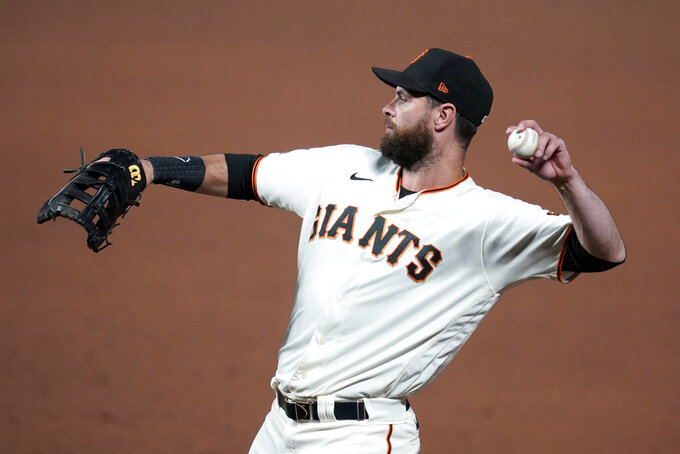 FILE- In this Sept. 22, 2020, file photo, San Francisco Giants' Brandon Belt throws the ball during a baseball game against the Colorado Rockies in San Francisco. Belt got hit with quite a double-whammy that derailed his offseason: First, in January, he contracted the coronavirus only to immediately become ill again with mononucleosis. Gradually regaining his strength and stamina at last, the first baseman acknowledges he isn't sure he will be ready for opening day with the San Francisco Giants. (AP Photo/Jeff Chiu, File)

SAN FRANCISCO (AP) — Brandon Belt got hit with quite a double-whammy that derailed his offseason.

First, in January, he contracted the coronavirus. Then, he immediately became ill again with mononucleosis.

Gradually regaining his strength and stamina at last, the San Francisco Giants first baseman acknowledges he isn't sure he will be ready for opening day. That had been the hope after he worked back from surgery on his right heel in October to remove a bone spur.

The mono zapped him so much the 32-year-old Belt was forced him to stay in bed for a week.

“All of this going on here in the past couple months, I was pretty concerned with how the heel was going to rehab as well, but honestly it's been going great,” Belt said Saturday before the Giants played Cleveland in Scottsdale, Arizona.

“It's still been loosening up. It feels great, it feels so much better compared to last year. Now it's just a matter of getting the strength back in my foot and just doing day-to-day activities so that I can build the strength and stamina up in my foot to be able to go a whole game. I don't think I'm too far away."

Belt said he didn't deal with any symptoms initially from the bout with COVID-19. After ending his quarantine period, he began to regain his training routine only to deal with feeling “really winded, really light-headed, really dizzy and lost all energy after about 10 minutes of working out."

“I had to deal with that for about three or four weeks and right at the end of that three to four weeks is when I got mono,” Belt said. “All that kind of came together and I got hit pretty hard.”

Belt has begun hitting batting practice and would like to build on a solid year during the shortened 60-game 2020 season, when he batted .309 with nine home runs and 30 RBIs playing 51 games. The timing on his swing is getting better each day but still a little off as is typical at the start of spring training — and his body is still sore.

Of course he hopes to play in games soon — but also realistic it might take a while to find his healthiest form again.

“I'm still kind of in the same situation. I don't know if I'll make it to opening day but I'm going to try my hardest to get there,” he said, “and if I'm a couple weeks late then that's just what it has to be.”