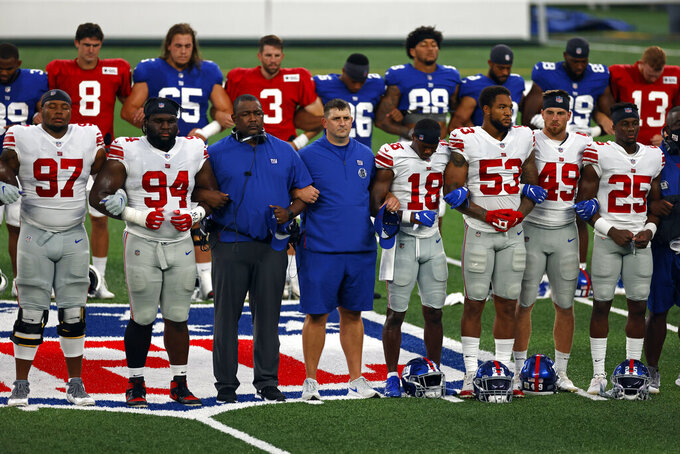 FILE - New York Giants head coach Joe Judge, center, stands with arms linked with his players to make a social injustice statement prior to their scrimmage at the NFL football team's training camp in East Rutherford, N.J., Friday, Aug. 28, 2020. A long-time advocate of the right to protest for social change and equality, New York Giants co-owner John Mara admits he was stunned listening to his players talk about their experiences with police and authorities in the wake of the death George Floyd in June. (AP Photo/Adam Hunger, File)

EAST RUTHERFORD, N.J. (AP) — A long-time advocate of the right to protest for social change and equality, New York Giants co-owner John Mara was stunned recently listening to his players talk about their experiences with law enforcement officials in the wake of the shooting death George Floyd in June.

Speaking to the media Thursday with the start of this coronavirus-challenged season less than two weeks away, Mara discussed a range of issues, from his struggling team and its personnel to his new coach and embattled general manager.

His comments about social justice were clear and strong in a league where many fans and some owners are conservative.

Mara reiterated his 2017 preference that the Giants stand for the national anthem. He also repeated that he will support any players who choose to kneel and use either their actions or voice to support social change.

“I will tell you this, one of the most memorable team meetings I have ever been involved with took place I guess right after the George Floyd murder when we had a Zoom call with players,” Mara said. “I listened to the players' own experiences growing up, dealing with law enforcement. To see the raw emotion that came out of them, guys got very emotional. It’s something, it was an eye opener for me.

Mara would like his players to meet with local governors, politicians and police chiefs to discuss and find solutions to bring about change. He added many of the players have worked in their communities in recent months to achieve that, and it has made it easier for him to support them.

Mara does not think fans will be able to attend games at MetLife Stadium this season because of New Jersey restrictions regarding coronavirus. He acknowledged some NFL teams will have a competitive advantage because their home states will allow fans to attend games, adding that's something teams will have to accept in this strange season.

“If we get to a point where the state believes that we can do this safely, then we’ll consider letting fans in the building,” he said. “But I’m not sure that we’re at that point right now.”

The 65-year-old Mara said he had doubts this spring there would be a season because of the outbreak of the virus. He is now optimistic it will be played because the NFL protocols dealing with the virus have been effective. Hiccups might happen, he added.

He also shot down any thought the Mara family was planning to sell the interest it has had in the team since 1925.

“We’re in this for the long haul,” said Mara, who co-owns the team with the Tisch family.

Mara has been impressed Judge, who was hired in January to replace Pat Shurmur after two seasons. He said the former Patriots special teams coordinator is a hard worker who sees the big picture, and someone who has gotten his players to buy into his system.

Mara refused to put a win total on what would be considered a successful season, but he and co-owner Steve Tisch want the same thing for a franchise that has made the playoffs once since winning the Super Bowl in February 2012.

“I want to feel like when we walk off the field after the last game that we play, whenever that is, that we’re moving in the right direction,” Mara said. “That we have the pieces in place to compete for a Super Bowl.”

Mara refused to be pinned down about Gettleman's future. The team won nine games in his first two years in change.

Mara indicated the team planned to make a decision soon on the status of Baker, who was arrested in the offseason on armed robbery charges. A first-round pick last year, Baker is on the commissioner's exempt list and does not count on the roster.

Mara said nothing in Baker's background check indicated he would have this type of problem.

Gettleman drew some criticism in 2019 for drafting quarterback Daniel Jones with the sixth pick overall. However, the Duke product had a good rookie season despite 23 turnovers.

“He showed a lot of grit and a lot of promise and made a lot of big plays," Mara said of Jones. “I think with the right supporting cast around him, I think the sky is the limit for him.”

Mara has been attending Giants training camps for six decades. He said this has been the most difficult because of the virus, social unrest and having a new coaching staff take over in a period where virtual teaching was mandatory.

The Giants (4-12) kick off the season on Sept. 14 at home against Pittsburgh.