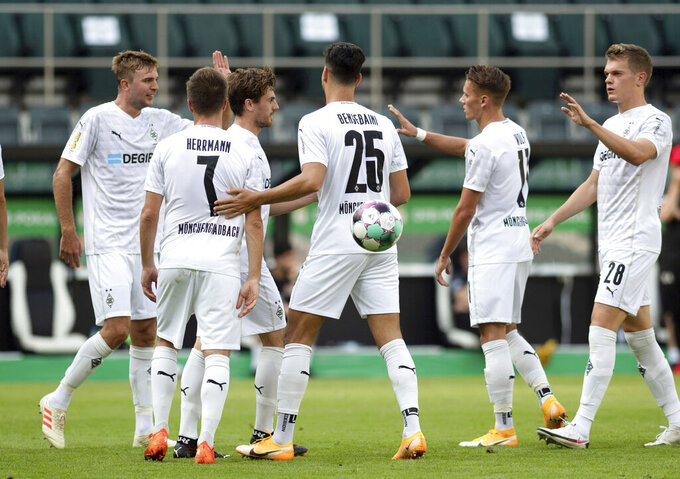 BERLIN (AP) — Borussia Mönchengladbach, Augsburg and Cologne enjoyed huge wins over lower-league opposition to book their places in the second round of the German Cup on Saturday.

Gladbach warmed up for its Bundesliga opener against Borussia Dortmund next weekend by routing fourth-tier Oberneuland 8-0, Augsburg thrashed fifth-tier Eintracht Celle 7-0, and Cologne enjoyed a 6-0 win over fourth-tier Berlin-based Altglienicke.

All three underdogs gave up their cherished home advantage for the games after finding they could not meet the stringent conditions set by the German soccer authorities to minimize the risk of coronavirus infections.

Up to 300 supporters were allowed at each game in Mönchengladbach and Cologne, while there were none in Augsburg’s empty stadium.

Union Fürstenwalde, from the north-east regional league, also gave up its home rights and was beaten in Wolfsburg’s empty reserve stadium 4-1.

American forward Josh Sargent scored early in the second half to set Werder Bremen on its way to a 2-0 win at fouth-tier side Carl Zeiss Jena.

There were wins, too, for Bochum and Osnabrück at Engers and Todesfelde, respectively.

Schalke’s game against Bavarian side Schweinfurt on Sunday was called off on Friday after Türkgücü Munich lodged a complaint. Türkgücü contends it should be playing Schalke as it was the local regional league leader ahead of Schweinfurt when the division resumed after its pandemic-induced break. Bavarian soccer authorities had already declared Türkgücü promoted to the third division for the new season, making second-placed Schweinfurt the best Bavarian amateur side at the time of registration for the cup.

Defending champion Bayern Munich’s game was put back to October to give the side more time to recover after winning the Champions League on Aug. 23.