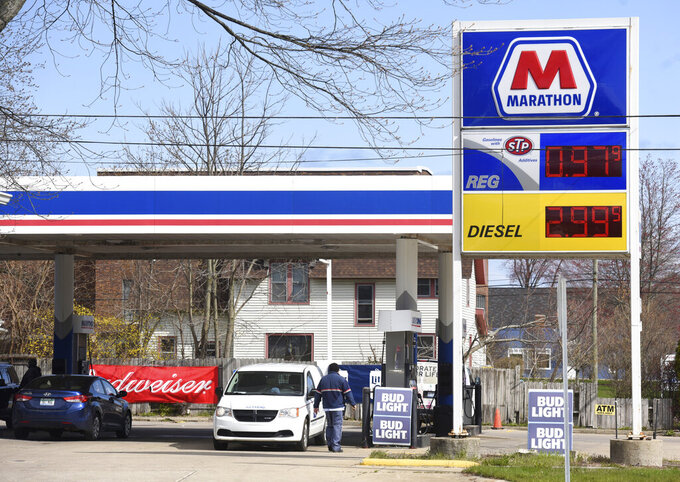 FILE - In this April 21, 2020 file photo, customers fill up their tanks at the Marathon gas station along Broadway Street in South Haven, Mich., as the price for regular unleaded falls below $1 a gallon. The outbreak of the coronavirus has dealt a shock to the global economy with unprecedented speed. Fill-ups at the pump fell 49% from 2019 volumes during the second week of April. (Don Campbell/The Herald-Palladium via AP, File)

— U.S. gasoline consumption is more than halfway back to pre-COVID-19 levels, according to the Oil Price Information Service, an IHS Markit company.

Gasoline sales have been climbing at an average of 6.4% per week since April, according to OPIS President Fred Rozell.

— The pilots’ union at American Airlines is proposing that the government help airlines by buying enough seats so that passengers never have to sit next to a stranger.

The Allied Pilots Association said Wednesday that would make people feel comfortable about flying during the pandemic, lead airlines to add flights, and help avoid “significant” layoffs when $25 billion in federal payroll aid to airlines runs out in October. The proposal isn’t cheap. The union estimates it would cost up to $1.9 billion a month if airlines operate at 40% of their 2019 capacity and up to $3.8 billion a month if they run at 80%.

— Southwest Airlines is testing whether a fare sale will persuade people to start traveling again. Southwest launched a three-day sale this week with some shorter round trips under $100 and longer routes for up to $238 in late summer and fall.

Air travel in the U.S. has been slowly picking up since mid-April. The Transportation Security Administration screened at least 500,000 people for five straight days — the first time that’s happened since mid-March — but on Monday, the number fell back to 471,421, down 81% from the comparable day last year. The governors of New York, New Jersey and Connecticut added a new hurdle for domestic travel by ordering that people coming from states with high COVID-19 infection rates – including Texas, Florida and Arizona – must quarantine themselves for 14 days upon arrival.

— U.S. hotel occupancy continues to improve, with some leisure destinations nearly back to the levels they saw prior to the coronavirus pandemic. Occupancy stood at 44% the week ending June 20, according to STR, a hospitality data and consulting firm. That was down 41% from a year ago, but it was still the 10th consecutive week of improvement for the industry. In Panama City, Florida, hotels were 89% occupied, just shy of occupancy levels during the same week in 2019. Oahu, Hawaii, continued to have the lowest occupancy levels, of just under 14%.

— Airport ground-services firm Swissport says it may have to cut half its British staff because of the collapse in airline travel caused by the coronavirus pandemic.

The company, which operates baggage handling and check-in services at U.K. airports including Heathrow and Gatwick, said Wednesday that 4,556 jobs may be cut as it faces a loss of 50% of its revenue this year.

— Apple has decided to re-close seven of its recently reopened stores in the Houston area because of COVID-19 problems in Texas. The resurgence of the disease prompted Apple to backtrack and close the Houston area stores on Wednesday afternoon. The move comes just days after Apple re-closed 11 other stores in Arizona, Florida, North Carolina and South Carolina because of escalating cases in those states.

— Health and wellness company GNC Holdings has filed for Chapter 11 bankruptcy protection. It is looking to close at least 800 to 1,200 stores.

The company said in a statement that it's looking to restructure its balance sheet at the same time it explores finding a potential buyer, with a minimum purchase price of at least $760 million.

GNC and all of its subsidiaries remain open for business.

The company expects to confirm a standalone plan of reorganization or consummate a sale that will allow the business to exit from the bankruptcy process in the fall.

— Furniture company La-Z-Boy has decided to permanently close its Newton, Mississippi manufacturing plant and reduce its global workforce by approximately 10%. The company had previously temporarily close the majority of its manufacturing operations and temporarily furloughed 70% of its employees as it dealt with plant and store closures tied to the pandemic. La-Z-Boy said in a regulatory filing that it has called back about 6,000 workers.

Consolidated sales dropped 19.1% in its fiscal fourth quarter because of the impact of the virus outbreak on the last two months of the period. Same-store sales for the La-Z-Boy Furniture Galleries network fell 35% due to the pandemic and related store closures.

BRAND LOYALTY: Shoppers loyal to the Ugg brand are helping Deckers Outdoor remain resilient during the pandemic, according to Jefferies analyst Janine Stichter.

Even though Ugg retail stores closed due to the outbreak and there's been closures across most of its wholesale accounts, Stichter says the brand's customers have actively sought out Ugg products on both its namesake website and through wholesale accounts.

“While Ugg is typically viewed as a fall/winter brand, Ugg’s strong sell-through during COVID helped further legitimize its standing as a year-round brand," she wrote.