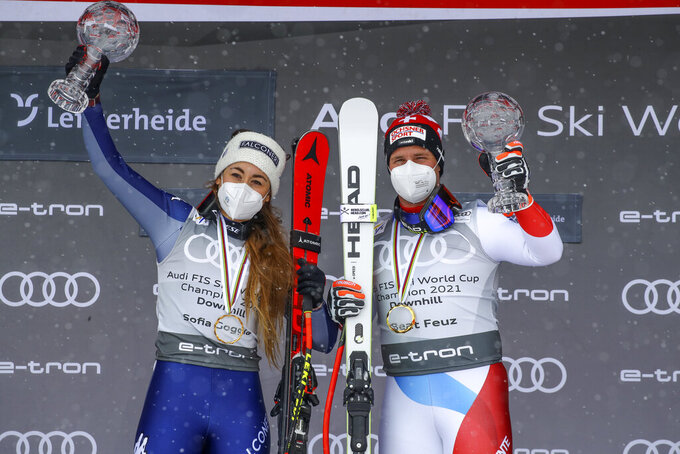 Sofia Goggia and Beat Feuz clinched the downhill World Cup season titles on Wednesday without needing to put on their skis after the final races in the discipline were canceled because of heavy snow.

Goggia, who has not raced since breaking a bone in her right knee seven weeks ago, won the downhill crystal globe for a second time. It was the fourth straight title for Feuz.

The races in Lenzerheide, Switzerland, were canceled because of “continuing snowfall and the present weather situation,” organizers said.

The decision was bad news for Swiss skiers Lara Gut-Behrami and Marco Odermatt, who were hoping to make up ground in the race for the women's and men's overall World cup title.

Petra Vlhova and Alexis Pinturault each holds a narrow lead in the overall standings but Gut-Behrami and Marco Odermatt — their nearest challengers — are stronger in downhill.

Organizers had aimed for an ambitious program Wednesday with training runs in the morning and races starting after midday.

The mandatory practice runs required under World Cup safety rules had not been possible Tuesday because of snow and strong winds on the Silvano Beltrametti slope.

Men's race director Markus Waldner said the program was “only doable with really nice weather. We knew that yesterday but anyway we tried.”

The World Cup finals week has no reserve days and International Ski Federation rules do not allow races to be rescheduled. Racing is now set to begin Thursday with the men’s and women’s super-G.

Waldner said he was confident Thursday's races can go ahead, though clearing the race surface of fresh snow was "a lot of work on the race track.”

After the cancellations, the International Ski Federation said Waldner's assistant, Emmanuel Couder, tested positive for COVID-19 and that race staff in Lenzerheide will be given daily tests. No tickets were sold to fans for the finals week to comply with Swiss rules amid the pandemic.

Goggia was spared of having to race for the first time since her injury on Jan. 31 to protect her downhill standings lead. She had been leading defending champion Corinne Suter by 70 points. The winner of each race is awarded 100 points.

The 2018 Olympic champion from Italy won four straight downhills — a World Cup feat matched only by American great Lindsey Vonn in the last 25 years — then crashed when skiing into the valley after a race was canceled in Garmisch-Partenkirchen, Germany.

Goggia also won the crystal globe in downhill in 2018, which she noted was when Vonn was still competing in her last full season on the World Cup circuit.

“I was really consistent (this season) and I’m happy I got another one,” said Goggia, who will not race again this season.

“I’m very proud of the last four years," the 34-year-old Feuz said in translated comments. "I’m able to be fast on any kind of course."

Franz Klammer of Austria topped the downhill standings a record five times — four straight in the mid-1970s and a fifth in 1983.

Feuz won two downhills this season, both on the toughest course in Kitzbühel, Austria, in January.

The 23-year-old Odermatt trails Pinturault by 31 points in the overall standings and was favored to close the gap on Wednesday. Pinturault was set to start his first downhill of the season.

Both are threats in super-G with Odermatt still in contention for the discipline title. World champion Vincent Kriechmayr of Austria leads Odermatt by 83 points and needs only a 14th-place finish to secure the crystal trophy.

The Frenchman, who turns 30 on Saturday, is seeking a first overall title after finishing runner-up in each of the past two seasons. He also finished third three times.

Vlhova would also be a first-time champion. The Slovakian slalom specialist has a 96-point lead over Gut-Behrami, the 2016 overall champion who has already secured the super-G season title.