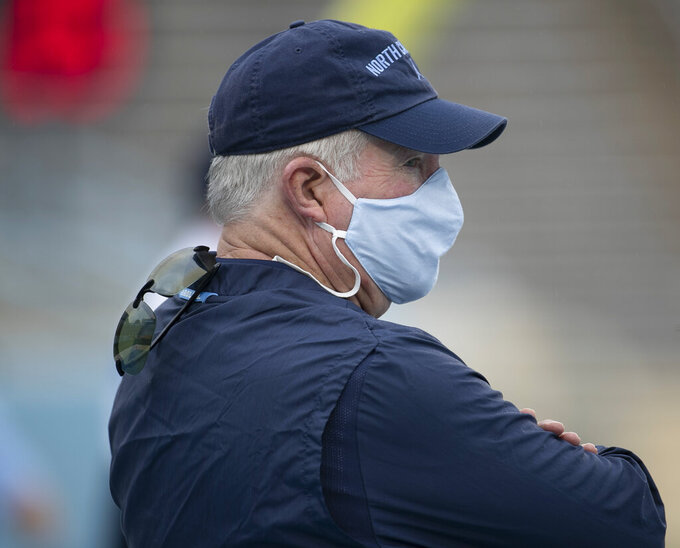 The Pac-12 university presidents and chancellors will meet Friday and be presented options for staging a fall football season, but Commissioner Larry Scott says a vote by the CEO Group is not expected.

“(Friday) is a chance to get everyone caught up on what’s been a very dynamic and rapidly changing series of events over the last 24 to 48 hours,” Scott told The Associated Press on Thursday. “We’ll obviously have to decide soon, but I’m not necessarily expecting a decision (Friday).”

A day after the Big Ten changed course from its decision to postpone fall sports becaise of the pandemic and set a late October start for football, the Pac-12 appeared headed toward a similar move.

The Mountain West is trying to do the same and there even is some movement in the Mid-American Conference toward reconsidering a fall season.

“The board has asked for a plan,” Mountain West Commissioner Craig Thompson said. That conference’s university presidents next meeting is next week.

Meanwhile, early Thursday, it was announced that another FBS game could not be played because of COVID-19 issues with one of the teams. Charlotte at No. 12 North Carolina scheduled for Saturday had to be canceled because the 49ers did not have enough available offensive linemen.

The Pac-12′s medical concerns about playing through the pandemic have been eased by the conference earlier this month securing rapid, daily COVID-19 testing for all its schools. This week brought more good news. State and local authorities in California and Oregon signaled they would be willing to ease COVID-19-related restrictions that have made it nearly impossible for six Pac-12 teams to prepare for a football season.

There is still work to be done with health officials, but things are moving quickly enough that the Pac-12 is hopeful it could start a season that allows its teams to compete for a spot in the College Football Playoff. The four playoff teams are scheduled to be selected Dec. 20.

“We feel we've got a responsibility to our student-athletes and our programs to explore that possibility. So that's what we're doing,” Scott said.

The Big Ten’s plan is to start an eight-games-in-eight-weeks regular season the weekend of Oct. 24, with a championship game on Dec. 19.

The San Jose Mercury News reported, citing unidentified sources, that the Pac-12’s athletic directors were targeting Oct. 31 to start football season. Scott declined to confirm the report or go into any details about potential models for a season.

The Pac-12 presidents' meeting was originally scheduled to address basketball. The NCAA set a Nov. 25 opening date for the season. Scott said for the same reasons there is hope for a fall football season there is optimism the Pac-12 will start basketball season at the same time as the rest of the country.

Thompson, whose league includes three California schools, said he has been in frequent contact with Scott.

The lifting of restrictions in California has been hurdle for the Mountain West to clear, too, but the conference is still trying to catch-up in another pivotal area.

“The real trigger on this is the rapid-result testing,” Thompson told AP. “And that’s the key, if we can get that. We’re talking to a number of manufacturers and providers. That has to be done really before any decisions can concretely be made.”

Thompson said the goal in the Mountain West is also to have a season in place that could wrap up on Dec. 19 and allow its teams to be selected for the playoff and lucrative New Year’s Six bowls.

“You come up with a model and then you move it backwards and forwards depending on where you stand with some of the other issues, particularly testing,” Thompson said.

Another immediate concern for both the Pac-12 and Mountain West is wildfires raging in California and Oregon that have led to unsafe air quality in some areas. The Seattle Mariners had a series this weekend with the San Diego Padres moved to Southern California.

The Mid-American Conference, which was the first FBS league to postpone its fall sports season, indicated earlier in the week it was still focused on a winter/spring season. But some MAC players have followed the lead of their peers in Power Five conferences by pushing for a fall season on social media.

Kent State coach Sean Lewis also called for the conference to revisit the decision to punt on a fall season.

Charlotte-North Carolina became the 14th FBS game postponed or canceled because of COVID-19 since Aug. 26. It would have been the first meeting between the schools.

In its release, Charlotte said there had been three positive cases among football players discovered through regular league-required testing during the past two weeks. Those individuals had been placed in isolation with medical care, while others impacted through contact tracing were told to quarantine for 14 days.

Charlotte didn’t specify exactly how many players were affected and said its home opener with Georgia State on Sept. 26 is still on.

The disruptions are not a deterrent to the other conferences and the Pac-12 in particular does not look as if it is headed toward days of will-they-or-won't-they speculation that gripped the Big Ten.

Scott would not make predictions about what his bosses will do but the Pac-12 is not operating in secrecy.

“We've tried to be very deliberate and very transparent,” Scott said. "The major concerns and obstacles have now been cleared.