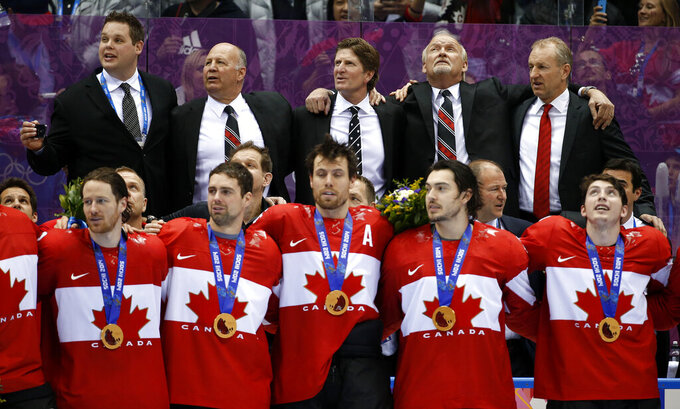 FILE - Canada players and coaches sing the national anthem after being awarded their gold medals after they beat Sweden 3-0 in the men's ice hockey gold medal game at the 2014 Winter Olympics, Sunday, Feb. 23, 2014, in Sochi, Russia. Four years after walking away with a bronze medal after the NHL did not participate, Canada's team in Beijing has remnants of the ones that won gold in 2010 and 2014 and a roster that looks capable of doing it again. (AP Photo/Mark Humphrey, File)

Canada's hockey swagger is back at the Olympics.

Four years after walking away with bronze after the NHL did not participate in the Games, Canada's team in Beijing has remnants of the ones that won gold in 2010 and 2014 and a roster that looks capable of doing it again. Top player Eric Staal was in Vancouver, coach Claude Julien was on the staff in Sochi and the standard is again gold or bust.

“You can never underestimate experience: the experience of having lived through it,” Julien said. “That’s invaluable.”

Julien was an assistant to coach Mike Babcock eight years ago in Sochi when Canada dominated the tournament on the way to beating Sweden in the final. Staal was not only part of the team that won in Vancouver on Sidney Crosby's golden goal but is one of just 29 players in hockey history to win Olympic and world championship gold along with the Stanley Cup.

“Any team I’ve had success on has had a great balance of both youth and experience,” Staal said. “I think the way our roster’s set up, I think we have that. It’s fun to be around those young guys. For me, as an older player, an experienced guy, it brings out more energy, more excitement.”

And likely more offense, which was one of the concerns in Pyeongchang four years ago when Canada went with an older lineup. Hockey Canada is putting more trust in young players like Power, McTavish and 22-year-old prospect Jack McBain in the name of scoring goals consistently.

Canada's road map to gold in Sochi was not about scoring goals as much as keeping the puck out of its own net. This team does not have Carey Price in goal or Drew Doughty on defense but hopes to foster that same identity.

“We take pride in playing well defensively and being hard to play against,” defenseman Mark Barberio said. I think the biggest thing is just to not overcomplicate our lives: play a simple game, try and get pucks moving north, break up plays defensively. I think that’s just the staple of Canadian hockey: just being hard to play against, and we’re just going to continue that tradition as we get into Beijing.”

That Canadian tradition is not about sitting back and defending. Instead, it's predicated on possessing the puck as much as possible and wearing down opponents by going on the attack.

That may have gotten lost in 2018 in the first Winter Olympics without NHL players since 1994. But Hockey Canada is confident it has a winning plan now, and it comes with a similar strategy from Sochi that Julien and Co. hope brings the same result.