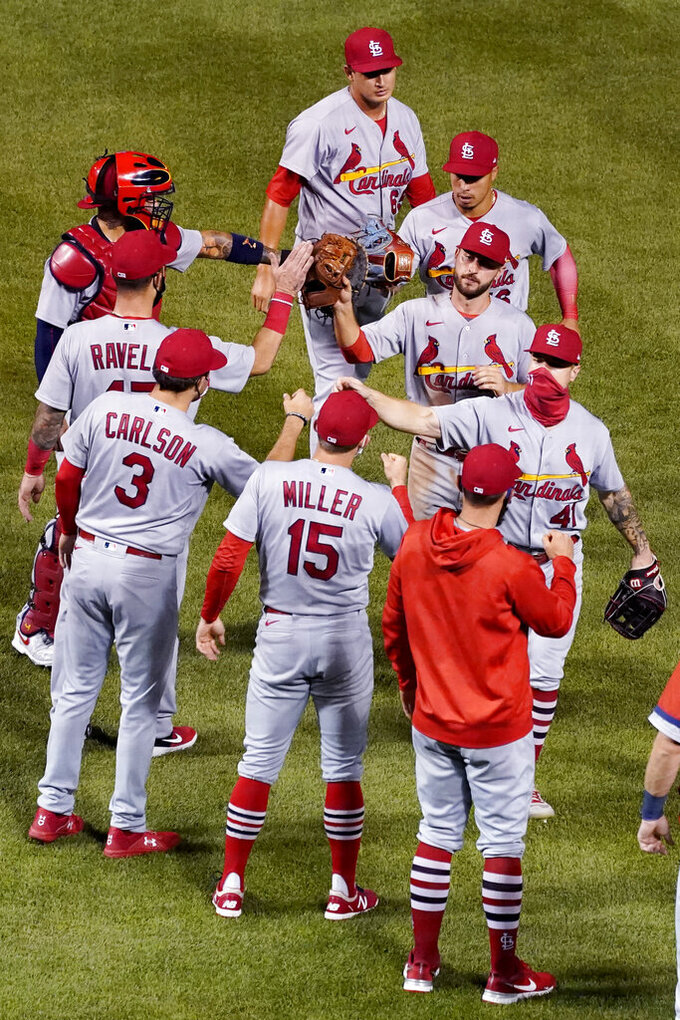 CHICAGO (AP) — Paul Goldschmidt hit a three-run homer off a struggling Jon Lester, and the St. Louis Cardinals gained ground in the NL Central race by beating the Chicago Cubs 7-3 on Sunday night.

St. Louis pulled within 1 1/2 games of Chicago with its third consecutive win over the division leaders. The longtime rivals have one game left in their pandemic-shortened season series on Monday.

The Angels have a won a season-high five straight. They trailed by at least three runs in each game against Houston before rallying.

Mike Mayers (1-0), the fifth of six Angels pitchers, retired the side in order in the eighth. Framber Valdez (3-3) took the loss.

It was 106 degrees at first pitch, a day after it was 109 for the start at Angel Stadium.

Garrett Richards (2-2) struck out nine and didn’t walk a batter over seven sharp innings to end a four-start winless stretch.

Trevor Rosenthal gave up Robbie Grossman’s leadoff double in the ninth before finishing for his first save with San Diego after joining the Padres in a trade from Kansas City, where he earned seven saves.

Matt Olson hit a pair of RBI singles for the A’s, who have lost four of five.

Bieber (7-0) only allowed one run and five singles, but the right-hander ran up his pitch count — 58 combined in the fourth and fifth innings — and needed Cleveland’s bullpen to finish things off.

Bieber came in leading the majors strikeouts and added to his total by reaching double-digits for the sixth time this season.

Brad Hand, the Indians’ fourth reliever, worked the ninth for his 11th save in 11 tries. It was his 100th career save.

LOS ANGELES (AP) — Matt Kemp hit a go-ahead, two-run homer in the eighth inning against his former team, and the Colorado Rockies sent the Dodgers to their first series loss of the season.

Kemp connected off Caleb Ferguson (2-1) for the sixth homer in a back-and-forth game between the NL West rivals. The Rockies won the last two in the series to boost their playoff hopes while curbing their 4-24 skid against the powerhouse Dodgers, who lost back-to-back games for only the third time this season.

Josh Fuentes hit an early two-run homer and Garrett Hampson added an RBI double for the Rockies, who were winless in their past nine series against Los Angeles since 2018. Colorado also won two straight at Dodger Stadium after losing 17 of its previous 18 here.

The Orioles won their third in a row over the Yankeees after losing 19 straight to them. New York has lost 13 of 18 overall.

The 24-year-old Kremer (1-0) came to the Orioles organization in July 2018 as part of the trade that sent Manny Machado to the Los Angeles Dodgers. He allowed one run, walked three and retired 14 of the final 15 batters he faced.

The game was played on the 25-year anniversary of the night Cal Ripken played his 2,131st consecutive game, which broke Lou Gehrig’s major league record.

Matt Joyce slapped an RBI single with two outs in the top of the 10th off John Curtiss (3-0) to put Miami ahead.

Lourdes Gurriel Jr. had four singles for the Blue Jays, who had lost the previous two games after winning the opening pair of a five-game series at Fenway Park. They have won eight of 12 overall.

Thomas Hatch (3-1) worked 1 2/3 innings of scoreless relief and Rafael Dolis got the final three outs for his second save. Matt Hall (0-2) got the loss.

The Tigers erased a four-run deficit by raking Minnesota’s relievers for eight runs in the late innings. The Tigers snapped a streak of five straight losses to the Twins.

Tigers reliever Kyle Funkhouser (1-1) earned his first career win and while Bryan Garcia pitched a scoreless ninth for his first big league save.

Keuchel (6-2) left the game with lower back stiffness after throwing a few warmup pitches before the sixth inning and is considered day to day. He threw 49 pitches, allowed two hits and struck out two.

The AL Central-leading White Sox went ahead 5-0 in the seventh on Encarnación’s three-run homer. Jose Abreu extended his hitting streak to 20 games.

The surging Mariners won their fifth straight and 10th of 13 after an 8-19 start.

Seager lined his sixth home run of the season in the first inning off Texas starter Jordan Lyles (1-4).

Ronald Guzman homered with one out in the ninth off Yoshihisa Hirano. But Hirano struck out Dietrich and Anderson Tejada to finish his first save.

SAN FRANCISCO (AP) — Donovan Solano hit a two-run, go-ahead homer in the sixth inning and the Giants beat the Diamondbacks.

Brandon Belt and Chadwick Tromp also went deep for the Giants, who improved to 7-2 against the Diamondbacks this season.

Solano hit the first pitch he saw from Alex Young (1-3) in the sixth for a two-run shot to left that erased a 2-1 San Francisco deficit. Belt came off the bench to deliver a pinch-hit solo shot in the seventh to extend San Francisco’s lead to 4-2 and continue his torrid streak at the plate. He’s hitting .491 (27 for 55) over his past 18 games.

San Francisco’s bullpen turned in terrific work in support of Johnny Cueto, as Caleb Barager (5-1), Jarlin Garcia, Tony Watson bridged the gap to Tyler Rogers, who notched the save.

ATLANTA (AP) — Freddie Freeman hit his second career grand slam — and second of the series — leading the Braves to a win over Patrick Corbin and the Nationals.

Josh Tomlin (2-2) allowed one run in six innings as Atlanta split the four-game series. Marcell Ozuna drove in four runs with three hits, including a homer and a three-run triple. Tyler Flowers had a two-run double.

With Atlanta leading 3-1 in the sixth, Kyle Finnegan replaced Corbin and loaded the bases by walking Dansby Swanson. Freeman followed with his seventh homer of the season, a drive into the seats in left-center.

Nationals general manager Mike Rizzo was ejected from a luxury suite after umpires said he was berating them. Crew chief Joe West said Rizzo had done the same thing earlier in the series.

NEW YORK (AP) — Jacob deGrom struck out 12 over seven innings, Aaron Nola was let down by lackluster defense and the Mets poured it on with a season-best 17 hits in a victory over the Phillies.

Pete Alonso homered twice, Jeff McNeil hit his first shot of the season, and Brandon Nimmo and Wilson Ramos also went deep for the Mets, who have won four of five. Dominic Smith had a career-high four hits, matched a franchise record with three doubles and drove in three.

Nola (4-3) was charged with three earned runs and six total over 5 1/3 innings. He struck out 10, walked one and allowed eight hits.

Richard Rodriguez (1-2) pitched a scoreless ninth for the win. He was one of five relievers that held the Reds scoreless over the final six innings.