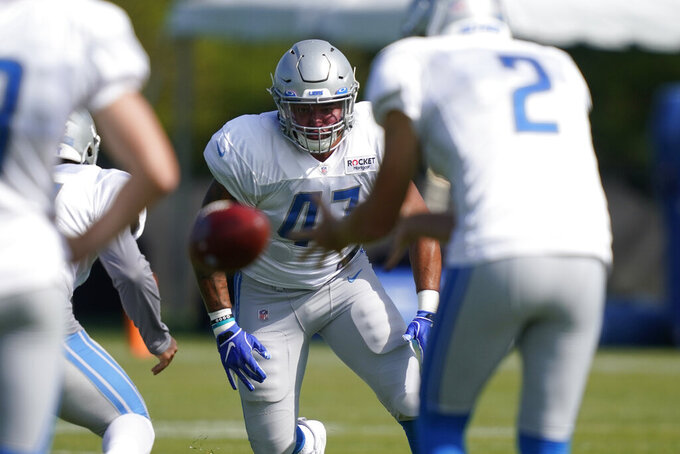 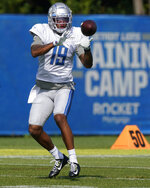 ALLEN PARK, Mich. (AP) — Kenny Golladay has earned the right to get paid well in the NFL. He plans do that in Detroit.

The Pro Bowl receiver, who has one year left on his deal, reiterated that he intends to sign a contract extension with the Lions.

“I want to be here,” he said Monday after the team's first padded practice. “I’m just going to let my agent and front office take care of that. Pretty sure something will get done.”

Clearly, the Lions want Golladay to stay on their roster for years to come.

“Hopefully, everything goes the way we want it to,” Lions coach Matt Patricia said.

Golladay is hopeful his agent, Todd France, and the Lions will agree on a new deal before the team opens the pandemic-altered season Sept. 13 at home against the Chicago Bears.

Golladay — and the Lions — were thankful he was on the field for practice after coming off the reserve/COVID-19 list nearly two weeks ago. Golladay said he briefly had a few symptoms, including a fever.

“Nothing major,” he said.

Golladay is a major part of an offense led by quarterback Matthew Stafford, who appears to be healthy after missing eight games last year with a back injury. Stafford has plenty of options when he drops back to pass with Golladay, Marvin Jones and Danny Amendola at receiver along with tight end T.J. Hockenson. The team also drafted running back D'Andre Swift to rotate with Kerryon Johnson in the backfield.

Jones and Johnson seem to be healthy after enduring injury-shortened seasons.

Golladay is the only player to have a pair of 1,000-yard receiving seasons within the first three years of his career with the franchise. He led the league with 11 receiving touchdowns in 2019, making him the first Lions player to do that since Cloyce Box in 1952. He became the fifth player since the 1970 merger to lead the NFL in receiving touchdowns despite playing with three starting quarterbacks in the same season.

“He’s not going to sneak up on anybody, that’s for sure,” Patricia said.

Golladay refuses to rest and forget the hard work he put in after not getting one scholarship offer from a program at the top level of college football. The Chicago native settled on a chance to play at North Dakota, later transferred to Northern Illinois, and was still available in the third round when Detroit drafted him.

Three years later, a lot of teams in the league wish they drafted the humble, big-play receiver — or that he will be willing to leave Detroit as a free agent or ask for a trade.

“He’s an unbelievable guy,” Patricia said. “He’s great, obviously super-talented, and does amazing things for us on the football field, but he works really hard."

NOTES: The Lions plan to eventually lean a lot on cornerback Jeff Okudah after drafting him No. 3 overall this year, but they lined him up as a backup Monday to give him more time to develop. “A lot of the rookies, we’re trying to take it slow with,” Patricia said. Okudah slipped and fell during a one-on-one drill with Golladay, letting the standout receiver easily make a catch. ... DT Kevin Strong, G Beau Benzschawel and TE Matt Sokol did not practice Monday: “I’m not going to dive into injuries or anything like that or any of those details," Patricia said. "I expect those guys to be back out there as soon as they can.”