GOP congressman at risk of losing seat over gay marriage 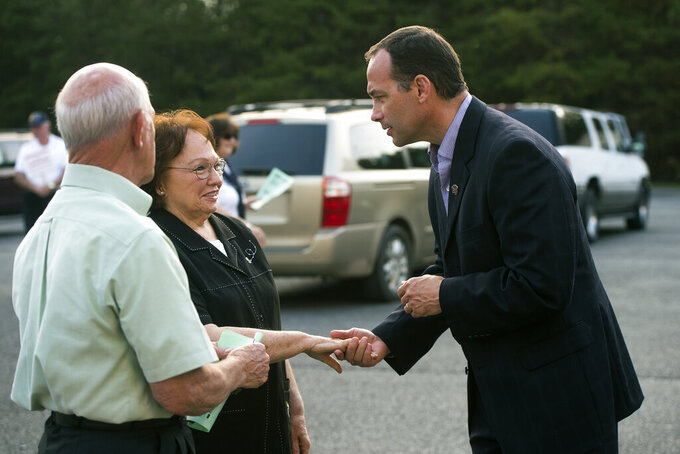 RICHMOND, Va. (AP) — Freshman Virginia GOP congressman Denver Riggleman has a conservative voting record and the strong backing of President Donald Trump but is still in danger of losing his seat this weekend in a Republican nominating contest.

The reason: he officiated a gay marriage, sparking a fierce backlash among some of his socially conservative constituents who questioned Riggleman's adherence to the party’s values.

Virginia's mostly rural 5th Congressional District will play host to the latest culture clash within the Republican Party on Saturday, when delegates pick a candidate via a drive-thru convention amid the coronoavirus pandemic.

Riggleman, a member of the conservative House Freedom Caucus, upset many Republicans in his district last summer when he married two male campaign aides. Local GOP groups quickly criticized Riggleman and have rallied behind a well-organized opponent for the Republican nomination.

Riggleman said he understands why some people may not support gay marriage, but said the Republican tent is big enough to accommodate opposing views on the issue.

“I believe that individual liberty is one of the most important things Republicans can stand for, so I don’t regret officiating that wedding at all,” Riggleman said.

The backlash against Riggleman comes amid the Trump administration’s efforts to slow or reverse gains made by LGBTQ Americans. For example, it has restricted military service by transgender people and argued in a Supreme Court case that the federal civil rights law does not protect LGBTQ people from discrimination at work.

But Riggleman has lined up support from key Republicans. Trump has endorsed him, tweeting that Riggleman is “is a true CONSERVATIVE leader." Liberty University President Jerry Falwell, a high-profile evangelical leader whose school is adjacent to Riggleman's district, is also backing Riggleman.

Running against him is Bob Good, a former top official at Liberty's athletic department, who has pledged to restore “Judeo-Christian” values to Congress. He’s also a hardliner on immigration and wants English to be the official language of the United States.

Riggleman, a distillery owner and Air Force veteran, ran unsuccessfully for governor in 2017 on a populist platform before winning a seat in Congress in 2018. Riggleman easily won that race, which made headlines when his Democratic opponent accused him of being a “devotee of Bigfoot erotica.”

Saturday's drive-thru convention will be held at a Lynchburg-area church near Good's home. It will be the only place delegates can cast a ballot in a district that stretches from northern Virginia to the North Carolina border and is larger in land mass than New Jersey.

Riggleman said a small coterie of Republican insiders are trying to rig the contest against him forcing the nomination process to be decided with a convention instead of a primary. Conventions favor more conservative candidates and have been used for years by Virginia Republicans to block moderate Republicans from winning office. Riggleman has tried unsuccessfully to block the convention or move its location.

Republican infighting over whether candidates are sufficiently conservative has been common in Virginia while the party has seen its influence diminish. Democrats have won majorities at the state legislature and in the congressional delegation in recent years and no Republican has won a statewide race is more than a decade.

The 5th Congressional District has been in Republican hands for a decade, but four Democrats are vying for their party’s nomination to challenge either Riggleman or Good.

Kyle Kondik, who analyzes elections for the University of Virginia Center for Politics, said the district is likely to stay in Republican hands no matter who wins Saturday. But he said a victory by Good may make the race more competitive and entice national Democratic and liberal groups to spend money on the contest.

“It would pique their interest a little bit more.” Kondik said.