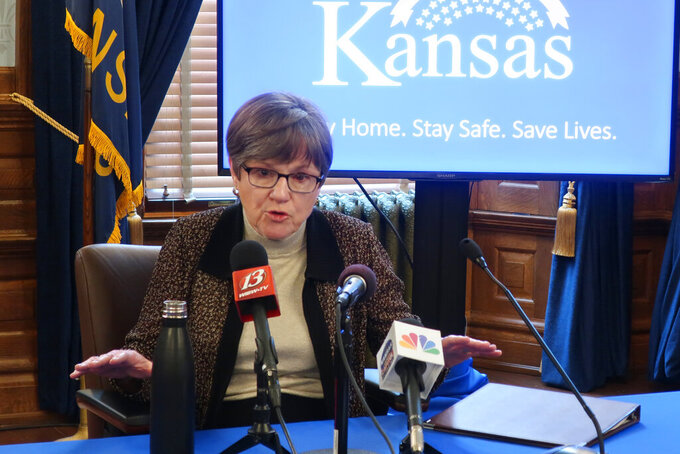 In this photo from Wednesday, May 6, 2020, Kansas Gov. Laura Kelly answers questions about the coronavirus pandemic during a news conference at the Statehouse in Topeka, Kan. Kelly's top Republican critic in the Legislature has launched a new effort to curb the governor's power during emergencies. (AP Photo/John Hanna)

Senate President Susan Wagle, a Wichita Republican and U.S. Senate candidate, said she has directed four chairs to convene in-person Statehouse meetings of their committees before May 21, the last and only remaining day the GOP-controlled Legislature is set to be in session this year. Lawmakers have been on an extended spring break since March 20 because of the coronavirus pandemic.

Legislators attempted in March to check the governor's power in emergencies, passing a resolution to give their leaders the power to overturn Kelly's executive orders. But when Republican leaders overturned an order limiting in-person religious gatherings, Kelly sued and the Kansas Supreme Court reinstated her order on technical grounds.

The Legislature did not seek to check the governor's emergency powers when Republicans Sam Brownback and Jeff Colyer held the office before Kelly. And less than a year ago, the Legislature unanimously approved a resolution extending a disaster declaration Kelly issued over flooding into January of this year, without attempting to curb the broad power granted to a governor by state law when such a declaration is in force.

“Whenever there's an emergency, everybody comes together and gets behind the governor, regardless of the party of the governor,” said House Minority Leader Tom Sawyer, a Wichita Democrat. “Senator Wagle has kind of changed that tradition. She's decide to make emergencies partisan."

Kansas joins other states, including Michigan and Ohio, where governors or state public health officials have faced a backlash from legislators frustrated with the executive orders or what they perceive as the slow pace of reopening the economy.

In Kansas, top Republican legislators have grown increasingly frustrated with Kelly as she avoided their oversight by issuing a second emergency declaration after her first expired May 1. The second declaration is in effect through May 14, yet Kelly's plan for a phased-in reopening of the economy calls for some restrictions to remain in place until June 15.

House Speaker Ron Ryckman Jr, a Kansas City-area Republican, questioned whether Kelly has the legal authority to keep issuing new disaster declarations for the same emergency as a way to avoid asking the Legislature or its leaders to extend the existing one.

Lawmakers could attempt to clarify that issue. Some Republicans also have argued for legislative oversight of a governor's decisions, and some GOP conservatives want to limit the governor's power to restrict church gatherings, close businesses or ban gun sales, which Kelly hasn't done or suggested she would do.

Kelly also has not extended the May 10 deadline for home and business owners to pay half of their local property taxes, something Wagle has advocated.

“Our forefathers created checks and balances on political authority," Wagle said Thursday. "Uncertainty abounds regarding the governor’s plan to re-open Kansas safely and what she may do in the coming months when the Legislature is not in session. Those issues must be addressed.”

Senate Majority Leader Jim Denning, another Kansas City-area Republican, said lawmakers need to set up oversight over how the state spends $1.25 billion in federal coronavirus aid, adding that having no oversight would be “unprecedented.”

“The most important duty delegated to our legislative body is to be the fiscal steward of taxpayer funds," Denning said.

Kelly announced late Wednesday that she had created a coronavirus recovery team that will include legislators from both parties. Spokeswoman Lauren Fitzgerald said Thursday that the governor is pursuing “a thoughtful, collaborative, transparent and bipartisan approach.”

Senate Minority Leader Anthony Hensley said Wagle is “desperately seeking attention” for a foundering Senate campaign with “one political stunt after another.” He also said Republicans are flummoxed because Kelly enjoys public support for "an extraordinarily effective” coronavirus response.

“They just don't know how to handle somebody that can be that effective,” Hensley said. “They're used to incompetence.”