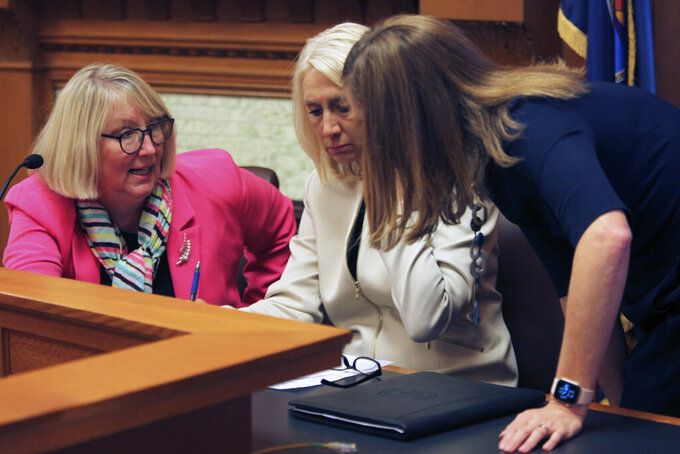 Kansas state Sens. Molly Baumgardner, left, R-Louisburg; Renee Erickson, center, R-Wichita, and Dinah Sykes, D-Lenexa, huddle during talks with the House over the final version of school funding and education policy legislation, Thursday, May 6, 2021, at the Statehouse in Topeka, Kan. Their talks are under way even though Republican legislative leaders and Democratic Gov. Laura Kelly have not struck a deal on education issues. (AP Photo/John Hanna)

TOPEKA, Kan. (AP) — Conservative Republicans set aside their most ambitious proposal for helping Kansas parents move their children into private schools so that lawmakers could forge a bipartisan compromise Thursday night on education funding and policy.

Three state senators and three House members drafted the final version of a bill funding public schools as top Republicans in the GOP-controlled Legislature negotiated privately with Democratic Gov. Laura Kelly over the measure. They had yet to strike a deal Thursday night, but Republicans said GOP leaders and the governor were close.

Conservative wanted to tie an increase in aid to the state's 286 local public school districts to “school choice” initiatives but were unable to pass a bill with that combination. Democrats and education groups would prefer to provide the money with no new strings.

The education bill includes Kelly's proposed spending on schools, tied to a proposal to expand an existing program for providing private-school scholarships to students in underperforming public elementary schools. It also includes a raft of other policies, including limits on remote learning that became prevalent during the COVID-19 pandemic.

“There are definitely pieces in it that I don't love, but at the end of the day, we're fully funding schools,” said Senate Minority Leader Dinah Sykes, a Lenexa Democrat and one of the measure's drafters.

Lawmakers didn't yet have a promise from Kelly that she'd sign the measure they drafted. But House Speaker Ron Ryckman Jr., an Olathe Republican, said she and GOP leaders had moved closer to full funding for schools with “an expansion of options for parental choice."

Mike Pirner, spokesperson for Senate President Ty Masterson, an Andover Republican, said in text to The AP: “All I can say is it's close and a lot of stakeholders are talking.”

The Legislature cannot wrap up its business for the year without finishing work on a spending blueprint for state government approaching $21 billion for the budget year that begins July 1. Funding for public schools would account for $5.2 billion in spending.

GOP leaders hoped to adjourn late Friday or on Saturday.

Kelly proposed an increase in education funding of $263 million, or 5.3%, in line with a law enacted in 2019 to resolve a 2010 lawsuit against the state brought by four school districts. That lawsuit remains before the Kansas Supreme Court, and Democrats believe failing to provide as money as Kelly has recommended will prompt the justices to intervene.

“The full funding of education is really the top priority,” said Mark Tallman, a lobbyist for the Kansas Association of School Boards. “We thought the education savings account were just too wide open in a lot of ways.”

House Republicans' combination of proposals failed in the Senate on a 20-20 vote last month, lessening some conservatives' expectations for what can pass.

The bill would modify a program that gives a state income tax credit for donations to scholarship funds that help at-risk students attend private schools. The total tax credits would remain capped at $10 million a year, but any elementary or middle school student who receives free or reduced-cost lunches would be eligible for scholarships.

But conservatives did not press for the more expansive savings-account plan in talks between the House and Senate, leaving the issue to next year.

“Though they're a wonderful tool that can help at-risk kids, it wasn't something that we could find overall consensus on at this time,” said Rep. Kristey Williams, an Augusta Republican and the chair of a House committee on education spending.

The debates over K-12 funding and the rest of the budget were complicated by questions about higher education funding.

Kelly's budget director, Adam Proffitt, told lawmakers in a memo Sunday that the U.S. Department of Education is requiring states to maintain “historic funding” for higher education to receive their full share of coronavirus relief funds.

Proffitt recommended an additional $53 million for the next budget and $106 million more for the budget year beginning July 1, 2022.

Some Republicans were skeptical, but lawmakers working separately on parts of the budget outside K-12 spending agreed to include the first $53 million for the next budget year.