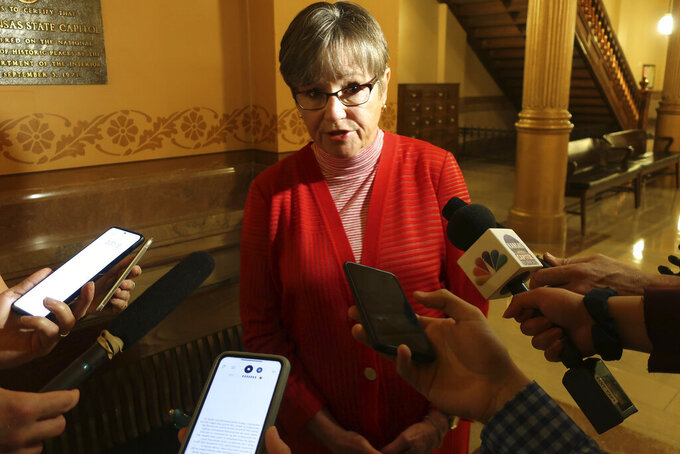 In this photo from Thursday, June 10, 2021, Kansas Gov. Laura Kelly answers questions from reporters at the Statehouse in Topeka, Kan., about the state of emergency in place for the coronavirus pandemic. The Democratic governor wants to keep the state of emergency in place at least through August 2021, but top Republican lawmakers are deeply skeptical and have the power to end it. (AP Photo/John Hanna)

TOPEKA, Kan. (AP) — Kansas will struggle to vaccinate residents and thousands of families will lose extra food aid because top Republican legislators on Tuesday ended a state of emergency for the coronavirus pandemic, one of Democratic Gov. Laura Kelly's top aides said.

Will Lawrence, the governor's chief of staff, said Kansas won't be able to use its National Guard to distribute vaccines or personal protective equipment. He said it's “just going to be more difficult” for state agencies to address COVID-19.

Senate President Ty Masterson announced the cancellation of a meeting of eight leaders of the Republican-controlled Legislature that had been scheduled for Tuesday afternoon. A law enacted in late March required the legislative leaders to sign off on an extension, and Masterson's announcement meant the state of emergency that had been in place since March 2020 would expire at the end of Tuesday.

GOP leaders said a decline in new COVID-19 cases in recent months means Kansas no longer faces an emergency. But Kelly accused them of “political obstruction.”

“A state disaster response has never been, and should not be, political,” Kelly said in a statement.

In neighboring Missouri, Republican Gov. Mike Parson's emergency declaration is set to run through Aug. 31. However, more than a dozen states have announced the end of emergency declarations through actions by governors, lawmakers or judges, including Massachusetts and Vermont on Tuesday.

Six of the eight Kansas legislative leaders who were to meet Tuesday are Republicans, and all six opposed an extension ahead of the gathering. They said state agencies can manage the remaining COVID-19 response without extra power given to them by law during an emergency.

“It is time for Kansas to return to normal,” Masterson, an Andover Republican, said in a joint statement with two other top GOP senators who'd have voted on an extension.

Kelly and Republican lawmakers have been at odds over her administration's response to the pandemic nearly since spring 2020. They've forced her over time to accept ever greater limits on the governor's power to keep the state of emergency in place.

She told reporters last week that she wanted to keep the state of emergency in place until the end of August. GOP leaders signaled in late May that they wouldn't approve any extensions beyond Tuesday.

In a letter Friday to top lawmakers, Kelly outlined a plan to wind down emergency operations and said she would let seven executive orders expire.

The letter said Kelly would keep only two executive orders in place. One mandated that state-licensed nursing homes test their residents and staff regularly for COVID-19, and another granting temporary permission for medical personnel and students to give COVID-19 vaccinations.

Lawrence said those orders would expire at the end of Tuesday. That shouldn't affect the ability of pharmacies to give the shots, but he said paramedics and medical and nursing students won't be able to do so. The state Department of Health and Environment might have the authority to require nursing home testing. Lawrence said.

He and other Democratic officials said the state will lose $14.5 million a month in extra federal aid for 63,000 households — an average of $230 a month each.

Senate Minority Leader Dinah Sykes said the extra food aid frees up money that families can use to pay rent and utility bills.

"We're asking them once again to pick and choose on how they will survive,” Sykes, a Lenexa Democrat, said during a Statehouse news conference.

Meanwhile, COVID-19 immunizations in Kansas have slowed since early April. The state health department said 43.3% of the state’s 2.9 million residents — or about 1.26 million people — had received at least one of two shots as of Monday.

“It’s going to make us take longer to get to that herd immunity, so I do think there’ll be more hospitalized and more people will die,” said House Minority Leader Tom Sawyer, a Wichita Democrat.

Top House Republicans said Kelly failed to make a strong case for continuing the state of emergency, particularly when she was letting most of her executive orders expire.

“There are adequate medical personnel to meet the current demand for vaccines and the regular authority available to the governor under the laws of our state is sufficient to meet these needs,” House Speaker Ron Ryckman Jr., of Olathe, said in a joint statement with two other top House Republicans.