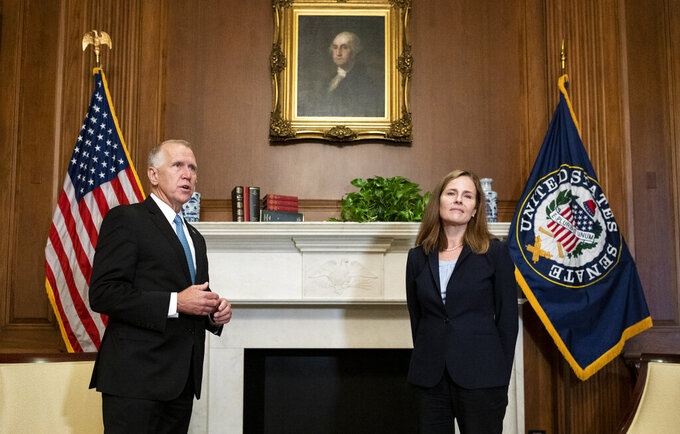 WASHINGTON (AP) — President Donald Trump’s coronavirus diagnosis was a moment of reckoning for his Republican Party, whose leaders largely adopted his strategy of playing down the disease but are now confronted with a stark political nightmare a month from Election Day.

The president’s infection thrust the pandemic front and center when Republicans would rather be talking about Trump’s Supreme Court nominee, law enforcement or the economy as early voting is underway in most states. They include Iowa and North Carolina, states that Republicans must win to maintain their three-vote edge in the Senate.

On Saturday, another Republican senator, Ron Johnson on Wisconsin, announced he has tested positive for the virus, the third GOP senator this past week.

With Trump in Walter Reed military hospital for treatment and quarantine, the virus seemed to spill into every corner of the party. Tests came back positive for Trump campaign manager Bill Stepien, Republican Party Chair Ronna McDaniel and for the Republican senators Mike Lee of Utah and North Carolina's Thom Tillis, a vulnerable incumbent who announced Friday he would quarantine for 10 days at the peak of election season.

The pandemic even spread to a subject the GOP hoped to be its safe harbor in the campaign's closing weeks — the looming confirmation of Trump's Supreme Court nominee, Amy Coney Barrett. Videos of an unmasked Lee mingling with other conservative luminaries at a White House ceremony for Barrett ran relentlessly on cable news, turning the party's push to reshape the court into a story about the spread of a deadly virus.

The infections of Lee and Tillis, both members of the Senate Judiciary Committee, call into question whether Republicans can meet their aggressive timeline of confirming Barrett before Election Day. Johnson is not on the panel and was not at the Rose Garden event.

“It’s challenging," said Glen Bolger, a Republican pollster active in five competitive Senate races. "It would be better if the discussion was about jobs and the economy, or even Joe Biden is going to be held captive to the left. But the election is going to be about coronavirus, and that’s not favorable terrain for Republicans.”

In private conversations over recent months, Republicans had reached a level of stoicism about how their fates were yoked to the president’s, even as he ricocheted from outrage to outrage and denied the severity of a pandemic killing thousands of their constituents. Their inability to escape Trump is due partly to their embrace of his personality and agenda, but also to a reality of the nation's polarized politics — legislators increasingly rise or fall with their party's presidential candidate.

“People vote for the uniform, red or blue,” Bolger said. “As the president goes, so goes a lot of down-ticket Republicans.”

That's required Republican legislators in competitive states to walk what GOP pollster Whit Ayres called “a fine line” — putting enough distance between themselves and Trump to pick off swing voters without alienating the president's loyal base who will punish any Republican who disagrees with him.

The reemergence of the pandemic puts Trump back where he has been most of his four years in office: at center stage. But it may also remind voters of health care and the GOP's efforts to repeal the Affordable Care Act, the centerpiece of the Democrats' election messaging.

The Supreme Court is scheduled to hear arguments in a GOP case seeking to overturn the health care law shortly after the election. Earlier this past week, six Republicans, including Collins, Alaska Sen. Dan Sullivan and Gardner, joined Democrats in a procedural vote to try to protect it, a sign of how vulnerable the senators feel on the issue.

The political peril of the looming court case was evident Friday night at the first debate in the Colorado Senate race. Gardner's Democratic challenger, former Colorado Gov. John Hickenlooper, relentlessly attacked the incumbent Republican about his repeated efforts to repeal the Affordable Care Act — and the dangers of Barrett invalidating the law once she's approved.

“Are we really, in the middle of a pandemic, going to strip away health care and protections for people with preexisting conditions?” Hickenlooper asked, noting Gardner supported Trump's push to repeal the law in 2017.

Republicans have been sustaining blows from Democrats over the repeal push for years, but now may also be haunted by their association with Trump's live-and-let-live approach to the pandemic. In March, Arizona Sen. Martha McSally likened suggestions people dramatically alter their lifestyles to “panic.”

“It doesn’t mean that everybody needs to stay home, not go to work, not go on spring break, not live their lives," she said. "That is actually too much of a panic reaction.”

And a month ago, Ernst took criticism after she said she was “skeptical” of government statistics on the coronavirus and wondered if they had been inflated.

Trump's quarantine sidelines him from the campaign trail during a critical stretch. Several Republicans doubted the president will hit pause, praising his stamina, and some suggested the diagnosis might “soften” voters who have grown tired of Trump’s brash approach to governing.

“He works so hard to be a tough guy, but this may soften him a little bit and make people go, ‘OK, you know, he’s human, too,’” said Rep. Morgan Griffith, R-Va., who was previously infected with the virus.

“You always root for someone who’s down,” he said.

Still, it has been an anxious week for the party. The Senate races are tied far more to perceptions of Trump, including his handling of the pandemic, than the candidates’ specific messaging on the virus, Republican pollster Ed Goeas said.

In fact, Goeas argued that Trump’s belligerent performance during Tuesday’s debate did more to hurt his chances of recouping wayward Republicans and hesitant independents, a development that could hurt GOP Senate candidates in tight contests.

“My bigger concern was the debate,” said Goeas, whose firm is polling in several competitive Senate races. “He so badly performed in that debate, that not only could that have been the end of the Trump presidency and chances of winning reelection, but that it may have put another nail in the coffin of losing control of the Senate.”