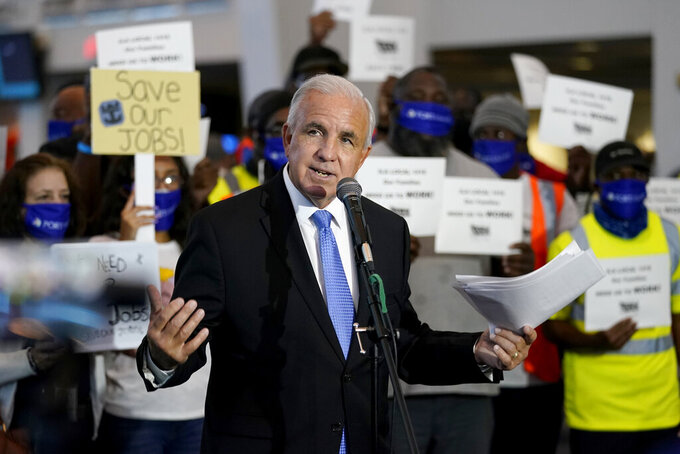 Miami-Dade County Mayor Carlos Gimenez speaks during a protest at PortMiami by workers in the cruise ship industry wanting to return to work, Wednesday, Oct. 21, 2020, in Miami. The Centers for Disease Control and Prevention (CDC) issued a No Sail Order for cruise ships through Oct. 31 during the coronavirus pandemic. (AP Photo/Lynne Sladky)

The GOP will have a 16-11 edge in Florida's House delegation in the next Congress.

District 27 covers much of the central Miami area and has generally been considered Democratic. Salazar sharply criticized Shalala for failing to report several stock sales in a timely fashion, as required.

In neighboring District 26, Gimenez won a seat that has frequently shifted between the two parties. Gimenez, a former firefighter and mayor since 2011, prevailed over Mucarsel-Powell in a district that stretches from the Miami suburbs to Key West.

Gimenez made restoring the economy amid the coronavirus pandemic one of his top campaign issues. Mucarsel-Powell also stressed recovery from the pandemic as a major priority.

"I promise you I’ll be a much more effective congressperson and reach across the aisle,” Gimenez said in a statement. “I won’t be as partisan as my predecessor.”

Mucarsel-Powell initially refused to conceded, saying all votes should first be counted. Mucarsel-Powell, the first person from Ecuador to serve in the U.S. Congress, won the seat two years ago over then-incumbent GOP Rep. Carlos Curbelo.

Shalala defeated Salazar by about 6 percentage points two years ago in District 27 but was defeated handily this time.

Franklin is a Lakeland city commissioner, former Navy pilot and owns a small business. Cohn is a former television journalist. The district runs from just east of Tampa to just west of Orlando.

Crist was a Republican until his final year as governor, but left the party in 2010 as an independent before becoming a Democrat in 2012. He also unsuccessfully ran for the U.S. Senate.

GOP conservative star Rep. Matt Gaetz held off a challenge in his Panhandle District 1 from Democrat Phil Ehr. Although it is a GOP stronghold — Gaetz won last time with two-thirds of the vote — Ehr had a long military career in an area where that is highly valued.

GOP Rep. Mario Diaz-Balart won another term because he had no Democratic or write-in opposition in the Miami-area District 25.