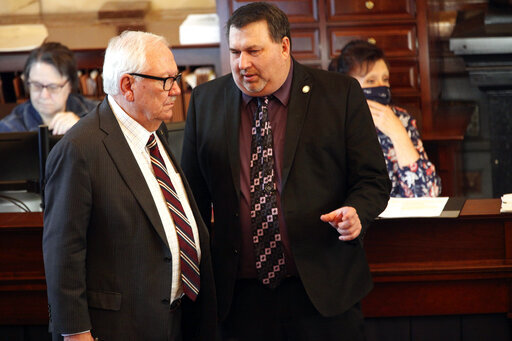 TOPEKA, Kan. (AP) — Republican legislators don't yet agree on how much time to give the Kansas Department of Labor to upgrade aged technology for an unemployment system that for months has been plagued by problems and the frequent target of scammers.

The House and the Senate have approved legislation aimed at modernizing the system. Both chambers' versions would give the GOP-controlled Legislature more oversight of the department's upgrades, set aside up to $500 million in federal COVID-19 relief dollars to shoring up the state fund that provides benefits and revise the tax rates paid by employers to help finance benefits in hopes of making the assessments fairer.

The Senate approved its version Wednesday, 40-0, the same day it also unanimously confirmed Democratic Gov. Laura Kelly's appointment of Amber Shultz, a former Lawrence city official with an information-technology background, as the department's top administrator. Under the Senate's bill, top legislative leaders would set the deadline for technology upgrades.

The House's version, which was approved in early March with no Democratic support, would require the department to finish its upgrades by the end of 2022 — a deadline the department deems unrealistic. Lawmakers expect negotiators for the two chambers to draft the final version of the legislation as early as next week.

The department estimated that it paid out $290 million in fraudulent unemployment claims last year, but a legislative audit estimated the figure at $600 million, suggesting that nearly 1 in every 4 claims was bogus. GOP lawmakers have worried those claims will compel employers to pay higher taxes than they should to replenish the benefits fund.

House Republicans have argued that the modernization legislation needs to set a specific deadline for the upgrades so that the work doesn't drag out. Kelly included $37.5 million in her budget for the upgrades.

“When we shake the trees, generally, they respond and there are improvements made,” Rep. Sean Tarwater, a Stilwell Republican and the House commerce committee’s chair, said after it finished with the bill in late February.

The state previously spent about $51 million on upgrading the department's technology from 2004 until the project was canceled in December 2011 under Republican Gov. Sam Brownback, according to a memo from the Legislature's research staff. Some Republicans worried at the time that the project was plagued by wasteful spending, and the researchers' memo said “approximately half” of the work was completed.

Kelly and her staff have suggested that the cancellation of the previous project left Kansas unprepared for last spring's surge in unemployment claims at the outset of the coronavirus pandemic and a wave of fraudulent claims. They also have blamed the old technology for multiple problems in getting benefits to jobless workers.

The department shut down its unemployment system for several days over the winter to install new, anti-fraud security protocols.

Both versions of the unemployment modernization bill would establish a 13-member council to oversee the department's technology upgrades, with 10 members appointed by legislative leaders, two by the governor and either the department's head or her appointee serving.

Democrats and labor unions argued that the House's version of the bill contained little or nothing for workers.

But Senate Minority Leader Dinah Sykes, a Lenexa Democrat, said her chamber's version "puts us on the road to fixing things.”

“It's not an overnight fix,” she said.