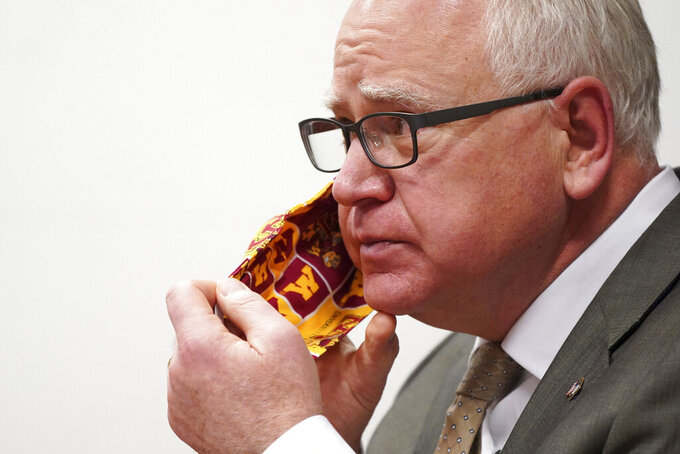 FILE - In this Jan. 26, 2021 file photo, Minnesota Gov. Tim Walz takes off his University of Minnesota cloth face mask to answer a question from a reporter during a press conference in St. Paul, Minnesota will lift nearly all its COVID-19 restrictions just before Memorial Day weekend and drop its statewide mask requirement once 70% of residents age 16 and older get their first dose of vaccine, but no later than July 1, Gov. Walz announced Thursday, May 6. (Anthony Souffle/Star Tribune via AP)

Rep. Barb Haley, of Red Wing, and Sen. Jeff Howe, of Rockville, touted a bill that they said would preserve Walz's ability to procure and distribute vaccines, and to obtain federal aid, while restoring the normal balance of power between the governor and Legislature.

But the two lawmakers — joined by Senate Majority Leader Paul Gazelka, of East Gull Lake, and House Minority Leader Kurt Daudt, of Crown — said they got a cold reception late last week when they presented Walz with their proposal, which they said is based on Alaska's “off-ramp" for ending its emergency declaration.

"I counted up the days this morning — it's been nearly 500 days," Haley told reporters.

Walz spokesman Teddy Tschann said the governor is committed to working with lawmakers but the plan has serious holes.

“Unfortunately, the proposal put forward by Minnesota Republicans is not a serious plan – it would slow down vaccination, jeopardize hundreds of millions of dollars in hunger relief, and end the eviction moratorium overnight with no plan to provide an off ramp for renters or landlords as we come out of the pandemic,” Tschann said in a statement.

Walz is required to call a special legislative session by June 14 as a condition for extending his powers under the peacetime state of emergency that he declared in March 2020. Currently 44 states are under such declarations. The GOP-controlled Senate has voted to end his emergency powers eight times since May 2020, while the House GOP minority has tried unsuccessfully to force a vote 19 times but has been blocked by the House Democratic majority.

But the main work of the special session will be passing a $52 billion two-year budget, which lawmakers were unable to finish during their regular session. Negotiations are continuing in hopes of averting a July 1 state government shutdown.

The governor has already rolled back most of the statewide restrictions he imposed with his emergency powers, including a statewide mask mandate. Minneapolis and St. Paul this week lifted their local mask requirements. Heath Commissioner Jan Malcolm and the state's infectious disease director, Kris Ehresmann, told reporters Wednesday that they couldn't think of any other communities that still had mask mandates in place.

However, private businesses can require masks for employees and customers, and a mandate remains in place in schools.

Malcolm noted during their briefing that Minnesota's COVID-19 metrics continue to show encouraging improvements. The state reported just 128 new cases and no new deaths between Sunday afternoon and early Tuesday. She said the state's seven-day average test positivity rate has fallen to 3.4%, which is now below the state's “caution level." The state is down to only 12% of its hospital beds being used for COVID care. And over 70% of residents over the age of 16 in the Minneapolis-St. Paul metropolitan area have now had at least one vaccine dose, she said.

The percentages are lower in the rest of Minnesota but the state as a whole is still much less vaccine-hesitant than the rest of the country, said Dr. Nathan Chomilo, the department's vaccine equity director. First-dose vaccination rates have been highest among Minnesotans identifying as Asian or Pacific islanders, he said, but the Black and Hispanic communities have made some of the state's highest gains in recent weeks.