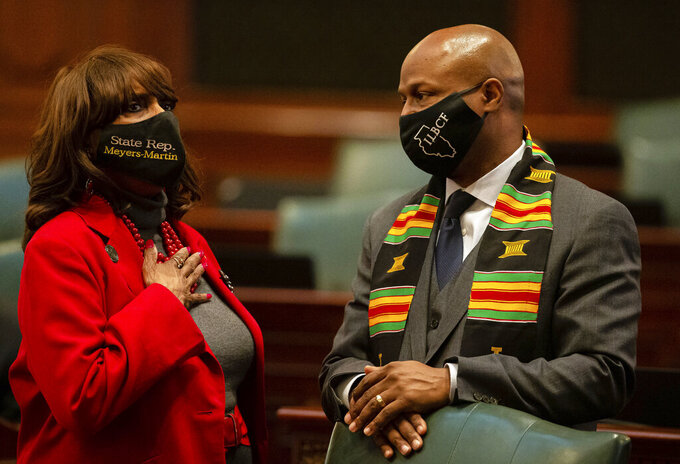 SPRINGFIELD, Ill. (AP) — Majority Democrats in the Illinois House adopted procedural rules on Wednesday that the GOP complained are nearly identical to the suppressive ones they labored under in the decades-long rule of former Speaker Michael Madigan.

One month after celebrating new leadership and renewed openness, the Democratic-controlled House convened in its state Capitol chamber for the first time in nearly a year and voted 70-44 on operating rules for its new session. The rules include permission to conduct legislative work remotely by video because of the coronavirus pandemic.

That was among a handful of prominent changes made by the Legislature. While new Speaker Emanuel “Chris” Welch of Hillside promised an open, inclusive process, irked Republicans said they saw few of their ideas incorporated.

“The majority party has treated us like mushrooms: Keep us in the dark and feed us manure,” Plainfield Republican Rep. Mark Batinick said. “That’s OK, because you have the ability in the numbers to do that. The problem is, when you’re treating us that way, you’re also treating the entire general public that way.”

Even the other major change, limiting the speaker and minority leader to five two-year terms after the ouster last month of Madigan, the Chicago Democrat who ruled the House for 36 of the past 38 years, drew mockery from Republican Leader Jim Durkin of Western Springs. He said House Republicans term-limited their leaders four years ago and the Senate imposed limits in 2017.

Madigan's 50-year Statehouse career was abruptly derailed by an ongoing federal investigation into a lobbyist bribery scheme which has implicated him. He has not been charged with a crime and has denied wrongdoing. But until last month, the “Velvet Hammer" ruled the House — and protected his majority — for decades by controlling the fate of virtually every piece of legislation. Those he favored made it to the floor for a vote. The rest went nowhere.

Majority Leader Greg Harris, a Chicago Democrat, declared a “historical turning point” in presenting the new outline on Wednesday. He said Welch sought input from House members, that more than one-third of House members participated in video discussions of the rules or submitted suggestions, and that Welch has determined that the process is ongoing.

“We are sent here to support the kind of ideals that folks who vote for us send us down here to promote,” Harris said. “We adopt rules and laws and resolutions for the state of Illinois that bring these values into practice in our everyday lives. It’s a competition of ideas, and we need some organization ..., some guide paths to ensure that all of these ideas are appropriately heard.”

But aside from term limits and remote legislative work, the only other notable rule change requires that generally all legislation introduced will be assigned to a committee for a public hearing, and not die in the Rules Committee, Madigan's graveyard for Republican bills deemed unfavorable.

Rep. Avery Bourne, a Morrisonville Republican, got Harris to acknowledge that there's no guarantee that, once assigned to committee, a bill will get a hearing. She ridiculed Harris' depiction of a House hosting a competition of ideas.