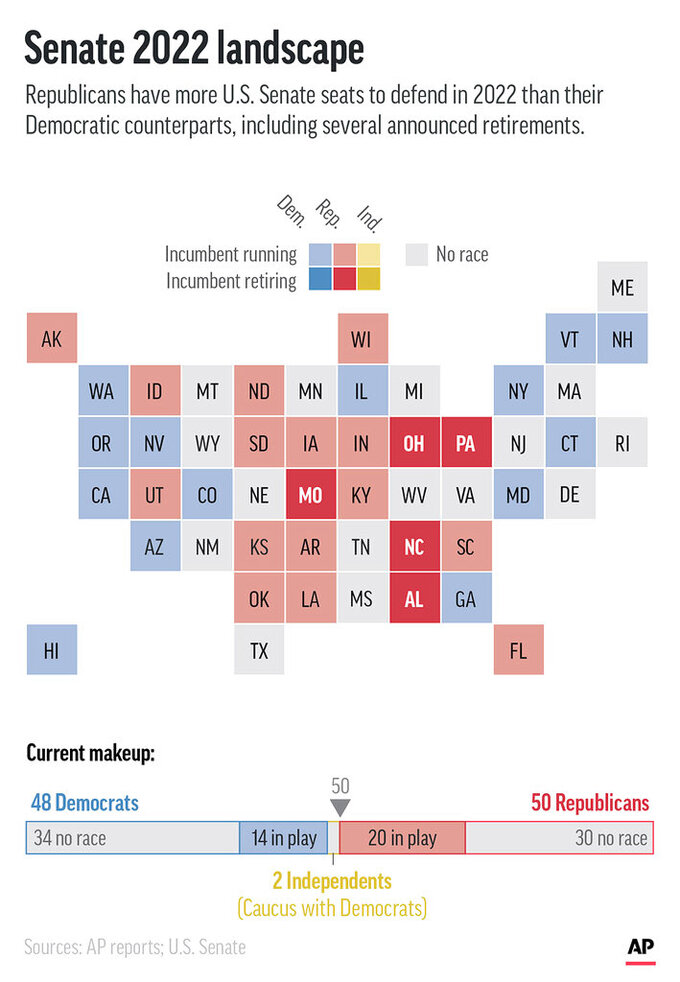 COLUMBIA, Mo. (AP) — Sen. Roy Blunt of Missouri said Monday he will not seek reelection, making him the fifth Republican in the Senate to bow out rather than seek another term in a party searching for direction after President Donald Trump.

Blunt, who turned 71 in January, was widely expected to seek a third term in 2022. Before election to the Senate he served seven terms in the U.S. House. He also served two terms as Missouri’s secretary of state from 1985 to 1993.

Blunt, speaking at an afternoon news conference in Springfield, Missouri, said the Capitol insurrection on Jan. 6 was not a factor in his decision. He also said he was confident he would have won a third Senate term.

“In just 10 years in this body, he’s quickly become a true leader, a policy heavyweight, and a driving force behind both key conservative victories and essential bipartisan work,” McConnell said in a statement.

“A consummate legislator, Roy has worked tirelessly for the state he loves and has served Missourians with distinction,” Hawley said in a statement.

Blunt is the No. 4 in Senate Republican leadership. The five Senate Republicans not seeking reelection could set up contested primaries highlighting divisions between far-right, Trump-aligned Republicans and the old guard of the party. The others are Pat Toomey of Pennsylvania, Rob Portman of Ohio, Richard Shelby of Alabama and Richard Burr of North Carolina.

Two other Republicans — Sens. Charles Grassley of Iowa and Ron Johnson of Wisconsin — have not yet said whether they plan to seek reelection.

In Ohio, Pennsylvania and North Carolina, in particular, Democrats have hopes of winning seats. Of the remaining three, Missouri and Ohio have both trended Republican in recent years, and Alabama should be safe for the GOP.

It’s not clear whether Trump-induced Republican turmoil is playing a major role in Senate retirements so far. Blunt said he had a “good” relationship with Trump. While he has generally supported Trump, Blunt has broken with him occasionally.

Like most Republican senators, he voted against Trump’s effort to upend his November election loss. He also opposed Trump’s veto of last year’s sweeping defense policy bill, and backed a failed effort to prevent Trump from unilaterally shifting money to border wall construction.

Of the five announced retirees so far, four are age 65 or older and all have been in Congress for a decade or more. Ohio’s Portman said he had wearied of the intense polarization of today’s politics, but none of the others publicly suggested the political atmosphere contributed to their decisions.

“I think the country in the last decade or so has sort of fallen off the edge of too many politicians saying, ‘If you vote for me I’ll never compromise on anything,’” Blunt said. “That’s a philosophy that particularly does not work in a democracy. We see too much of it in our politics today at all levels.”

Based on history, Republicans have reason for optimism for regaining control of the 50-50 Senate. The party that does not hold the White House generally gains seats in mid-term congressional elections. However, Republicans will be defending 20 seats and Democrats just 14 in next year’s election.

As usual in Senate elections, most seats at stake in 2022 are from states that one party or the other dominates. Only roughly half a dozen seats held by each party appear potentially competitive, though that can change based on who the candidates are and the unpredictability of what issues predominate next year.

Democratic aspirations are muted in Missouri. After former Democratic U.S. Sen. Claire McCaskill lost her seat to Hawley in 2018, there’s only one statewide elected Democrat remaining in office: Auditor Nicole Galloway. McCaskill has already opted out of running again.

Kansas City Mayor Quinton Lucas, a Democrat, said he will “consider over the next several weeks” whether to run for the Senate but for now is focused on leading the city through the COVID-19 pandemic and the economic recovery.

On the other side of the aisle, a deep bench of Republicans serving in statewide seats could make a bid to replace Blunt, including Secretary of State Jay Ashcroft, Treasurer Scott Fitzpatrick and Attorney General Eric Schmitt. All three are in their thirties or forties.

“It looks like a seat that Republicans can have for the asking,” Smith said. “My guess is there will be few moderates running for the seat because winning a primary in Missouri means you need to be quite conservative.”

Other possible Republican candidates include former Gov. Eric Greitens, who resigned amid fallout from a sex scandal and ethics investigations in 2018.

“Many Republicans are going to take a serious look at this race,” longtime Missouri GOP political operative John Hancock said. “It’s an extremely important seat in the U.S. Senate. Control of the U.S. Senate is on the ballot in 2022."

After a failed gubernatorial bid in 1992, Blunt was elected to the House in 1996 and reelected six times, winning by wide majorities each time. He was House majority whip from 2003 to 2007.

After incumbent Republican Sen. Kit Bond announced his retirement in 2009, Blunt ran for the vacated seat and defeated Democrat Robin Carnahan by a 54% to 41% vote in 2010. He narrowly won reelection in 2016, defeating Democrat Jason Kander by less than 3 percentage points. Kander indicated he wasn’t interested in trying again.

“Senate Republicans have a retirement problem,” Christie Roberts, executive director of the Democratic Senatorial Campaign Committee, said in a statement. “Fresh off of opposing urgently needed relief for Americans impacted by the pandemic and economic crisis, they’re facing a growing list of defensive liabilities that shows even Republican incumbents don’t like their chances in 2022.”