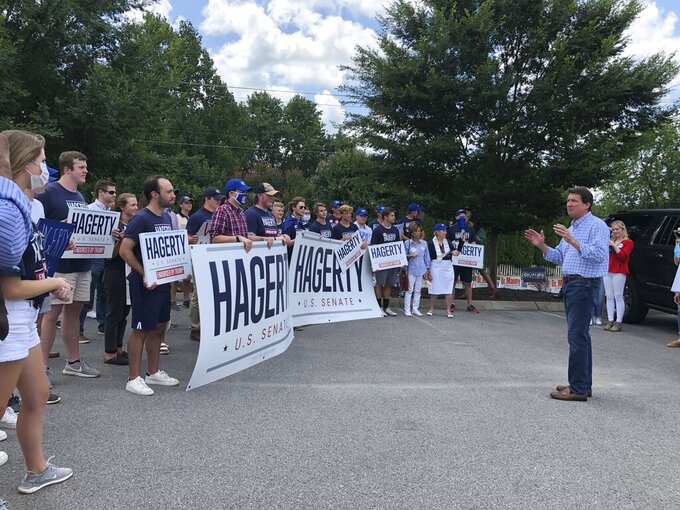 The heated race has become increasingly more tense ever since early voting opened last week in Tennessee. There's been a notable spike in attack ads and doling out high-profile endorsements for a seat being vacated by Republican Sen. Lamar Alexander, who previously announced he would retire at the end of his term.

“Politicians all claim to be fighters. They’re all going to fight and stand up for you, but what really matters is who fought when there was a battle to get fought,” Cotton, a Republican from Arkansas, told reporters. “And Bill Hagerty fought in 2016 for Donald Trump when a lot of Republicans were heading for the hills or hiding out.”

Hagerty — a former U.S. ambassador to Japan who supported moderate Republican Jeb Bush before throwing support behind Trump — has maintained that Sethi wasn’t a good enough advocate for the president during the 2016 election. Hagerty has attracted the support of not only Trump, but also Tennessee U.S. Sen. Marsha Blackburn, who won her seat in 2018.

“I had (Trump's) back then and I’ll have his back now and it couldn’t be more important than ever right now to get our conservative values to Washington, to stand up to the radical propositions that are coming from the Democratic Party,” Hagerty told reporters on Friday.

Sethi has countered Hagerty's attacks by describing himself as a conservative “outsider” and has criticized Hagerty as a part of the “Washington establishment.”

“The Washington swamp? They tell you who they're afraid of. You look at all the money pouring into Tennessee, just coming after him hard and that's a real indication that they don't want someone to rock the boat,” said Cruz, a Republican from Texas.

As the race has intensified over the past few weeks, Hagerty has continued to heavily campaign on Trump's endorsement of his Senate bid. Meanwhile, Sethi has maintained his support for Trump — who has notably not criticized or campaigned against the trauma surgeon.

“They are going to throw so much at us in the next two weeks in these attack ads and these lies and we've got to stand firm,” Sethi said.

“This is Manny vs. the machine,” he added.

Yet both candidates deemed their indoor events as safe, arguing that it was an individual choice to wear a mask — which were offered to participants.

For Democrats, Nashville attorney and former Army helicopter pilot James Mackler, 46, is the leading hopeful for the seat. If he wins the primary, it’s expected to be a challenge, considering Republicans have held both of Tennessee’s Senate seats since 1994.