GOP state senator at Capitol during attack urged to resign 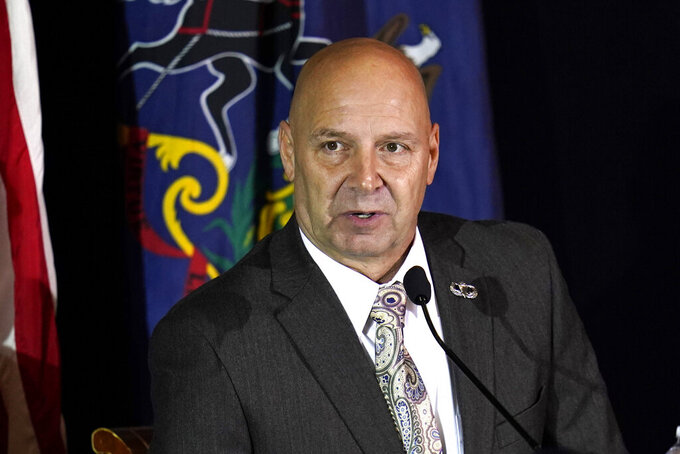 FILE - In this Wednesday, Nov. 25, 2020 file photo, Pennsylvania state Sen. Doug Mastriano, R-Franklin, attends a hearing of the Pennsylvania State Senate Majority Policy Committee in Gettysburg, Pa. Several lawmakers from across the country who traveled to Washington, D.C., for demonstrations rooted in the baseless conspiracy theory that Democrat Joe Biden stole the presidential election. Pennsylvania state Sen. Doug Mastriano said he helped organize a bus ride to the demonstrations but left the U.S. Capitol area after the eruption of violence, which he called “unacceptable.” A Democratic colleague called for his resignation nonetheless. (AP Photo/Julio Cortez, File)

HARRISBURG, Pa. (AP) — A Republican state senator who was on the scene when a violent mob of fellow Donald Trump supporters commandeered the U.S. Capitol should resign, the top Democrat in the Pennsylvania Senate said Thursday.

Minority Leader Jay Costa, D-Allegheny, said Sen. Doug Mastriano's words and actions since November encouraged a coup attempt and inspired the people behind it. At least eight other Senate Democrats have said Mastriano should step down.

“He has questioned the integrity of our elections without evidence, wasted taxpayer resources with sham hearings that claimed fraud without proof, and yesterday he was intimately engaged in the protest at the nation’s capital,” Costa said.

Mastriano, from Franklin County, has not returned multiple messages in the past two days, but said in a statement late Wednesday that he did not enter the Capitol or go beyond police lines, and “when it was apparent that this was no longer a peaceful protest, my wife and I left the area.”

In a video message, he said he did not support the violence, decried the mob's attack on police and described how he and his wife had to drive through Washington traffic to get home.

One of those calling for his resignation, Sen. Vincent Hughes, D-Philadelphia, said Trump and Mastriano “proudly fanned the flames of insurrection. Yesterday, Mastriano traveled to Washington D.C. to see the fruits of his efforts and admire his work.”

"He assured me that he did not participate in any unlawful activities," Corman said.

Those assurances did not satisfy 16 Democratic state senators, who wrote to Costa and the two top Republican leaders late Thursday to ask for an investigative committee, with equal numbers from both parties, to examine whether Mastriano broke state or federal law related to the Capitol attack.

“If it is shown that a sitting member, who was indisputably at the scene, was involved in these illegal events, it would be reprehensible and constitute conduct unbecoming a State Senator, at best,” the letter said.

Mastriano organized busloads of people to go to Washington on Wednesday, but he apparently did not ride in one of those buses himself.

Mastriano has boasted repeatedly in recent months that he has had regular, direct conversations with Trump about the president's attempts to overturn his loss to Joe Biden in the presidential election.

Mastriano organized a November hearing in Gettysburg on specious election fraud claims, a meeting that Trump spoke to by phone. Later that day, Mastriano and fellow supporters went to the White House, but Mastriano tested positive for COVID-19 and was not allowed to meet with Trump.

He has also led a series of rallies at the Capitol this year to oppose mask wearing, social distancing and the state's infection mitigation strategies. He has encouraged supporters who want to see him run for governor in 2022.

Before the attack on Wednesday, Mastriano put his Washington itinerary on Facebook, including a speaking slot on the Capitol steps scheduled for 1 to 3 p.m. — the time when the building was being besieged.