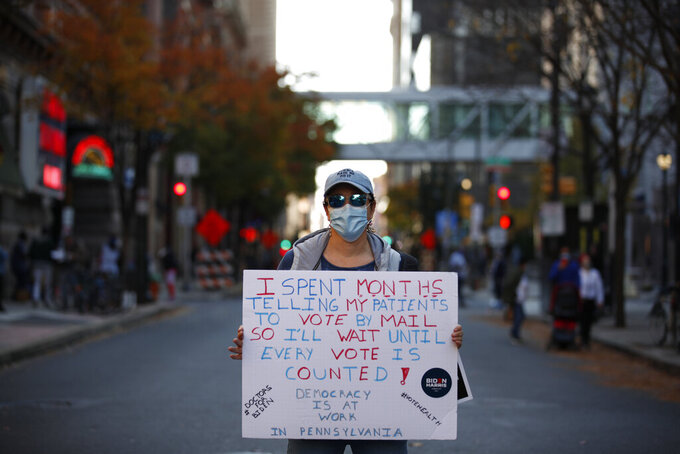 HARRISBURG, Pa. (AP) — Counting of Pennsylvania ballots continued Thursday, with results still unclear for the presidential contest as well as a host of downballot races, including for some congressional seats and three statewide offices.

Election officials are tabulating ballots in a state that held its first general election in which voters did not need an excuse to vote by mail. More than 3 million applied to do so.

President Donald Trump and former Vice President Joe Biden are hotly contesting Pennsylvania's 20 electoral votes, with both campaigns seeing a victory in the state as crucial to their chances of winning the White House.

While county officials tally votes from what is shaping up as massive turnout, the Trump campaign, state election officials, Republican candidates and others have gone to court in recent weeks to settle fights over aspects of state election law, particularly its year-old law that greatly expanded mail-in voting.

Despite a flurry of legal action by Trump and the Republican Party over aspects of the count, counties across Pennsylvania headed toward the finish line Thursday of a massive tabulating effort that included millions of mail-in ballots.

Second-term Republican U.S. Rep. Brian Fitzpatrick in Bucks County, just north of Philadelphia, won reelection after being a top target again for Democrats as one of just three House Republicans in the country running for reelection in a district won by Democrat Hillary Clinton in 2016′s presidential contest.

Fitzpatrick voted for Trump’s tax cut and opposed his impeachment. Finello attacked Fitzpatrick as too weak to stand up to Trump and silent in the face of the president's worst transgressions.

Freshman Democrat U.S. Rep. Susan Wild is defending her Allentown-area seat against Republican nominee Lisa Scheller, a former Lehigh County commissioner who started a pigment manufacturer for paints, coatings and inks and touts her background as someone recovered from addiction who advocates for people in recovery.

Wild, a prominent lawyer in Allentown, scored a 10-percentage-point thumping of her Republican opponent in 2018′s campaign for what was an open seat.

Wild declared victory Thursday evening, though The Associated Press had yet to call the race.

The district is daunting for a Republican. Democrats have a 60,000-voter registration advantage, but Scheller's fundraising picked up and closed a big campaign cash advantage that Wild had held going into July.

Four-term Democratic U.S. Rep. Matt Cartwright in northeastern Pennsylvania is in his third go-round of seeking reelection in a district where Trump is popular.

This time Cartwright was challenged by Jim Bognet, a first-time candidate who won a six-person GOP primary, in part, by promising to be a staunch Trump ally.

Perry, a staunch Trump supporter and owner of one of the most conservative voting records in the U.S. House, hung on for another term in a district that is becoming less conservative.

U.S. Rep. Conor Lamb sought a second full term after becoming a Democratic star in 2018 for winning two races in two Trump districts — a special election in a district Trump won by 20 percentage points and a general election in a redrawn district against a three-term incumbent.

Lamb faced a challenge from Republican Sean Parnell, a decorated Army vet who is a regular guest on Fox News programs — he announced his candidacy during an appearance on “Fox & Friends” — and is known for his memoir on the war in Afghanistan and authoring two action novels.

Parnell is also a Trump darling. He got a speaking slot at the Republican National Convention and campaign stump shoutouts from Trump, with southwestern Pennsylvania a regular destination for Trump.

Heather Heidelbaugh, a lawyer from Mount Lebanon and a former Allegheny County Council member, won the Republican nomination to take on Democratic Attorney General Josh Shapiro after running unopposed in the primary.

Heidelbaugh has described Shapiro as lacking experience as a courtroom lawyer and having chased headlines to feed political ambition. She cites his recent and repeated publicizing of coronavirus-related price gouging cases.

On what Heidelbaugh calls her top priority, criminal prosecutions, she hopes to start her term by convening a meeting of county district attorneys to help determine the best direction in the fight against opioids and methamphetamine.

Shapiro, a resident of Abington, is a former state lawmaker and Montgomery County commissioner who sought a second term.

He took over following the debacle that was Democrat Kathleen Kane’s term in office. Kane resigned in the fourth year of her term after being convicted of fraud and later served jail time.

Joe Torsella, considered a potential gubernatorial or U.S. Senate candidate, said his major accomplishments as state treasurer include setting up a scholarship program that begins for children at birth and leading a lawsuit against large Wall Street banks over their bond fees.

The Republican challenger was Stacy Garrity, 56, who retired as a colonel in 2016 after 30 years with the Army Reserves. She is vice president of a tungsten smelting plant.

Garrity, who lives in Athens in Bradford County, wants to use the Treasury Department’s leverage to push lawmakers and the governor to limit spending to money that has been formally appropriated by the Legislature and end the executive branch's spending of money outside the pre-approval process.

DeFoor is Black and Ahmad was born in Bangladesh, so in January the state’s first elected “row officer” of color will begin work.

Ahmad, 61, who has a doctorate in chemistry, has said she wants to expand the office’s traditional watchdog role so that it also examines how equitably public money gets distributed. She wants to focus on charter schools and do what she can to expand high-speed internet.

DeFoor, 58, the elected controller in Dauphin County, which includes Harrisburg, touts his experience as making him uniquely qualified for the office. He has spent three decades conducting governmental audits and fraud investigations for the state inspector general, the state attorney general and a large hospital system.

The Green Party candidate for auditor general is Olivia Faison, and the Libertarian is Jennifer Lynn Moore.

All 203 state House seats and half the 50-person Senate were before the voters, with Republican majority control in both chambers at stake.

Democrats went into the election needing a net pickup of nine seats to regain the state House majority, which they have not had in a decade. Two years ago, Democrats gained 11 seats to get to 93 members, versus 110 Republicans.

The Senate is closer, with Democrats needing four seats for a tie that would give them effective majority control. That gap widened with Iovino's loss.