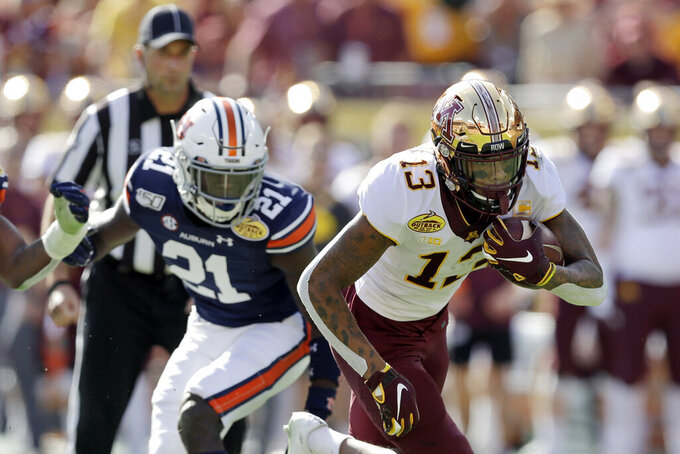 FILE - In this Jan. 1, 2020, file photo, Minnesota wide receiver Rashod Bateman (13) turns upfield against Auburn during the first half of the Outback Bowl NCAA college football gam in Tampa, Fla. Bateman has opted out of the 2020 season amid concerns about the coronavirus, forgoing his remaining two years of eligibility to enter the 2021 NFL draft. (AP Photo/Chris O'Meara, File)

MINNEAPOLIS (AP) — Minnesota star wide receiver Rashod Bateman will pass on a 2020 college football season that has been complicated — and threatened — by the pandemic.

Bateman announced Tuesday he has opted out amid concerns about the coronavirus and will forgo his remaining two years of eligibility to enter the 2021 NFL draft. He is widely projected to be a first-round pick. He posted a professionally created video on his Twitter account that he narrated in explanation of his decision, which the university confirmed.

“I’m now making the hardest decision that I’ve ever had to make in my life,” Bateman said. “Minnesota, you have my heart forever. Moving from a small town to a big city, I was very nervous. You all have accepted me with open arms and have helped me find myself.”

Bateman is the first prominent player in the Big Ten Conference to declare he's skipping the 2020 season. Virginia Tech standout cornerback Caleb Farley recently announced he will not play for the Hokies if there is a season.

“I believe more potential high draft picks will opt out,” NFL agent Don Yee, who counts quarterback Tom Brady among his clients, said last week. “These are real-world business issues they are confronting, no different than a college head coach being presented a lucrative alternative.”

Ohio State quarterback Justin Fields, a potential high first-round draft pick entering his junior season, said he had no plans to opt out.

“I see where other guys are coming from, but I haven’t necessarily thought about it yet,” Fields said. “I love to play football. Growing up in my family, I never really needed anything. My family provided everything I’ve needed. So getting to the money as fast as I can is not really a priority to me."

Buckeyes defensive back Shaun Wade, who could have entered the draft after last season but decided to return to Ohio State, also said he has not considered opting out.

Bateman, a native of Tifton, Georgia, totaled 111 receptions, 1,923 yards and 17 touchdowns over his two years with the Gophers, tying for 12th, eighth and fifth, respectively, in those categories on the program’s career list. Bateman was a third team All-American and the Big Ten Receiver of the Year award winner in 2019 with 60 catches for 1,219 yards and 11 scores. His yardage total was the second most in a single season in Gophers history.

“He was a joy to coach and has developed into an NFL caliber of player. We could not be more proud of Rashod’s historic and All-American career at Minnesota,” coach P.J. Fleck said in a statement he posted on Twitter. “We will certainly miss him. Our program will always support a teammate who makes a decision that he feels is best for him and his family.”

The Gophers previously had the other half of their star wide receiver duo from last season depart, with Tyler Johnson’s graduation. Johnson was drafted in the fifth round by the Tampa Bay Buccaneers, where he'll get to catch passes from Brady. Bateman and Johnson were a major reason why the Gophers went 11-2 and were ranked 10th in the final Associated Press poll.

At one point during the video, Bateman turned his attention to Fleck.

“I would do anything to be able to play football for you again alongside my teammates and bring back a Big Ten championship to the Twin Cities. I’ll be right there cheering along this program, whenever Minnesota football resumes,” Bateman said. “Unfortunately, in light of the uncertainty around health and safety in the midst of the COVID-19 pandemic, I have to set my wishes aside for the wellness of my family, community and beyond.”

Fleck and his staff discovered the late-blooming Bateman in a satellite camp for recruits in Atlanta before his senior year of high school. The Gophers were the first power conference program to offer him a scholarship, and he kept his commitment to them even after his exceptional final prep season led SEC schools Georgia, Mississippi, Tennessee, Texas A&M and South Carolina to extend offers. He not only turned them down but got a tattoo on his arm of Minnesota's block “M” logo and “R.T.B.” for Fleck's trademarked “Row The Boat” mantra about teamwork and aspiration.

Bateman made such a significant impact in his short time on campus that even athletic director Mark Coyle issued a statement about his departure.