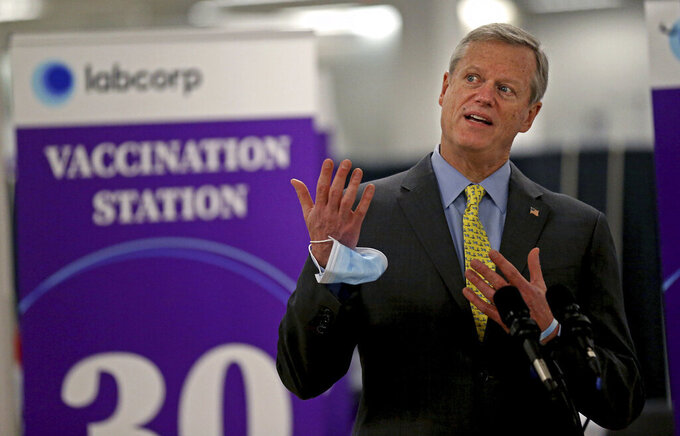 BOSTON (AP) — Massachusetts lawmakers grilled Gov. Charlie Baker during a virtual oversight hearing Thursday, pressing him on the state’s rocky COVID-19 vaccine rollout plan that has frustrated many residents trying to book an appointment for a shot.

Baker pointed to a limited number of vaccines made available to the state each week by the federal government as the primary source of that frustration, with demand for shots far outpacing supply.

But lawmakers said the state’s handling of the distribution of the vaccine supply it has obtained — including a glitchy state vaccine website that crashed just as shots were being made available to those 65 or older and those with certain medical conditions — has added to the woes.

Even the Republican governor has described the early rollout as “lumpy and bumpy.”

Democratic lawmakers said that was too mild a description.

“It has not been lumpy and bumpy. It has been a failure,” said Democratic state Sen. Eric Lesser. “All of our constituents are justifiably outraged and are asking why the governor of Massachusetts — in the health care and technology capital of the country — cannot figure out how to operate a website.”

Baker said he anticipated back in December that the vaccine rollout process — with the ultimate goal of delivering two shots to millions of residents — would be challenging.

“That happens when people are doing something that’s never been done before,” Baker said. “The process hasn’t been perfect. In fact for many it’s been enormously difficult.”

“Not having a website properly prepared for the first day of eligibility for those 65 and older and those with two comorbidities was a nightmare for many for which there is no excuse,” he added, saying the state is continuing to work to improve the site.

State Sen. Cindy Friedman said she understands the difficult decisions Baker has faced throughout the pandemic, but said she has been baffled by the technical troubles.

“The twists and turns, the change in plans, the communication that changes depending on who you are talking to and from day to day” has muddied the ability of many to navigate the process of signing up for a shot, the Democrat said.

“The fact that I still can’t tell my constituents honestly and with confidence where and how many of them will get a vaccine speaks to an utter breakdown of planning and communication,” she added. “So many people feel anxious, jerked around and completely unsure as how to navigate the system and that’s just not OK.”

“What happened to the website is on us,” he said.

But Baker also defended his administration’s larger strategy of rolling out the vaccine in stages that he said prioritized the most vulnerable at first including those in assisted living, medical workers, first responders, those in more crowded congregate living situations and those over 75.

That process may have slowed the vaccine rollout in the initial stages but ensured that those most likely to become ill or die from the virus were placed at the front of the line. About 60% of COVID-19 deaths in Massachusetts have occurred at long term care facilities.