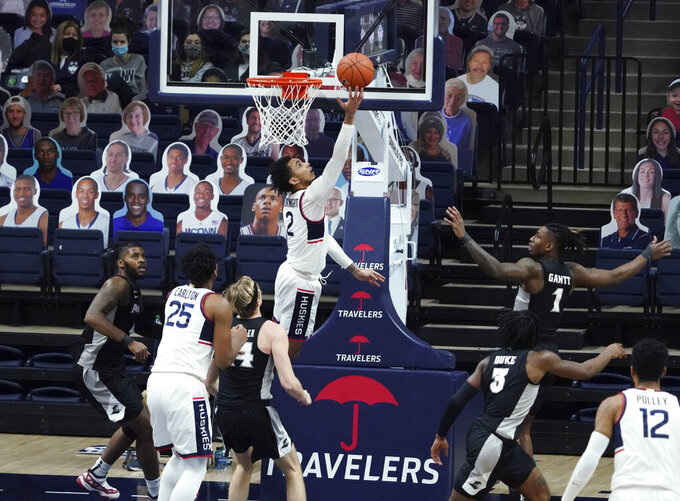 Connecticut guard James Bouknight (2) makes a basket against Providence during the second half of an NCAA college basketball game Tuesday, Feb. 16, 2021, in Storrs, Conn. (David Butler II/Pool Photo via AP)

Gov. Ned Lamont announced Thursday he plans to lift some restrictions on youth sports in Connecticut as the state's COVID-19 metrics continue to improve.

The Democrat said athletes will be allowed to compete in previously banned indoor sports, including cheerleading and competitive dance. Lamont said he expects to ease restrictions soon on some outdoor sports considered high-risk for infection, such as lacrosse.

The governor said the number of fans allowed at youth sporting events will also be increased. The state will institute a cap at 25% capacity and 200 fans, whichever is the lower number.

“Look, I used to love watching my kids play hockey and basketball and I know that has been limited over the last few months, so I think we’re going to lift that cap to some degree, still erring on the side of caution,” he said.

Lamont said he also plans to open the state's borders on March 1 to allow interstate athletic competitions and tournaments. Colleges, meanwhile, can make their own decisions on allowing fans into venues in consultation with the state Department of Public Health, he said.

The University of Connecticut said it has no immediate plans to change its attendance policy.

“We will continue to follow the guidance provided to us by the Department of Public Health and the Department of Economic and Community Development, which recommends in-person attendance to a maximum of four friends or family members per student-athlete and coach,” spokesman Pat McKenna said in an email. “Any decision to adjust this policy would be made in consultation with DPH and DECD.”

Lamont said he expects to release a list on Monday of specific medical conditions that residents must have in order to be considered for the next round of COVID-19 vaccinations, when people with comorbidities will start becoming eligible for a shot.

The governor said his administration is still reviewing recommendations from the U.S. Centers for Disease Control and Prevention, which has posted two lists of medical conditions on its website. One includes ailments and conditions that put adults at any ages at increased risk of severe illness, including cancer, chronic kidney disease, Type 2 diabetes and pregnancy. The second list includes conditions that might put people at an increased risk, such as asthma, cystic fibrosis and hypertension.

“Just give us a few more days to take a look at that. I know how anxious people are. I know CDC is sort of feeling their way on this as well. Obviously, those at the most acute risk should be prioritized,” he said. “We’re going to be working with the hospitals and the doctors and those that have a primary care physician to make sure they can reach out to people that are in that condition.”

“We’re going to have to work hard to make sure the rest of that cohort gets vaccinated,” he said, adding how approximately 14% of the overall state population has received at least one dose so far.

Appearing on Lamont’s briefing with reporters, Slavitt said the administration will regularly notify the state how much vaccine it will receive over a three-week period so state officials have an amount they can count on. He said the number of doses “will only increase” and “never go down” as production ramps up.

Meanwhile, Josh Geballe, Lamont’s chief operating officer, said Connecticut has received most of the doses it had expected for this week — about 90,000 of the roughly 100,000 first and second doses — despite the storms and outages that have hit a big swath of the U.S. over the past several days.

While the distributer of the Moderna vaccine has had significant challenges because of the bad weather in Kentucky, Geballe said the impact on Connecticut has been limited.

“We got most of our doses on the ground and we’re working with our providers where necessary to move vaccine around the state,” he said.

Yet Geballe acknowledged next week’s shipments from Moderna and Pfizer could be impacted by the severe weather. He said the administration closely watching the situation, but so far there have been been no indications of delays.

Meanwhile, officials are optimistic a federally run vaccination clinic could open soon. Geballe said federal officials were in Bridgeport on Wednesday to look at the site being recommended by the state. Also, Geballe said Connecticut has submitted applications with FEMA for smaller, mobile clinics that could vaccinate people in congregate settings and elsewhere. The vaccine supply for those new clinics, as well as additional doses anticipated for federally qualified health centers, will be in addition to the state’s regular allotment, he said.

A large-scale vaccination site will be opening at Mohegan Sun's Earth Expo and Convention Center on Friday. Operated by Yale New Haven Health System, the appointment-only location is expected to serve up to 300 Connecticut residents, with the ability to vaccinate more as the state's supply increases.