Gov. Whitmer reflects on a divided year for Michigan 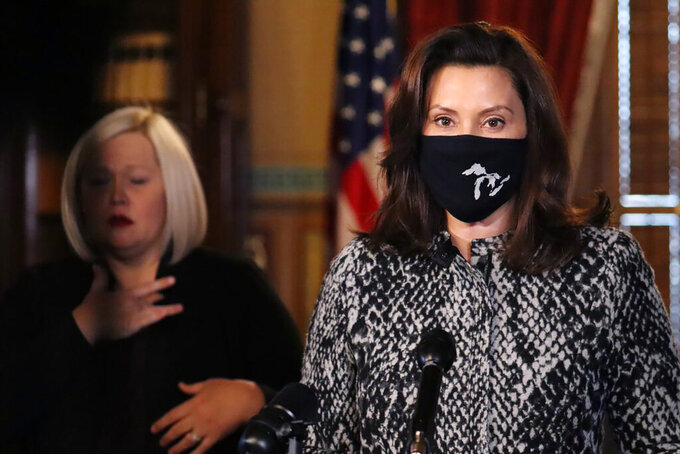 In a photo provided by the Michigan Office of the Governor, Gov. Gretchen Whitmer addresses the state during a speech in Lansing, Mich., Friday, Dec. 18, 2020. Whitmer's administration on Friday lifted a prohibition on in-person instruction at Michigan high schools and said movie theaters and other entertainment venues can reopen with capacity restrictions following a decline in coronavirus cases. Universities and colleges can let students return to campus next month, with a request to wait until Jan. 18 to restart face-to-face classes. (Michigan Office of the Governor via AP)

LANSING, Mich (AP) — Gov. Gretchen Whitmer said Tuesday that “politics has permeated” the coronavirus fight and made it harder to protect the public.

Whitmer spoke to reporters during a year-end video conference, reflecting on the state's response to COVID-19, efforts to reduce racial disparities in health care as well as an alleged plot to kidnap her.

“I think in any time, a governor, their first and foremost job is to keep the people of their state safe, and we’ve done well on that count, considering all of the challenges that we’ve had,” Whitmer said.

“National experts are pointing to what we’re doing in Michigan, other states are following our lead because we’re following the science and we’re being strategic about how we address the spread that’s happening," she said.

Michigan has struggled to keep COVID-19 numbers down, ranking high during much of the pandemic in infection cases and deaths, which now exceed 11,700. But the governor said statewide restrictions have allowed Michigan to start reducing the spread, especially avoiding a post-Thanksgiving surge.

Whitmer issued nearly 200 executive orders, which were criticized by Republicans for harming the state’s economy and infringing on freedom. The Michigan Supreme Court in October said the governor was using an unconstitutional law as the foundation for her orders. She pivoted by using the health department to make similar orders that suspended indoor dining and in-person high school classes, among many other restrictions.

A global pandemic, national outcry against police brutality and a contentious election year have created chasms in the state, said Whitmer, a Democrat.

“Sadly, politics has permeated this public health crisis at every turn,” she said. “It’s really undermined our ability to save lives. That’s nationally, when you see what’s happened in the United States versus other countries. ... We should be leading the world in our COVID response and we are lagging.”

President Donald Trump throughout the pandemic has publicly insulted Whitmer, calling her a dictator. In October, six people were charged in federal court in an alleged plot to kidnap her due to outrage over her COVID-19 policies. Eight people have been charged in state court with assisting them.

“My life and my family’s lives were threatened frequently, in a very serious manner that got international headlines, and I’ve asked our leaders on the other side of the aisle to help bring the heat down, and they didn’t so I’m going to continue to stay focused on my job and do everything that I can to get our state through this tough time," Whitmer said.

“We got a lot of work to do. The work that we did in Michigan really made us a national leader when it came to recognizing the disparity in impact that COVID has had on communities of color, in the black community in particular," Whitmer said.