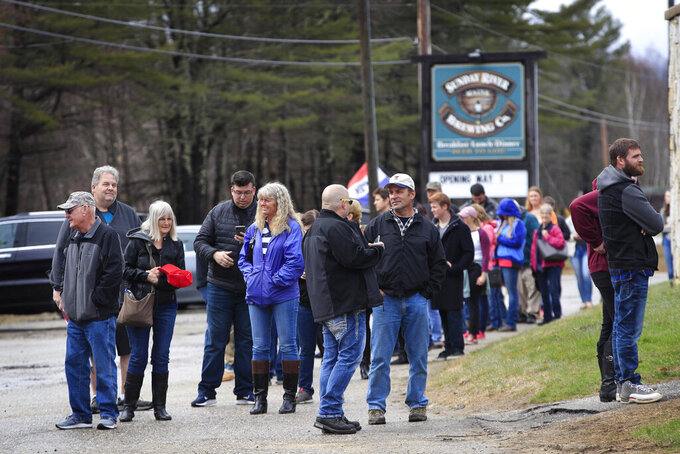 A crowd waits to get into Sunday River Brewing Company, Friday, May 1, 2020, in Newry, Maine. Rick Savage, owner of the brew pub, defied an executive order that prohibited the gathering of 10 or more people and opened his establishment during the coronavirus pandemic. (AP Photo/Robert F. Bukaty)

PORTLAND, Maine (AP) — Gov. Janet Mills acknowledged the pace of restarting the economy was testing people's patience Friday as an angry restaurant owner openly defied her executive orders by reopening his restaurant for the day.

Mills assured people that she's listening to their concerns but warned that there won't be unanimous agreement on everything as she grapples with the safest path forward during a pandemic.

"There will also be a lot of frustration. I understand that. Yes, and there is anger, and I share that. But let’s keep talking," the Democrat said.

The first phase of reopening the state began Friday with restrictions lifted on the use of golf courses, visits to the dentist, barbers and hairdressers, and stay-in-your-vehicle religious services. Mainers also were required to begin wearing masks when social distancing isn't possible.

But a restaurateur in Bethel, in western Maine, used the megaphone of an appearance on Fox News Channel to criticize the governor, claiming she was going “rogue” and wasn't listening to business owners. He openly shared what he said was the governor's cellphone number live on TV.

"We’ve had enough of it. We’re encouraging all businesses in Maine to open up. We never should’ve been closed in the first place,” Rick Savage said on primetime host Tucker Carlson’s show Thursday evening.

More than 100 people — virtually none of them wearing masks — gathered early Friday evening for the opportunity to dine inside Savage's Sunday River Brewing Co. Dine-in service isn’t allowed in Maine until June 1.

He initially said he was undeterred after the state revoked his food and liquor licenses. But he announced Friday evening via Facebook that the restaurant will close for the weekend so he can consult with an attorney.

Oxford County Sheriff Christopher Wainwright didn't seem to be interested in intervening in the situation. He said his primary focus is on providing emergency services, not administrative enforcement actions.

Delivering an address in Augusta, Mills didn't mention the restaurant owner but said that with every decision she has “thought long and hard about how Maine people — and Maine businesses — will be impacted. ”

She said she the state's plan for reopening the economy is flexible but she said the state has to move cautiously to balance the interests of struggling businesses and healthcare workers before the summer influx of vacationers from places like Massachusetts and New York, where thousands have died.

"I will do everything in my power to make sure that this deadly and untreatable virus does not hop a plane, a bus, a truck or a train, an SUV or an RV — and land here and take over our state," she said.

The reopening Friday continued a prohibition on gatherings of more than 10 people and the quarantine of all people entering or returning to Maine for 14 days. In addition to restaurants, the second phase, effective June 1, would allow the reopening of retail stores for broader in-store shopping, hotel lodging for state residents, and fitness and exercise centers. Hotels would open out-of-state guests on July 1 under the governor’s plan.

In Bethel, Savage became an instant hero for business leaders advocating a faster pace of reopening the economy.

Town Manager Loretta Powers said she sympathizes with business owners like Savage who are frustrated by the pace of reopening.

“I totally see where he’s coming from because I feel bad for these restaurants. Tourism is our income here. That’s what keeps us going around,” Powers said.

In other news related to the virus:

Maine recorded 28 new cases and two more deaths on Friday. The state has had more than 1,100 cases and 55 deaths. The coronavirus causes mild or moderate symptoms for most people. For some, especially older adults and people with existing health problems, it can cause more severe illness or death.

Maine Senate Republicans said in a statement on Friday that Mills isn't collaborating with members of the Maine Legislature, and members feel left in the dark about the state's response to the virus. The Republicans said Mills is “acting as if the governor is the sole source of authority in state government.”

Mills’s office said the administration is in regular contact with Republicans in the legislature and has agreed to have the Maine Department of Labor appear before the legislature’s Labor Committee next week, per their request.

“But let’s be honest, this is not about the facts for them – this is about politics. And the Governor doesn’t have time for politics. She is laser-focused on keeping Maine people healthy and restarting our economy,” said Lindsay Crete, a spokesperson for Mills.