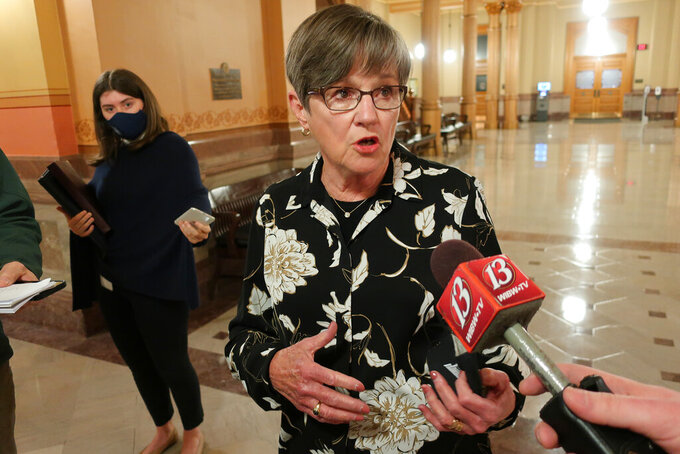 In this photo from Friday, April 16, 2021, Kansas Gov. Laura Kelly answers questions from reporters following an event at the Statehouse in Topeka, Kan. Kelly has announced that state government agencies will resume normal operations starting the week of June 13, 2021, after months of having many employees work remotely because of the coronavirus pandemic. (AP Photo/John Hanna)

TOPEKA, Kan. (AP) — Kansas state government offices will return to normal operations in mid-June after more than a year of having many employees work remotely because of the coronavirus pandemic, Gov. Laura Kelly announced Wednesday.

But Kelly said state employees and visitors to their offices still will be required to wear masks and to maintain social distancing. She also said agency directors can allow people to work from home, particularly when social distancing is not possible, provided “there is no disruption to agency operations.” The changes take effect the week of June 13, which means Monday, June 14 for most workers.

The governor directed most state employees to work remotely last spring. Her administration did not have a number or percentage for how many of the 17,500 employees directly under her control still are not working in their offices at least one day a week.

DeAngela Burns-Wallace, head of the state Department of Administration, said in a memo to other agency heads and human resources directors: “We should start from the stance of having state employees working in our offices still is a preferred norm."

She said in her memo that the state could move ahead because of widespread availability of rapid and accurate coronavirus testing and the ability of all state workers to get vaccinated by the end of this month.

The Kansas Organization of State Employees called the reopening policy flexible and cited its safety precautions in backing Kelly's move along with an affiliated union, the American Federation of Teachers-Kansas.

“The plan allows for agencies to determine their own remote work policies and accommodations and includes thoughtful workplace protections for health risks the virus poses to state workers and their families,” AFT-Kansas President Sarah LaFrenz said in a statement.

He said people, businesses and nonprofit groups deserve a state government “that is fully open.”

And Senate President Ty Masterson, an Andover Republican, said: “Most Kansans have been back to normal for weeks, if not months, and it seems unnecessary to continue to impose mask and distancing rules.”

In Missouri, Republican Gov. Mike Parson ordered all state employees to return to working in their offices Monday, without requirements for masks and social distancing. Only about a third of the state’s 33,000 employees still were working remotely.

In Kansas, Republican lawmakers have been critical of the Democratic governor for months over her handling of the pandemic. They've argued that restrictions she imposed early on were tougher than they needed to be and unnecessarily damaged the economy. Kelly has defended her actions as crucial when state officials feared that a big, early surge in COVID-19 cases would overwhelm hospitals and Kansas scrambled to find personal protective equipment and testing supplies.

Burns-Wallace's memo said notices of mask-wearing requirements will remain posted at entrances to state buildings and stations that check people's temperatures will remain in place.

The department said less than 1.16 million of the state's 2.9 million residents or 39.7% had received at least one vaccine shot.

The Stormont Vail health system in northeast Kansas, which has been running a mass vaccination clinic at Topeka's largest events center, said Wednesday that it will take appointments only for Fridays, starting next week. The health system also said it also was opening appointments to any Kansas resident 12 or older.