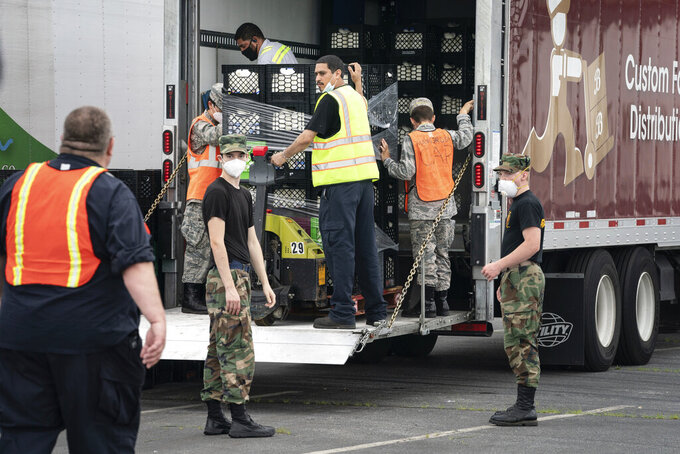 National Guard assists Philabundance at the first drive-thru distribution by the agency, in a parking lot next to the sports stadiums in Philadelphia, Friday, May 29, 2020. (Jessica Griffin/The Philadelphia Inquirer via AP)

HARRISBURG, Pa. (AP) — Gov. Tom Wolf will lift most of his pandemic restrictions in an additional 16 counties home to nearly 3 million people, including much of the Pittsburgh area, his office said Friday as afflicted Philadelphia also began mapping its way out of the crisis.

They will move next Friday to the so-called “green” phase, which has the fewest restrictions in the governor’s stoplight-colored three-phase reopening plan.

Meanwhile Friday, 26 more counties woke up to fewer restrictions, announced a week ago by the Democratic governor.

That leaves nearly 6 million people in hard-hit southeastern Pennsylvania under Wolf's tightest orders for one more week, including a stay-at-home order that is part of Wolf's “red” phase.

However, with some restrictions still in force in the green phase on businesses and gatherings, Wolf hasn't said what comes after that, or when.

Thus far, more than 70,000 Pennsylvanians have been infected with the coronavirus, according to state figures, and more than 5,400 have died from it.

Meanwhile, more than 2.3 million people in Pennsylvania, including self-employed and gig workers, have filed for unemployment since mid-March, when Wolf’s shutdown orders began taking effect.

Along with the stay-at-home order, more retailers and other businesses can reopen, including outdoor dine-in seating service at restaurants. Gatherings are limited to 25 people.

Also Friday, 18 mostly rural counties across northern Pennsylvania that are home to about 850,000 residents are moving to the green phase, the first counties to do so. That includes Centre County, the home of Penn State’s main campus.

In the green phase, overnight camps and organized youth sports can operate, while restaurants and bars, salons and barber shops, gyms, theaters, malls and casinos can open at half of capacity. Other businesses serving the public in a building or defined area can only operate at as much as 75% of capacity.

People will still be asked to wear masks in public, and businesses must enforce social distancing requirements, while concerts, sporting events and other large gatherings are restricted to under 250 people.

Wolf has said that next Friday he will move the remaining “red” counties — Philadelphia, Berks, Bucks, Chester, Delaware, Lackawanna, Lancaster, Lehigh, Montgomery and Northampton — to yellow.

Philadelphia officials said Friday they are carefully wading into restrictions, precautions and what needs to be monitored moving into the yellow phase.

Many of the business and other restrictions that will be eased mirror the state's, but Philadelphia officials cited a handful of differences.

The state's yellow phase allows for gatherings of fewer than 25 people, Philadelphia Health Commissioner Thomas Farley said, while the city is continuing to “strongly discourage” religious or social gatherings of any size.

Weeks of work at the state Department of Education could yield guidelines as early as next week for school districts in helping them decide how to reopen schools, Wolf said Friday.

Wolf's administration has said for weeks that its goal was to get students to go back to school in the fall, and the governor said school boards will still have “a lot to say” about how they will do that.

“We are going to be opening schools. Whether it's August or September, that depends on the local school district,” Wolf said. “No question."

Schools, he said, will look different, perhaps with more online learning, less classroom learning and fewer students in each classroom.

The guidelines, Wolf said, are designed to help school districts keep students, staff, teachers and parents safe from the virus. They will cover class size, bus systems and sports, as well as how to mix online learning with in-person learning, Wolf said.

Of utmost importance will be inspiring confidence that schools are safe, Wolf said.

“Ultimately what it comes down to is, 'Am I going to be confident sending my child or going to an event at school myself?'” Wolf said. “And if we can’t answer that question satisfactorily, we're going to have trouble.”

Schools have been closed since March under Wolf’s orders to try to stop the spread of the coronavirus, keeping more than 1.7 million public school children home. It also exposed big differences in the ability of wealthier and poorer districts to educate children online.

Wolf's education secretary, Pedro Rivera, has acknowledged that schools will need additional aid to respond to various challenges posed by school closures and the need to contain the virus.

Seventy-six residents of the 589-bed nursing home in Beaver County have died, the state Health Department has said.

It has installed a temporary manager at Brighton, sent the National Guard to assist with staffing and hired infectious disease-prevention consultants.

But Azar questioned whether Pennsylvania officials have been “aggressive enough” in flagging and enforcing violations at the center.

The Centers for Medicare and Medicaid Services sent investigators to the center earlier in May, he said.

“We are completing our own federal investigation of the conditions and circumstances there and will publicly release our findings soon,” Azar said.

If it is merited, he said, his agency will "certainly demand accountability.”

State health officials said 91 more Pennsylvanians have died from COVID-19, for a total of 5,464. Nursing homes and similar facilities account for 3,517 of the deaths.