Governor in state address: Texas on 'comeback' from pandemic 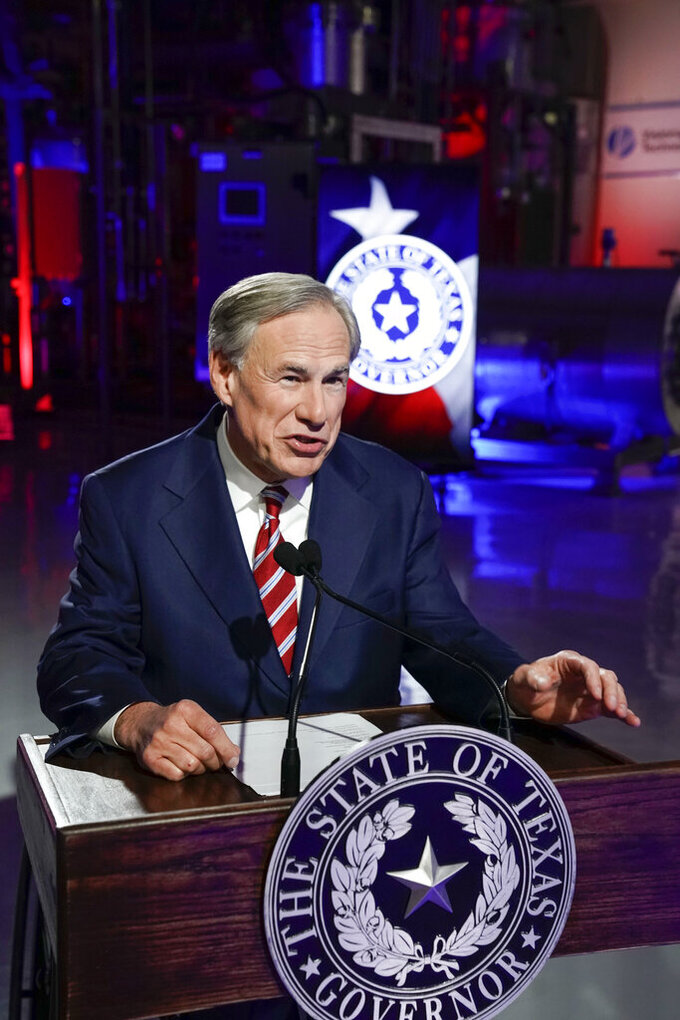 Texas Gov. Greg Abbott prepares to deliver his State of the State speech at Visionary Fiber Technologies, for the first time outside the Capitol, Monday, Feb. 1, 2021, in Lockhart, Texas. (Bob Daemmrich/Pool Photo via AP) 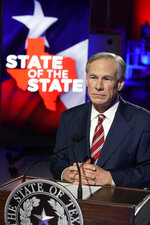 AUSTIN, Texas (AP) — Republican Gov. Greg Abbott said Texas is on a comeback from a pandemic that has killed more than 36,000 people here — third-most in the U.S. — and steered America's biggest red state Monday night into a thicket of battles over voting, policing and immigration that are likely to deepen political divides in the months ahead.

In his final State of the State address before he is on the ballot for a third term in 2022, Abbott called for outlawing the cutting of police budgets and ordered the GOP majority in the Texas Capitol to prioritize “election integrity," while making no mention that there was no evidence of widespread fraud during the 2020 elections.

He also demanded more gun protection on the books at a time when the NRA is newly looking to reincorporate in Texas, and more anti-abortion laws in a state that already has some of the most restrictive measures in the country.

Democrats used their rebuttal to narrowly tear into Abbott's handling of the pandemic and paint a bleaker picture than his upbeat assessments, saying an uneven response continues letting cases spread and leaves cities powerless to manage outbreaks.

Abbott, who has not ruled out a 2024 presidential run, delivered his State of the State for the on primetime television in Texas for the first time — rather than in front of lawmakers in the state Capitol, where COVID-19 worries continues to restrict gatherings.

But that gave Abbott an even larger audience than usual to defend his pandemic response — which has come under attack from members of his own party — at a moment when Texas, like most of the U.S., is finally seeing hospitalizations and cases fall after reaching record highs in recent weeks.

He praised frontline hospital workers for their resilience and declared expanding broadband access a priority in the aftermath of a pandemic that forced millions to work and go to school from home. There was no mention of direct relief for Texans put of work but a demand for legislation that would protect businesses from pandemic-related lawsuits.

He also called on Texas to again ramp up border security just weeks into the Biden presidency, which follows Texas winning a court order that halted the new administration's plans to issue a 100-day moratorium on deportations.

Democrats, who are still dusting themselves off from a demoralizing election cycle in which their massive expectations in Texas flamed out up and down the ballot, did not even wait for Abbott's address before blasting his handling of a pandemic. Along the border, the city of Laredo is still grappling with one of the nation's worst outbreaks.

"As the Governor attempts to gloss over the lives that have been lost and the seriousness of the crisis we face, Texans everywhere know things are not right, and they are getting worse,” Texas Democratic Party Chairman Gilberto Hinojosa said. “We must demand more out of leaders or we’ll never get to a point where every one of us has a fair shot to get ahead.”

The State of the State is typically when governors lay out their legislative priorities over the coming year. In Texas, lawmakers meet for only five months every two years, giving legislators only until the end of May to try delivering Abbott's priorities to his desk.

This legislative session in Texas is the first since mass shootings that shook the state before the pandemic, the most deadly of which was a gunman who allegedly confessed to targeting Mexicans when he opened fire at a Walmart, killing 23 people. Abbott formed a task force on domestic terrorism and extremism following the attack but did not mention the shooting during his address Monday night.

Abbott also did not lay out or endorse any specific policing reforms after George Floyd's death last year sparked a global reckoning over police brutality and racial prejudice. Abbott, who attended Floyd's funeral in Houston, did not mention race while saying lawmakers “must provide law enforcement with tools and training they need to ensure the safety that their communities deserve.