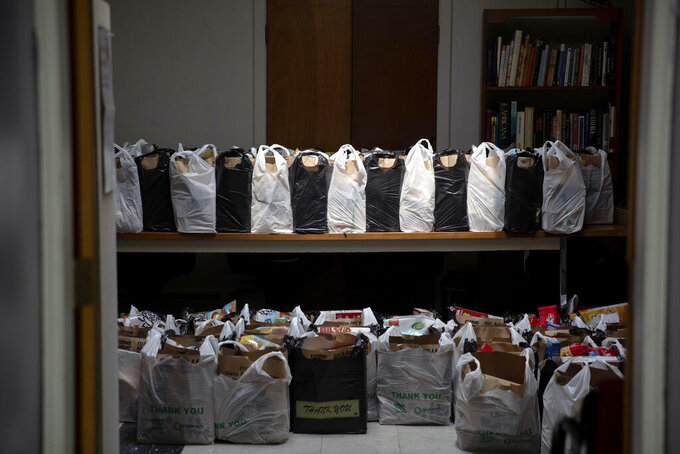 Bags of food wait to be picked up by volunteers at the Mount Hope Community Center to be distributed to families in need, Wednesday, May 6, 2020, in Providence, R.I. The community center has increased their food distribution about 350 percent from when the coronavirus first shutdown the state in mid-March. (AP Photo/David Goldman)

Rhode Island is rolling out an aggressive coronavirus testing program that Gov. Gina Raimondo said Wednesday will help stamp out future outbreaks of the disease.

Aggressive testing is important as she anticipates ending her stay-at-home order and starting a phased reopening of the economy this weekend.

The state is already testing about 3,000 people per day and has tested a higher proportion of its population than any other state, the Democrat said at her daily news conference.

“When it comes to testing we're doing 3 1/2 times better than the rest of America," she said.

She also announced the creation of an “outbreak response team" that can be on the ground within four hours at the location of a potential outbreak to conduct further testing and contact tracing.

The state is launching a coronavirus antibody testing program to get a better idea of how widespread the disease is, the governor said.

The state will randomly select 5,000 Rhode Island residents to get the test at one of four Stop & Shop supermarket locations around the state. She stressed that participation is voluntary.

Antibody testing does not tell whether someone is currently infected with the virus, but whether they were infected in the past.

By testing broad populations for antibodies, researchers hope to learn how widely the virus spread and how deadly it really is.

An investigation into possible unemployment benefits fraud related to the coronavirus pandemic is expanding with as many as 2,000 cases in Rhode Island, authorities said.

The department has received roughly 2,000 reports to date from people who say they have been the victims of “imposter fraud,” agency spokeswoman Angelika Pellegrino said in an email.

Anyone who believes their personal information has been used to file or secure a false claim is being asked to call the FBI’s Providence office or the state Department of Labor and Training.

More than 10,000 people in Rhode Island have now tested positive for the coronavirus, the state Department of Health announced Wednesday.

The state reported 272 new cases, bringing the number of known cases to more than 10,200.

The number of people hospitalized and the number of patients in intensive care were both down slightly from the previous day.

For most people, the virus causes mild or moderate symptoms, but it can cause more severe illness for some, especially older adults and people with existing health problems.

Brown University on Wednesday announced plans for a “double commencement” next spring to celebrate the classes of 2020 and 2021.

Students have been learning remotely since the Ivy League school closed down because of the pandemic.

The university will still hold a virtual commencement for seniors on May 24, President Christina Paxson said in a statement on the school's website.

Brown had intended to bring the seniors back to campus in October for an in-person ceremony, but now anticipates that there will still be restrictions on large gatherings then.

“Our graduating seniors will have the opportunity to celebrate their commencement and their first reunion at the same time," Paxson wrote.

Brown is still developing plans to reopen in the fall, she said.

The fund formed in mid-March by the Rhode Island Foundation and the United Way of Rhode Island has now awarded $7.2 million to nonprofits around the state to help people affected by the virus.