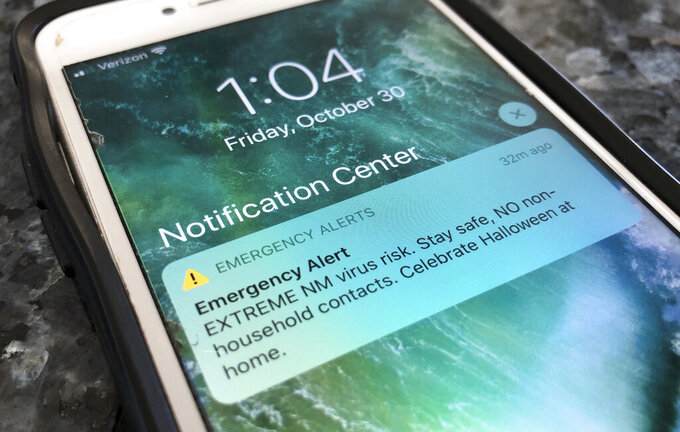 An emergency alert regarding the coronavirus pandemic is displayed on a cellphone Friday, Oct. 30, 2020, in Rio Rancho, N.M. The alert was sent out to New Mexicans across the state urging them to stay home amid a surge in COVID-19 cases and record-high hospitalizations. The state also surpassed the 1,000 mark for deaths related to the virus. (AP Photo/Susan Montoya Bryan)

SANTA FE, N.M. (AP) — Gov. Michelle Lujan Grisham on Saturday said the spread of coronavirus is out of control in New Mexico as she urged residents to stay home and avoid gathering with others to celebrate Halloween.

“Please — do your part to protect yourself and your fellow New Mexicans by celebrating a COVID-SAFE Halloween," the Democratic governor's office said in a Facebook post. “Stay home. Do not gather with others."

State officials on Saturday reported 592 additional known virus cases and 11 additional deaths but said the case data for the day was incomplete due to a technical problem.

“Due to a technical disruption of the electronic laboratory reporting system, the following data reflects only a partial total for today’s case update,” state officials said in a statement. “The delayed results will be included in the state’s reporting as soon as they are received and confirmed.”

The additional cases and deaths reported Saturday increased the state’s totals to 46,490 cases and 1,018 deaths.

The state reported over 1,000 additional cases on Friday when it also reported a single-day record of 13 deaths and when the state's death toll exceeded 1,000.

Lujan Grisham on Friday ordered flags to fly at half-staff starting Monday for a week of mourning. She called the toll “an unfathomable tragedy,” saying the drumbeat of a few more deaths every day should not diminish the acute feeling of loss.

State health officials also renewed their pleas that people adhere to the public health order, which calls for residents to stay home whenever possible, limit contact with others and wear face coverings, among other things.

Coronavirus related hospitalizations reached 354 on Saturday, the ninth consecutive day the state has set a record for that metric.

State officials and administrators from some of the largest hospital systems in New Mexico have warned that the health care system could be overloaded if the trends continue.

The additional 11 deaths reported Saturday included six in Dona Ana County, four in Bernalillo County and one in Otero County.

The additional cases included 187 in Bernalillo County, 127 in Dona Ana County, 41 in Chaves County, 33 in Santa Fe County, 31 in Sandoval County, 22 in McKinley County and 17 in San Juan County.

For most people, the new coronavirus causes mild or moderate symptoms, such as fever and cough that clear up in two to three weeks. For some, especially older adults and people with existing health problems, it can cause more severe illness, including pneumonia and death. The vast majority of people recover.