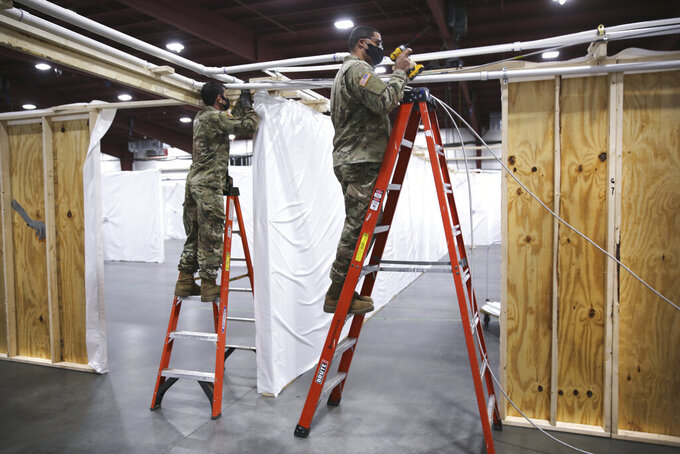 Gov. Phil Scott and the state health commissioner reiterated calls Friday for Vermonters to follow new COVID-19 restrictions, including not gathering with other households and avoiding travel.

They said they have seen very concerning growth in coronavirus cases in Vermont, and four deaths in the past two weeks, after months without a fatality.

“I cannot stress this enough. We need people to limit their contacts with others,” Scott said during his virus briefing.

He urged Vermonters to take a look at the state's case numbers, rising hospitalizations and deaths and states around the country that are exceeding their hospital capacity.

“Also think about the Vermonters we've lost," he said. "They were grandmothers, grandfathers, moms, dads, husbands wives and friends.”

Such deaths are increasing because the amount of virus in the community is rising and getting into facilities that care for seniors, he said.

With rising cases, it's easy to think the worst, said Vermont Health Commissioner Dr. Mark Levine. “But this is not a runaway train yet. It’s picking up speed, but we can get it under control if we all work together.”

Levine also provided news on when Vermont may get its first doses of a vaccine.

“Perhaps the earliest Vermont could see a vaccine on its doorsteps for a limited number of doses would be in the range of Dec. 10,” he said.

The governor clarified the ban on gatherings between households by saying that fitness activities between no more than two people from different households are allowed. Individuals in dangerous or unhealthy situations, may take shelter with another household and individuals who live alone may gather with one other household, he said.

In other news related to the coronavirus in Vermont:

A Rutland nursing home is reporting two residents have died of COVID-19.

The deaths at Rutland Healthcare and Rehabilitation come as Vermont is coping with a surge in cases of the coronavirus.

“Our thoughts and prayers go out to those impacted by COVID-19 during this difficult time, especially the families of the two residents who passed away,” Richard Feifer, chief medical officer for Genesis HealthCare, which runs the facility, said in a written statement.

The Rutland Herald reports t he facility conducted multiple rounds of testing and will continue to test every Sunday, Wednesday and Friday until further notice.

Vermont reported 146 new cases of the coronavirus on Friday, for a statewide total to date of 3,459. Eighteen people were hospitalized, with one in intensive care.

State health departments are calculating positivity rate differently across the country, but for Vermont the AP calculates the rate by dividing new cases by test specimens using data from The COVID Tracking Project.

The Vermont National Guard is expanding a surge hospital at the Champlain Valley Exposition in Essex Junction in case the pandemic causes a need for extra hospital beds.

The field hospitals were mostly dismantled in May, but the state is reassembling some of them during the second wave of the virus.