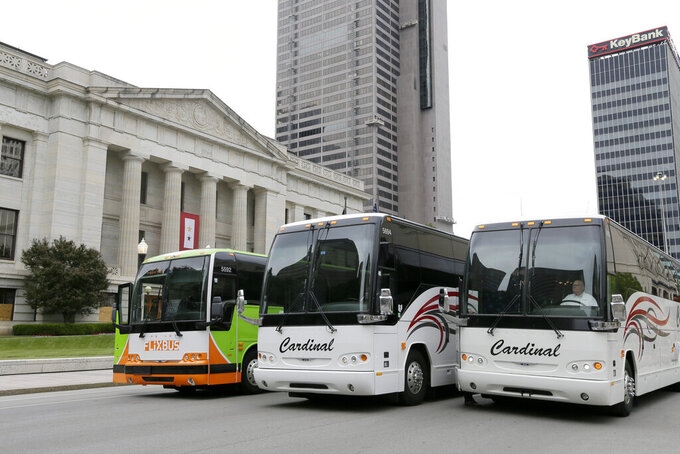 Dozens of buses surrounded the Ohio Statehouse in Columbus, Ohio, on Wednesday, June 17, 2020, in a rolling rally which was one of many taking place at state capitols around the United States as part of "Motorcoaches Rolling for Awareness." The buses eventually took all three lanes of South Third Street between Broad and State, halting southbound traffic as bus drivers sounded their vehicles horns for approximately thirty minutes. The industry which has laid off or furloughed more than 90 percent of its workforce nationally in the wake of COVID-19 is asking for federal assistance. Cardinal Transportation, a leading transportation provider in Columbus, participated in the rally. (Barbara J. Perenic/The Columbus Dispatch via AP)

COLUMBUS, Ohio (AP) — Ohio is seeing a “worrisome” rise in coronavirus cases in five southwestern counties including the Cincinnati and Dayton areas, Gov. Mike DeWine said Thursday, calling the uptick a reminder that the pandemic is still far from over.

DeWine said the increases are coming from spikes in nursing homes, distribution centers and churches, among other places. He said members of the Ohio National Guard will begin widespread testing in the area, and he's in touch with local doctors and mayors.

“The trendlines we’re seeing in these five counties are worrisome,” DeWine said, referring to Clark, Greene, Hamilton (home to Cincinnati), Montgomery (home to Dayton) and Warren.

At least 200 employees at the Dole Fresh Vegetables plant in Springfield in Clark County have tested positive. In Clark County alone, health officials are also monitoring outbreaks at a nursing home, the county juvenile detention center, a hospital and a truck plant, the Springfield News-Sun reported.

Another reason for the increase involves a minister who visited several congregations, DeWine said without providing details.

The state had more than 43,000 confirmed or probable cases as of Thursday, with a jump of 700 new cases since Wednesday, one of the largest one-day increases in weeks. Ohio has recorded 2,633 confirmed or probable COVID-19 deaths, with nursing home residents accounting for seven of every 10 of those deaths.

Ohio has reached the point of learning to live and work with the coronavirus, and the outbreak shows the challenges ahead, the governor said.

The governor said the state is creating a stockpile of personal protective equipment such as gowns, masks and gloves in case of a coronavirus spike.

DeWine and Lt. Gov. Jon Husted also said Thursday they're each taking a 4% cut in pay as state employees see their pay frozen or cut to make up deep deficits brought on by drops in state revenue because of the pandemic. DeWine also said he's donating half his salary to charity each month.

DeWine makes about $159,000 annually, and Husted — who draws part of his salary as head of InnovateOhio, a technology promotion agency — makes about $176,000.

Wednesday marked at least the fifth week in a row that the majority of Ohio's COVID-19 deaths have involved long-term care residents, with 1,860 nursing home residents dying since the pandemic began out of a total of 2,611 confirmed or probable deaths, according to the state data. That's a rate of 71%.

At least 40 residents at one long-term care center in Mahoning County have died of COVID-19 since April, The Repository reported earlier this week.

As the deaths continued, the governor ordered teams of National Guard medical personnel into nursing homes to ramp up testing.

Meanwhile, the state said Thursday that jobless claims continue to fall as the state reopens, though the numbers remain high compared to pre-pandemic times.

For the week ending June 13, the state received 32,788 claims, according to the Department of Job and Family Services. That raises the total number of claims during the pandemic to 1.4 million, or more than the total claims for the past three years combined.

The state has paid more than $4.1 billion in unemployment compensation to more than 700,000 people.

Also Thursday, Attorney General Dave Yost accused an Athens County couple of price gouging, alleging they jacked up the price of bottles of hand sanitizer by more than 1,000% in some cases.