Grace tests positive, knocking him out of contention and PGA 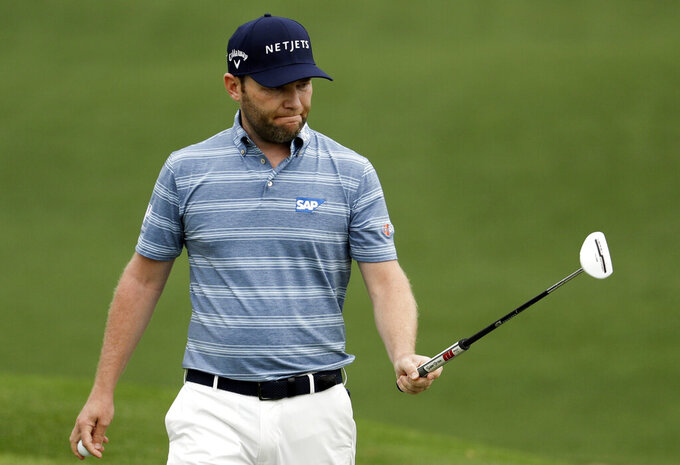 FILE - In this April 11, 2019, file photo, Branden Grace, of South Africa, reacts to a birdie on the second hole during the first round for the Masters golf tournament in Augusta, Ga. Grace tested positive for the coronavirus Saturday, Aug. 1, 2020, a double blow to the South African who was one birdie out of the lead at the Barracuda Championship and now can't play next week in the PGA Championship. (AP Photo/Chris Carlson, File)

TRUCKEE, Calif. (AP) — Branden Grace tested positive for the coronavirus Saturday, a double blow to the South African who was one birdie out of the lead at the Barracuda Championship and now can't play next week in the PGA Championship.

Grace was at 20 points in the modified Stableford scoring system in the Barracuda Championship, two points out of the lead and in the penultimate pairing at Old Greenwood Golf Course. But he felt tired Friday night and thought it had to do with playing in altitude. He was tested to be sure, and it came back positive and he withdrew.

“I wanted to get tested out of respect for my peers and everyone involved with the tournament,” Grace said in a statement to the tour. “While it is unfortunate given my position on the leaderboard, the most important thing is our health.”

Under PGA Tour guidelines, Grace has to self-isolate for 10 days and be without a fever for 24 hours before returning. The PGA Championship starts Thursday in San Francisco.

The tour said Grace's caddie tested negative, but he will quarantine for 14 days. The tour said its contact tracing did not lead to additional testing.

Grace has played in every major dating to the 2014 British Open and holds the major championship record with a 62 at Royal Birkdale in the 2017 British Open.

More than missing a major was a chance to win for the second time on the PGA Tour and the 13th time in his career. He is No. 156 in the FedEx Cup, with only three tournaments remaining for the top 125 to qualify for the postseason. Grace lost the chance to play in two tournament in one day.