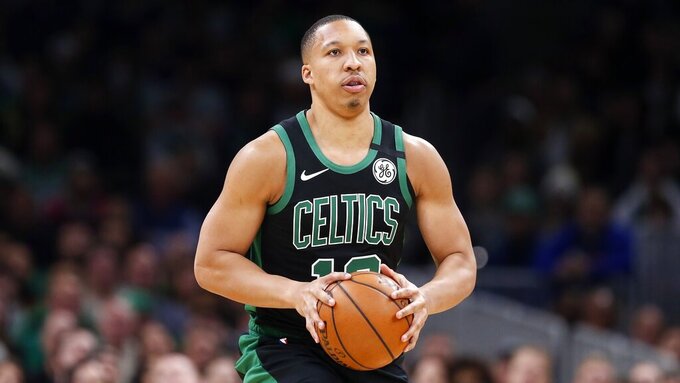 In this March, 8, 2020 photo Boston Celtics' Grant Williams plays against against the Oklahoma City Thunder during an NBA basketball game in Boston. Williams hasn’t been limited to just virtual meetings with teammates during the pandemic. The rookie has been living with Boston teammate Kemba Walker, taking the All-Star point guard up on his invitation to stay with him at his home in Charlotte, N.C. not long after the league shut down in March. Williams says the company has helped him stay in shape and improve on facets of his game. He remains hopeful the NBA season will resume and believes officials will only do so if it can be done safely. (AP Photo/Michael Dwyer)

It was only a year ago that the 21-year-old rookie was sharing living space as a college student during his final season at the University of Tennessee.

So when Celtics teammate Kemba Walker invited Williams to join him at his home in Charlotte, North Carolina, shortly after the NBA went on its pandemic hiatus, Williams jumped at the offer.

“It’s been amazing,” Williams said. “Just hanging out, relaxing, being able to get to know each other better as well as work out together. We’re here, we’re isolating on our own means. ... It was just a great decision.”

Williams, who grew up in the Charlotte area, was initially debating whether to remain in Boston or join his family in North Carolina at the start of the COVID-19 outbreak. But that would have meant being close to his grandparents and potentially putting them at a higher risk of contracting the disease.

“For as much as I talk, I’m glad that he even considered it,” Williams said of Walker’s overture.

Warmer weather in Charlotte as compared to Boston has allowed Williams to use Walker’s outdoor court and other spaces to work on his ball handling and his shooting. He’s also been going through workouts given to him by the Celtics’ trainers.

“I feel like a lot of us are going to be prepared when we get back,” Williams said. “No matter how soon it will be, we’re going to speed up to the peak shape that we can be at and as healthy as we can be, too.”

One scenario being looked at by NBA officials for a restart is for Eastern Conference teams to be based in Orlando and play their games at the vast Disney Wide World of Sports complex. That facility is already equipped with much of the physical and technical infrastructure the NBA would need, having hosted WNBA preseason tournaments, national AAU championships and other multi-team events.

But it remains unclear at this point whether the league would try to resume the season with an abbreviated schedule or proceed to a modified version of the playoffs.

Whatever eventually gets ironed out, Williams is confident it will be done putting players’ health and safety at the forefront.

“It’s my first year so I haven’t gotten to play in the playoffs yet. It’s gonna be a fun time if and when we get the season back,” he said. “I just kind of try to go with the flow and respect that the organization and the NBA will do their best to make the wisest and safest decision possible. … We’re just gonna go with what they give us.”