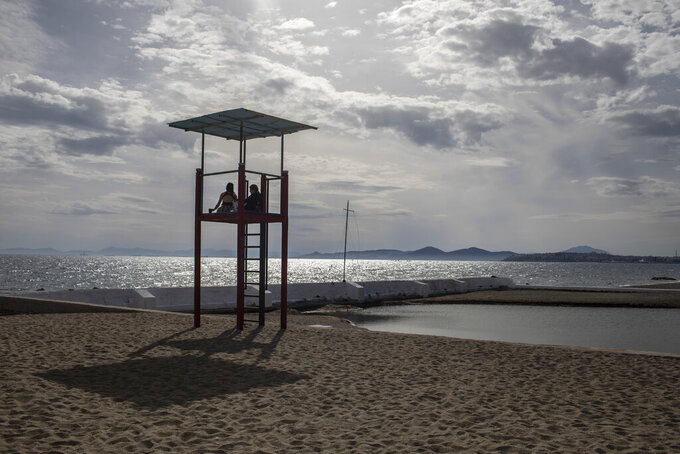 Two women sit on life-guard post, in Alimos beach, a seaside suburb of Athens, on Friday April 23, 2021. Easter holidays are often celebrated with relatives outside Athens and other cities, but the government has said COVID-19 infection levels remain too high to allow free travel.(AP Photo/Petros Giannakouris)

Greece moved closer to investment grade late Friday after Standard & Poor’s upgraded its sovereign rating for the debt-strapped country by one notch to BB from BB- with a positive outlook.

“The upgrade reflects our expectation of a rapid improvement in Greece’s economic and budgetary performance as the adverse impacts of the COVID-19 pandemic subside,” the ratings agency said.

Greece now lies two notches below investment grade, as it continues a long climb back to recovery.

It fell into junk status in 2010 as the country sought its first of three successive international bailouts from other eurozone members and the International Monetary Fund.

Most of its debt is still held by bailout creditors which have provided generous repayment terms but its recovery was cut short by the pandemic, swinging back into recession with a 8.2% contraction of gross domestic product last year.

The crisis also pushed the national debt over 200% of GDP, while longer-than-expected lockdown measures this year forced officials to acknowledge that the official 4.8% growth projection now looks optimistic.

But S&P said massive economic support from EU recovery funds and a continued commitment to reforms by the government despite the crisis were hopeful signs.

“The structural reforms implemented by consecutive Greek governments over the past several years have, in our view, enhanced the predictability of policy-making,” S&P said. “This bodes well for the country’s economic and budgetary outlook once the pandemic’s impact diminishes.”

In a tweet, Greek Finance Minister Christos Staikouras welcomed the news, which was seen as a surprise by many Greek commentators.

“Today’s upgrade of our country by S&P Global Ratings is, undoubtedly. an an extremely positive development for the Greek economy,” he said. “It is the result of designing and implementing the right policies in the economic field, as well as, more generally, the result of the government’s effective policy and its series of reform initiatives.”