Greece kicks off events for bicentenary of independence war 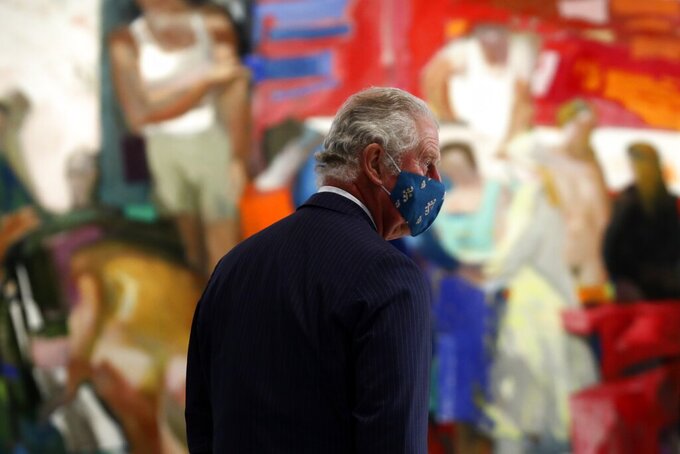 Britain's Prince Charles attends a ceremony at Greece's newly renovated National Gallery in Athens, Wednesday, March 24, 2021. Greece on Wednesday kicked off two days of celebrations to mark the bicentenary of the start of the country's war of independence, although events are far more muted than originally planned due to the pandemic. (AP Photo/Yorgos Karahalis) 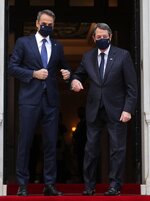 ATHENS, Greece (AP) — Greece on Wednesday kicked off two days of celebrations to mark the bicentenary of the start of the country’s war of independence, although events are far more muted than originally planned due to the pandemic.

Dignitaries from Britain, Russia and France — the great powers that provided vital assistance to the nation's bid for independence from the Ottoman Empire — as well as from Cyprus began arriving in Athens on Wednesday. Celebrations are to culminate in a military parade, accompanied by air force overflights, in central Athens on Thursday, Greece’s Independence Day.

But with Greece struggling with a renewed surge in coronavirus cases and deaths, the public will not be allowed to attend the parade, which will be broadcast live by state television.

Despite being under lockdown-type measures since early November, the country has seen spiraling coronavirus infections, with record numbers of patients intubated in intensive care units and dozens of daily deaths. As of Wednesday evening, the overall pandemic death toll had reached 7,649 and there were about 245,000 total confirmed infections in the country of around 11 million.

On Thursday, major avenues in the center of the capital will be closed to traffic for the parade, while thousands of police were being deployed for security. Authorities have banned seven rallies and protests that had been planned in Athens on Thursday.

The parade is to be attended by Russian Prime Minister Mikhail Mishustin, Britain’s Prince Charles and his wife Camilla, the Duchess of Cornwall, French Defense Minister Florence Parly, and Cypriot President Nicos Anastasiades.

On Wednesday afternoon, Prime Minister Kyriakos Mitsotakis was hosting the visiting dignitaries at Greece’s newly renovated National Gallery, an establishment founded in 1900 that has been shut for the past eight years for renovations and the construction of a sizeable extension. The Athens gallery holds about 20,000 works of art from the post-Byzantine era onwards.

Attendees, all wearing masks that are currently compulsory in indoor and outdoor public places in Greece due to coronavirus measures, sat in socially distanced seats during the brief speeches, before being given a guided tour of paintings related to the Greek revolution.

The event was also attended by Greek President Katerina Sakellaropoulou. With Parly due in Athens later in the day, France was being represented at the art gallery by its ambassador.

The 200th anniversary of the start of Greece’s war of independence comes at a time of frosty relations with neighbor and NATO ally Turkey. Tension between the two countries spiked last year over territorial and energy exploration rights, with warships from both nations facing off in the eastern Mediterranean.

Friction has eased somewhat in recent months, with both sides restarting a long-running process of exploratory talks. Turkey has also withdrawn its exploratory ships from waters claimed by Cyprus and Greece.

“This fact is not insignificant,” Mitsotakis said, after meeting in Athens Wednesday with Anastasiades. “However, it remains to be proven if this will be lasting.”

Mitsotakis said it was “in Turkey’s hands to ensure if this is an honest gesture of de-escalating tension and conforming to international law, or if it is yet another diversionary maneuver.”

Long-standing differences between the two include territorial claims in the Aegean Sea, and the situation in the ethnically divided island nation of Cyprus, split since 1974 when Turkey invaded following a coup aimed at unifying the island with Greece. A Turkish Cypriot state declared in the north is recognized only by Turkey.

The Greek independence revolt started in the Mani region of the southern Peloponnese peninsula in 1821 and continued for years without official foreign support, with the Greeks gradually becoming riven by dissent and infighting. In 1827, with the revolution almost squashed, the war fleets of Britain, Russia and France intervened to destroy a Turkish-Egyptian fleet in the Bay of Navarino, in the western Peloponnese.

This crucial blow enabled the Greeks to fight on and eventually gain independence in 1830.