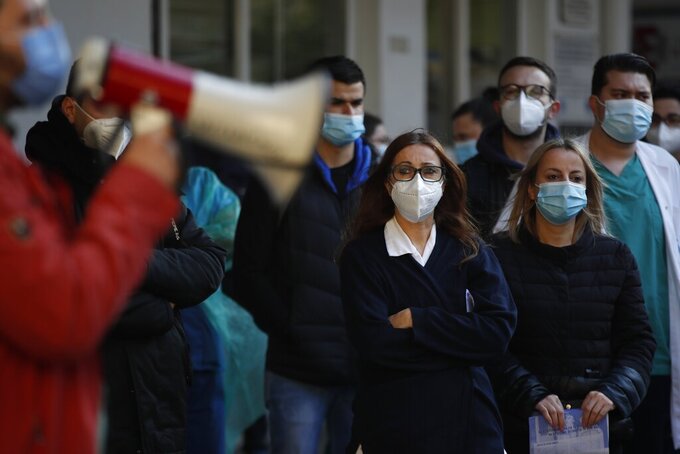 Medical staff gather during a rally to protest over a dispute with Evangelismos state hospital administration in Athens, Wednesday, March 31, 2021. Despite five months of lockdown measures, COVID-19 infections on Tuesday hit a new record in Greece. (AP Photo/Thanassis Stavrakis)

ATHENS, Greece (AP) — Greece is relaxing some coronavirus restrictions despite a surge in infections that's straining hospitals to their limits, with retail stores to reopen and people allowed to drive to places outside their home municipalities for exercise.

Speaking at a health ministry briefing Wednesday evening, Civil Protection Deputy Minister Nikos Hardalias said retail shops — except department stores and malls — will be allowed to reopen as of next Monday, April 5.

The recent measure restricting exercise to any location people could either walk or cycle to was also lifted, with Hardalias announcing driving outside one’s home municipality will be allowed again as of Saturday, but only at weekends. Exercise can be conducted with a maximum of three people, or one family group.

Greece has been under lockdown-type restrictions since early November, with retail stores, bars and restaurants shut, and people only allowed to leave their homes for specific reasons and after either sending a text message to authorities, or carrying a self-declaration form. Violations are punishable by 300-euro ($350) fines.

Despite the restrictions, the country has been experiencing a surge in coronavirus cases and deaths, with a record high in new daily infections on Tuesday, with 4,340 new cases. On Wednesday a further 3,616 cases and 76 deaths were announced, bringing the total number of confirmed infections to over 263,600 and the deaths to over 8,000 in the country of about 11 million.

Authorities said they were relaxing the lockdown measures in recognition of the strain long-running restrictions were placing on the population.

“We know there is fatigue and tiredness,” Kikilias said. “We are talking about small breathers for society.”

Despite the measures — which are mostly the same on paper as those imposed during Greece’s first lockdown at the pandemic’s start last March — compliance has been far more lax this time, and has waned significantly as the weeks turned to months of restrictions.

Hardalias said the new measures, which include limits on the number of people allowed inside shops, would be strictly monitored.

“Given the fatigue after a year of a tough battle, the new mix of measures ... will give a greater degree ... of freedom which in turn will help in the better implementation of the protective measures and we believe will limit” events considered high-risk for transmission such as parties and gatherings in homes — which are banned but widespread.

Earlier Wednesday, a Spanish exchange student was given a suspended sentence and fined for violating lockdown measures and hosting a party with dozens of guests in the northern city of Thessaloniki.

A court found her guilty of violating regulations for the prevention of disease transmission and for breaching the peace, and sentenced her to six months and 10 days in jail, suspended for three years.

The woman, who said she had been in Greece for just one month and hadn’t realized there were lockdown measures in place, was released after her trial.