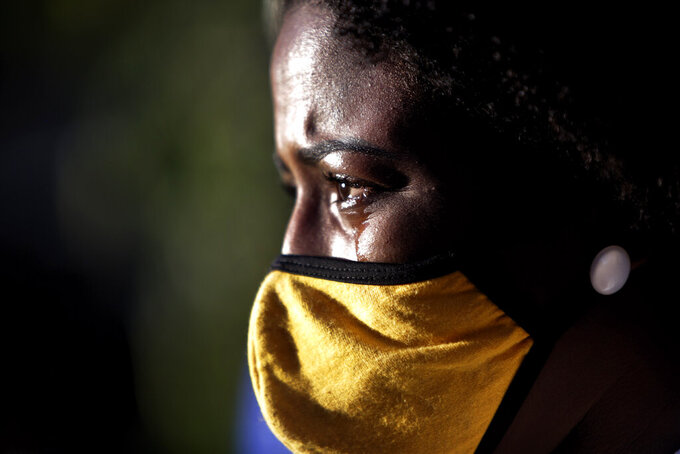 A family member cries during the funeral of Kathlen Romeu, a young pregnant woman killed by a stray bullet, in Rio de Janeiro, Brazil, Wednesday, June 9, 2021. Stray bullets have struck at least six pregnant women in Rio since 2017, but Romeu was the first to die, according to Crossfire, a non-governmental data project that tracks armed violence. (AP Photo/Bruna Prado)

RIO DE JANEIRO (AP) — Friends and family of a young pregnant woman killed by a stray bullet during a police shootout with alleged criminals in Rio de Janeiro gathered to mourn on Wednesday.

For them and other residents of the Brazilian city, the death of Kathlen Romeu — a Black woman from a working-class neighborhood, or favela — was the all-too-familiar outcome of confrontations between police and traffickers. It generated national media attention and some at the cemetery displayed banners of protest, with demonstrations scheduled for later.

More than 100 people went to the 24-year-old interior designer's wake and burial, and they crowded into the narrow alleys of the cemetery. Her grandmother was overcome with emotion and had to be carried out. Few were willing to share their thoughts with reporters.

“We just want justice, that’s all,” one friend said through tears. She declined to provide her name.

Rodrigo Deniz, 25, described himself as Romeu's best friend. “A part of me is being buried now,” he said.

Rio's police have said Romeu was hit by a single shot in her torso during a shootout with criminals. Officers brought her to a nearby hospital, but neither she nor her baby survived. Some residents have questioned whether local traffickers even had time to return police gunfire before Romeu was shot. Police have opened three separate investigations into the shootout.

Romeu had a sizeable following on Instagram, where she often shared photos of herself. More recently, she started posting photos of her new pregnancy.

“I’m discovering myself as a mom, and I get scared thinking about how it will be. ... I laugh, cry, and I’m afraid. A mixture of feelings,″ she wrote in a post one week ago. “Little one, I feel ready to receive you, love you, care for you!!! God bless us!″

Stray bullets have struck at least six pregnant women in Rio since 2017, but Romeu was the first to die, according to Crossfire, a nongovernmental data project that tracks armed violence.

“She was our model in the neighborhood: She came from below, started fighting and she made it,″ Figueiredo said. “We can't take it anymore. We just want peace."

Lins is only a couple miles from the Jacarezinho favela where last month police killed more than two dozen people they alleged were criminals. One of the city’s deadliest-ever police operations, it prompted claims of human rights abuses and days of protest followed.

Mario Braga, senior analyst for risk consultancy Control Risks, said that underfunding of police in Rio means officers often lack preparedness. Shootouts with criminals have proven ineffective over the years, yet the hard-charging method is unlikely to change as long as it appeals to a large portion of voters, he added.

"Most of these cases are focused in low-income areas, favelas, and the numbers show most of the victims of police are young Black males, and some part of society thinks this issue isn’t related to them directly, and is in a parallel reality,″ Braga said by phone from Rio. ″But this has direct consequences for society as a whole.″

A Supreme Court ruling last year prohibited police operations in Rio’s favelas during the pandemic except in “absolutely exceptional” circumstances. Despite the vague wording, it had a marked impact: The number of shootouts in Rio’s metropolitan area dropped 38% from 2019, according to Crossfire data.

The number of shootouts has since crept back up to around pre-pandemic levels, as have the number of deaths Rio state's official data say resulted from police interventions.

In the wake of the Jacarezinho operation, several justices from Brazil’s Supreme Court have said last year's ruling must now be reviewed.

In a tear-filled video post on Instagram on Wednesday, Romeu's partner Marcelo Ramos laid the blame on "unprepared police.″

“Last month, there was the massacre in Jacarezinho, now it's Katy, and next month or tomorrow it's another family losing someone close,″ Ramos said. “We have to speak out.″

Several hundred people marched just outside Lins on Wednesday afternoon after the funeral. They carried banners and printed-out photos of Romeu, and chanted “Justice!″ Once inside the neighborhood, the group recited a prayer in the spot where the pregnant woman was shot. ___ Associated Press writer David Biller and producer Diarlei Rodrigues contributed to this report.