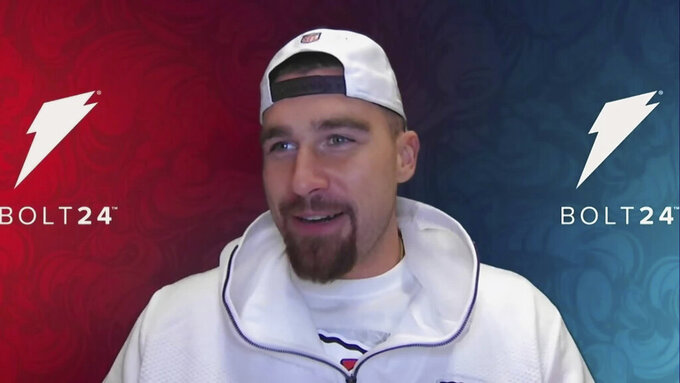 Gronk's still got it.

No, there weren't any LOL-worthy dances or outrageous moments to send social media buzzing. But the 31-year-old Tampa Bay Buccaneers tight end showed up to his video interview session Monday with a secret that had everyone chuckling when it was revealed.

So, Gronkowski was working his way back into shape last offseason — reunited with Tom Brady — after a year away while in retirement. Because of the coronavirus pandemic, players filmed remote workouts on their own and sent them to Bucs strength and conditioning coach Anthony Piroli to get credit for the day.

Fun at first, it got a bit monotonous for Gronkowski after about a week. So, he figured out a way around it. Of course.

“I would bring my shirt out and then I would bring another shirt out, so when I’m running the sprints, I would film myself like 15 times for that workout session,” said Gronkowski, who had 45 catches for 623 yards and seven touchdowns this season. "But I would run in a couple of different shirts because you only had to send in like two or three reps. So then when the next time came, I didn’t have to film myself because I already filmed myself running in a different shirt every time on that one day.

“And he hasn’t had a clue to this day that I was tricking him about half the time during those virtual workouts.”

Well, now he does.

Typical Gronk. Give him an opening — for a joke or a big play — and he's all over it.

“Every day’s a new day with him,” Buccaneers tight ends coach Rick Christophel said. “He’s just a joy to be around.”

Same for Travis Kelce, the Kansas City Chiefs' record-breaking tight end whose larger-than-life personality — his touchdown celebrations are wildly popular views on social media — has put him on par with Gronkowski.

Especially on the field. And to Kelce, that's good company to be in.

“The guy is an unbelievable person, talent, you name it," Kelce said. "I might be one of the biggest Gronk fans out there. Let it be told, man.”

Kelce broke George Kittle's NFL record for yards receiving by a tight end this season with 1,416. He also has the most 1,000-yard receiving seasons at the position, doing it in five straight years. Kelce's consistently dominant production also earned him a four-year, $57 million contract extension last summer.

That's something even Gronkowski, who has 566 career receptions for 8,484 yards and 86 touchdowns and a slew of his own records — along with three Super Bowl rings — can appreciate.

Truth is, Gronkowski is the prototype for an era of tight ends that became focal points of offenses. He was a hulking, physical matchup nightmare for defenses in his prime with the Patriots. Gronkowski would punish people as a blocker — and also run through, over and past defenders week after week.

“You don’t see that in every single offense,” Kelce said. “And what that did for a guy like myself coming into the league was it gave coach Andy Reid an understanding of, OK, we can use the tight end position a certain way if he works at his craft enough to be able to be accountable for his teammates in that regard.”

Kelce is exactly that for the Chiefs with 612 catches for 7,881 yards and 48 TDs in eight seasons. But he's a leaner, swifter type of tight end who lines up more like a wide receiver with Patrick Mahomes routinely looking for him to make big plays.

“The way he’s able to read coverages and understand what the defense is doing, and how to get himself and others open is what makes him so special,” Mahomes said.

Kelce, who converted from quarterback to tight end in college, pored over film of the top players at the position — guys such as Gronkowski, Tony Gonzalez and Antonio Gates — when he broke into the league to find his niche.

“I mean, I’m sitting here and I listen to everybody tell me I’m a wide receiver,” Kelce said. “I’m like, call me whatever you want to call me. I’m a football player that’s out there being accountable for his teammates. I’m doing what my coaches on my team ask me to do, and that’s just try to win my matchups when presented them.”

And that's what both Kelce and Gronkowski have been doing their entire careers.

“Tight ends that can get out of breaks and can separate, those are the most dangerous ones: the Gronks, the (Jason) Wittens, the Antonio Gates, the Kelces," said Bucs outside linebackers coach Larry Foote, who played against both Gronkowski and Kelce. “You can’t really defend it. You’ve just got to be ready to drive and break and tackle.”

By watching them celebrate in the end zone. And they'll inevitably be laughing about it with everybody later.

“People want to grow up to be a tight end, which is pretty, pretty awesome.”