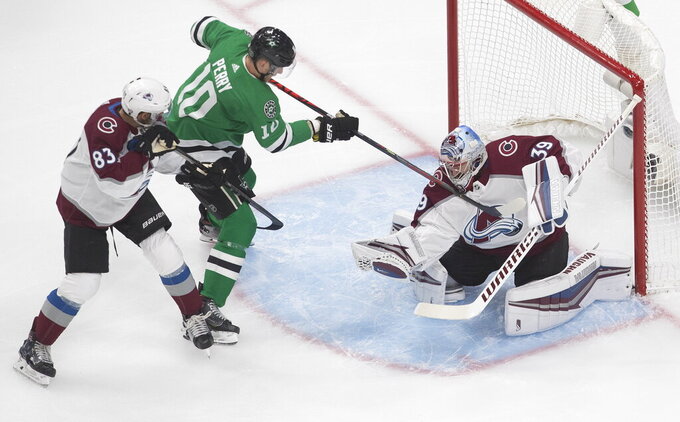 Jared Bednar intends to ride the hot goaltender throughout the playoffs.

The only thing: Which one?

The Colorado Avalanche coach has a goalie situation of the good variety with Pavel Francouz and Phlipp Grubauer presenting strong cases to be the the No. 1 goaltender.

Grubauer’s case: Not only the starter for last season’s playoff run but was lights out in the first game of the round-robin format against the defending Stanley Cup champion St. Louis Blues.

Francouz’s counter-argument: Had the lower goals-against average during the regular season and posted a shutout victory over Dallas on Wednesday.

“It’s not rocket science,” Bednar said of his decision.

In this instance, it just might be that complicated.

Both have compelling arguments.

Bednar maintained that he’s going to pick the goaltender based on the following criteria: How rested they are and their confidence level in net.

For now, Grubauer grabs the lead based on the fact he was the starting goaltender when he wasn't injured (he missed 20 games). But Francouz has made this an awfully close race.

“It’s a good problem to have,” said Bednar, whose team is 2-0 in round-robin play to decide the top four seeds and can secure the No. 1 spot with a win against Vegas on Saturday. “We’ll make our decisions on who’s going to start as quickly as we can to give our guys the time they need to prepare.”

The team obviously has confidence in both given their level of play. The two goaltenders have each other's back, too.

"I don’t think there’s a competition between Frankie and me,” Grubauer said last month when the team went through training camp in Colorado. “It’s a competition between the Colorado Avalanche and the St. Louis Blues, or whoever we’re going to face. So whoever gets the call between the pipes has got to do his job. If you’re not in the next game, the next guy’s got to step up.”

Grubauer began the season as the starter before going through a rash of injuries. That opened the net for Francouz, the 30-year-old from Czech Republic who signed with the Avalanche as a free agent in 2018 and inked a two-year extension in February.

Before the season was shut down due to the COVID-19 pandemic, it appeared Francouz would be the starter with Grubauer sidelined with a lower-body injury. Although, Grubauer contended he was nearing a return.

Bednar has the utmost confidence in Grubauer given the 28-year-old from Germany helped the Avalanche upset Calgary, the top seed in the West, last season in the playoffs before being eliminated by San Jose in Game 7. Grubauer also was a backup on the Washington Capitals team that hoisted the Cup in 2018.

Grubauer was stellar in his start against the Blues. He allowed a first-period goal and nothing else, paving the way for Nazem Kadri to score with 0.1 seconds on the clock in a 2-1 comeback victory.

Then there’s Francouz, who finished tied for fifth in the NHL in save percentage (.923) and seventh in goals-against average (2.41) during the regular season. Then he allowed nothing to get by him during his first postseason appearance. He made 27 stops during a 4-0 win against Dallas.

He's the first goaltender in Avalanche/Quebec Nordiques history to record a shutout in his postseason debut. Not only that, but he becomes the sixth goaltender in franchise history to notch a shutout, joining the likes of Patrick Roy (18 times), David Aebischer (one), Craig Anderson (one), Dan Bouchard (one) and Grubauer (one).

Francouz said he wasn't the least bit nervous, which had him on edge.

“That kind of scared me because usually I’m pretty nervous,” he said. “I was a little bit afraid of that. It didn’t affect my performance. I don’t even know why but I felt pretty comfortable.”

“The fact is that Frankie is pushing him and helping (Grubauer) play better and he’s helping Frankie play better. It’s a healthy relationship,” Bednar said. “It’s just having trust in two guys and someone’s got to have the net. If he does a really good job, he’s likely to stay in.”