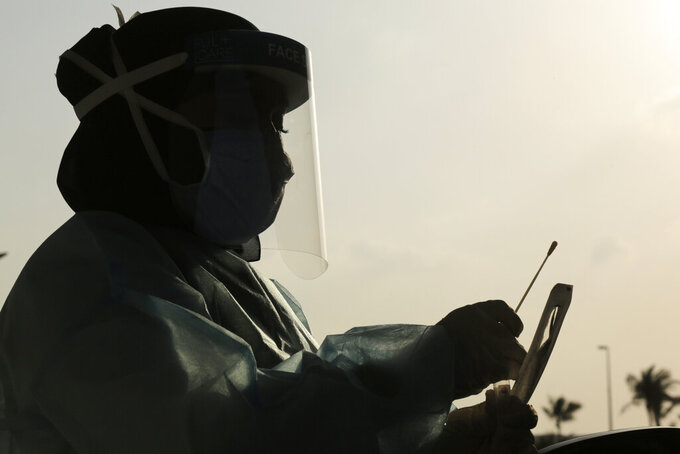 Saudi health worker, Wedad Modaifen collects a swab sample for a polymerase chain reaction (PCR) test at drive-through testing center, at King Abdulaziz University in Jiddah, Saudi Arabia Wednesday, Feb. 3, 2021. In Saudi Arabia, where authorities already have banned travel to the kingdom from 20 countries including the U.S., officials ordered all weddings and parties suspended. It closed down all shopping malls, gyms and other locations for 10 days, as well as indoor dining. (AP Photo/Amr Nabil)

With populations including largely young and healthy foreign laborers, many Gulf countries have avoided the higher death tolls seen elsewhere around the world. However, reported case numbers appear to be rising since the New Year, sparking concern even as several regional countries have some of the highest per capita vaccination rates in the world.

In Saudi Arabia, where authorities already have banned travel to the kingdom from 20 countries, including the U.S., officials also ordered all weddings and parties suspended. It closed down all shopping malls, gyms and other locations for 10 days, as well as indoor dining. Authorities warned the new measures could be extended.

The kingdom also ordered cemeteries to ensure graveside funerals have a distance of 100 meters (328 feet) between them.

State-run Saudi Press Agency blamed the new procedures on “the emergence of indicators of an increase in the epidemic curve in some regions of Saudi Arabia that were caused by lax implementation of the preventive and precautionary measures and approved protocols.”

Saudi Arabia saw a peak in coronavirus cases in June. The kingdom brought those daily reported case numbers down under 100 in early January, but reported over 300 cases on Wednesday alone, according to government statistics.

In Kuwait, authorities have ordered a two-week ban on foreigners arriving to the country beginning Sunday. Separately, officials have ordered most businesses closed from 8 p.m. to 5 a.m. beginning Sunday for the next month. It closed health clubs, spas and gyms, as well as banned celebrations for its upcoming Feb. 25 National Day.

“Non-compliance and recklessness could take the country back to square one in its fight against the pandemic,” Kuwaiti Health Minister Dr. Basel Al Sabah said, according to the state-run KUNA news agency.

Kuwait similarly saw case numbers drop beginning in late November, only to begin to spike after the New Year. The small nation has reported over 166,000 cases of the coronavirus, with 950 deaths.

Qatar similarly announced new restrictions Wednesday on daily life, though not as severe as other countries. In Doha, the state-run Qatar News Agency quoted COVID-19 task force chairman Dr. Abdullatif al-Khal as warning that “a remarkable increase with an accelerated pace in the number of infections and the reproductive factor of the virus were recorded, which may be an early indicator of a possible second wave.”

Qatar also has seen cases begin to rise after the New Year. Overall, the country has reported over 152,000 cases of the virus, with 240 deaths.

Oman, which has closed its land borders since mid-January but kept flights going, has been warning its public that cases continue to rise. It also reported finding cases of people infected with coronavirus variants.

Omani Health Minister Dr. Ahmed bin Mohammed al-Saidi also said earlier this week that “some people (have been) taking off their tracking bracelet after arriving at the country’s border crossings, and putting them on elderly people who do not usually leave the home” to avoid quarantining, according to the Times of Oman. The sultanate requires people to remain quarantined at home for a week after coming into the country.

Oman has reported over 134,000 coronavirus cases, with 1,500 deaths attributed to the virus.

Earlier this week, Dubai in the United Arab Emirates, which opened itself as an international travel destination in July, closed all bars and pubs for the entire month of February and limit other activities after a spike in coronavirus cases followed New Year’s Eve celebrations that drew visitors from around the world.

Dubai authorities also warned hotels and restaurants to “postpone any activity that leads to large gatherings such as weekend brunches," the state-linked newspaper The National reported. Dubai's alcohol-soaked weekend brunches, which feature unlimited food and drinks, had been going on at some restaurants and bars despite the pandemic.