Gurley says deal with Falcons 'like a little homecoming' 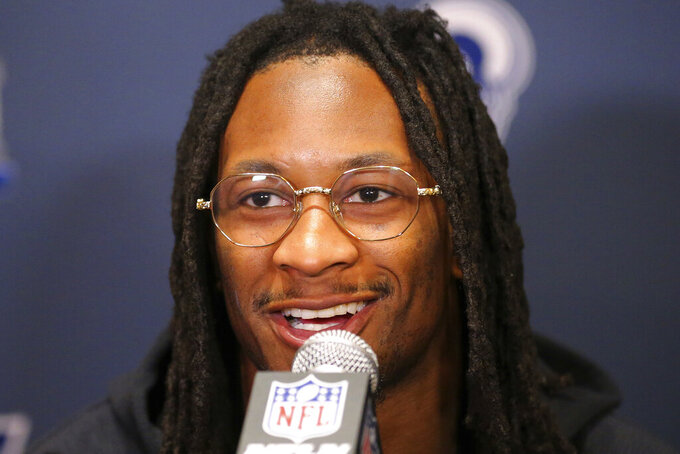 FILE - In this Jan. 31, 2019, file photo, Los Angeles Rams running back Todd Gurley speaks to reporters during a press availability ahead of the NFL Super Bowl 53 football game against the New England Patriots in Atlanta. Todd Gurley will be making a homecoming to the state of Georgia when the former Georgia Bulldogs standout begins the second phase of his NFL career with the Atlanta Falcons. Gurley, who was cut by the Rams, is expected to talk on Tuesday, April 7, 2020, about the one-year deal with the Falcons that was announced by the team on Monday. (AP Photo/John Bazemore, File)

ATLANTA (AP) — Todd Gurley can't think of a better way to prove he is still one of the NFL's elite running backs than a homecoming to the state of Georgia.

For Gurley, the former standout for the Georgia Bulldogs, the move to the Atlanta Falcons after five seasons with the Los Angeles Rams is "like a little homecoming.”

“I feel like I should have been there," Gurley said Friday in a media conference call. "It’s perfect timing, for sure.”

Gurley has agreed to a $6 million, one-year deal with the Falcons. The framework of the deal was agreed to on March 20, less than 24 hours after Gurley was released by the Rams. Details were finalized Monday.

The Falcons on Thursday posted a “Welcome home” message on their Twitter account which included a video of Gurley wearing a red Georgia cap and shirt.

Gurley is still revered by Georgia fans. His status in the state was not lost on general manager Thomas Dimitroff and the Falcons.

“Todd Gurley, of course, a big, big thing in this state,” Dimitroff said this week.

“I think it’s awesome to have him back,” Smart said recently. “Number one, not only is he a great player but a great ambassador for our program. I can’t tell you how many times he’s been at large events ... and he represents Georgia so well and has done so much for our program.”

Just as he flourished in three seasons at Georgia, running for more than 3,000 yards, Gurley rose to the top of the NFL's running backs with Los Angeles. He was the 2017 Offensive Player of the Year, and his 58 rushing touchdowns since his 2015 debut lead the league. He ran for 5,404 yards in that span, only 1 yard behind Ezekiel Elliott for the NFL lead.

The 25-year-old Gurley is young, but his surgically repaired left knee has caused concern. Gurley had a firm response when asked if he wants to prove anything to those who doubt he can still play up to his standards as an All-Pro selection in 2017 and 2018.

While the Rams must contemplate the future of their offense without Gurley, the Falcons must determine if their new lead back can handle a dominant share of the carries.

Atlanta needs Gurley for more than his draw to ticket-buying fans. The Falcons, coming off consecutive 7-9 seasons, ranked 30th in the NFL in rushing in 2019. Gurley must add more balance for a passing game led by quarterback Matt Ryan and receivers Julio Jones and Calvin Ridley.

Dimitroff has left open the possibility of adding another running back in the draft. The Falcons must make those decisions without the benefit of knowing the outcome of Gurley's physical.

Dimitroff said every free-agent contract this year includes protections for the team because the league is not allowing players to report to new teams immediately for physicals during the coronavirus pandemic.

“Obviously, things are very different now per the contract language and how we go about getting someone signed,” Dimitroff said. “... We look closely at it. We have language in our contracts that are going to protect us and the player. If the player comes in and has an issue that he might not pass a physical, that’s something that we’ll address then.”

Gurley's troublesome knee was an issue in the Rams' 2018 Super Bowl season. Questions carried over into last season, even though he played in 15 games.

Gurley said he is not worried about passing a physical.

“Then when you go back through and watch the tape you get a chance to see how he would fit in on our team,” Quinn said.

“I think Todd is explosive," Dimitroff said. “I think Todd can still tote the rock very, very well. He’s going to be a big-time playmaker, I believe.”