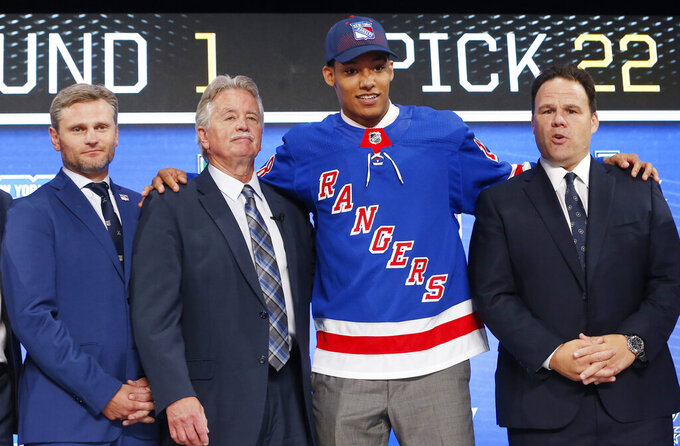 FILE - In this June 22, 2018, file photo, K'Andre Miller, second from right, wears a New York Rangers jersey and cap after being selected by the team during the NHL hockey draft in Dallas. A hacker posted a racial slur 45 times in an online fan video chat Friday, April 3, 2020, with black Rangers prospect Miller. The NHL team scrambled to disable the hacker it called “a vile individual” on the Zoom chat with Miller, the 20-year-old former Wisconsin defenseman drafted No. 22 overall in 2018. (AP Photo/Michael Ainsworth)

The NHL team scrambled to disable the hacker on the Zoom chat with K’Andre Miller, the 20-year-old former Wisconsin defenseman drafted No. 22 overall in 2018.

“A vile individual hijacked the chat to post racial slurs, which we disabled as soon as possible," the Rangers said in a statement. "We were incredibly appalled by this behavior, which has no place online, on the ice, or anywhere, and we are investigating the matter.”

The hacker repeatedly posted the one-word slur in all capital letters on the Rangers' “Future Fridays” series on Twitter.

“The National Hockey League is appalled that a video call arranged today by the New York Rangers to introduce their fans to one of the league’s incoming stars, K’Andre Miller, was hacked with racist, cowardly taunts.The person who committed this despicable act is in no way an NHL fan and is not welcome in the hockey community.

“No one deserves to be subjected to such ugly treatment and it will not be tolerated in our league. We join with the Rangers in condemning this disgusting behavior.”

Miller signed a three-year, $3,825,000 contract a day before the NHL announced it was suspending the season because of the coronavirus. The 6-foot-5 defender from St. Paul, Minnesota, played two seasons at Wisconsin.

Rangers defenseman Jacob Trouba reacted to the hacking on Twitter.

“What happened today was inexcusable and cowardly,” Trouba said. “Racism has no place in the hockey community or the world. @kandre_miller we are excited to have you as a part of the @NYRangers and I look forward to having you as a teammate.”

“Couldn’t of said it better. This team and this organization sticks together. You are one of us and we have your back!”