Handle with care: Brignone's crystal globes come in the mail 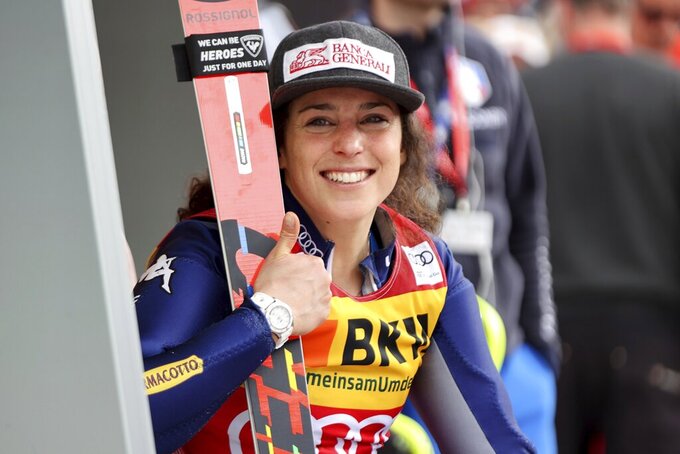 ROME (AP) — The package that Italian skier Federica Brignone anxiously awaited while in isolation wasn’t from Amazon or the local supermarket.

Amid a worldwide suspension of sports events because of the coronavirus pandemic, the heavy trunk held something every bit as precious: trophies honoring a season full of racing and emotions.

The trophies were delivered to Brignone’s parents’ house because her own home lies further up the mountainous road in the Valle d’Aosta town where couriers usually don’t go.

“So my brother sent me a photo with the trophies and saying, ‘Oh, are they yours? Did you order them?’ Then I brought them to my house,” Brignone said in a video interview with The Associated Press from her living room.

For the record, Brignone did not feel the need to disinfect the trophies.

“They were in a box, I don’t know how many days, so not a problem,” she said after getting the big globe out of the case to display for the interview.

Brignone clinched the overall title when the circuit was cut short because of the virus — preventing a possible comeback from American rival Mikaela Shiffrin.

Shiffrin was preparing to return from a six-week break following the death of her father when the last races still on the schedule in Åre, Sweden, were also called off.

“It was not good what happened to her. But we also raced 30 races. They cut nine races for all my competitors but also for me,” Brignone said. “I was skiing really good at the end of the season. I was training really hard in Åre. I was skiing fast. I really wanted to end this season in a better way.”

After the Åre cancellation, the International Ski Federation said it would arrange for “the globes’ distribution and appropriate presentation opportunities to recognize the athletes achievements, once the coronavirus crisis has passed.”

Brignone can’t wait for the day when she can celebrate officially with her teammates, coaches and fans — and hear the Italian anthem played in her honor.

That might mean a summer ceremony at the headquarters of the Italian Winter Sports Federation in Milan, something similar at FIS offices in Switzerland, or she might have to wait until the opening race of next season in Sölden, Austria.

“Sooner is the best. If it’s next year you’re already focusing on the next season so I think it will be too late,” she said while drinking her post-lunch espresso. “But better than nothing.”

Either way, Brignone is planning an extensive celebration in her home village of La Salle.

“We have time now to organize it,” she said. “It’s going to be for everybody.”

The party won’t be too wild, though, because Brignone comes from a family of athletes and her parents don't drink.

The night that Brignone arrived home from Åre, she celebrated simply with a family dinner. Her younger brother, Davide, is also her coach, and her mother, Maria “Ninna” Rosa Quario, was a World Cup skier who won four races on the circuit from 1979-83.

It was the type of all-around success that propelled Shiffrin and Lindsey Vonn to the overall title in recent years.

Like her more successful American counterparts, Brignone is a marketable personality. Besides her native Italian, she also speaks fluent French and English, plus some German.

Already well known in Italy, Brignone’s overall title served as a source of inspiration at a time when the spread of the virus was near its peak in the country. Medical workers at a hospital in Piacenza were so moved that they took time away from their urgent care of infected patients to write Brignone a letter of appreciation.

The next challenge for the 29-year-old Brignone will be backing up her success on the World Cup circuit and seeking a gold medal at next year’s world championships on home snow in Cortina d’Ampezzo and at the 2022 Beijing Olympics.

While Brignone won silver in giant slalom at the 2011 worlds and bronze in GS at the 2018 Pyeongchang Olympics, she has never stood atop the podium at a major championship.

Still, Brignone said she had already realized all of her childhood dreams by winning the overall title and medals at worlds and Olympics.

“I’m still really motivated and I want more," she said. "But in some way I’m also free that everything that will come it’s going to be a plus and I can just enjoy it and be happy about my career already."