Hands the key to keeping a grip in Olympic climbing 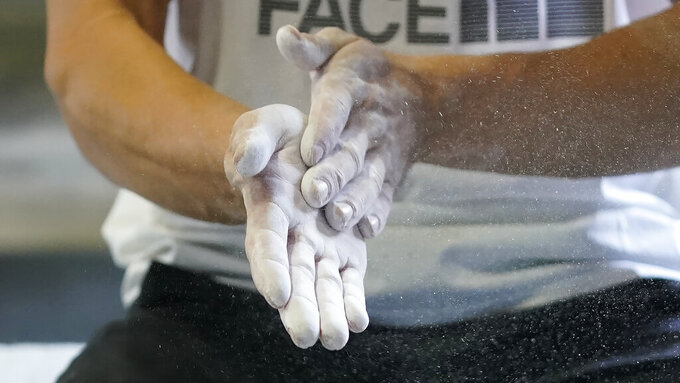 Nathaniel Coleman rubs his hands before climbing during practice on Wednesday, May 26, 2021, in Salt Lake City. "For the most part, people were psyched," American Olympic climber Coleman said. "They knew the sport would get more attention, a lot more inflow of money and kind of be recognized as the high-quality sport that it is." Climbing is an Olympic sport for the first time, and the spotlight will introduce a massive audience to what can be a lonely pursuit. (AP Photo/Rick Bowmer)

SALT LAKE CITY (AP) — The skin stretches taught, veins pouring in tributaries over the linear lines of the carpals and metacarpals.

The phalanges fall into line like a picket fence with boards of varying lengths, the knuckles unknobby. They're long, yet not spindly, even muscular — if fingers can be muscular.

The palms are proportional, powerful like mini car compactors. The fingernails are closely cropped, tips arching in unblemished partial ellipses.

The cue is in the cuticles, chalky halos announcing these are the hands of a climber.

Flip over Kyra Condie's appendages and find more proof: calluses not quite on the fingertips, not quite centered on the final pad of each digit.

“Honestly, my hands are less ugly than people would think they are,” said Condie, one of four American climbers headed to the Tokyo Olympics. “People picture like torn apart, bloodied everywhere. That does happen, but it’s not like a daily occurrence.”

Climbers' instruments are their hands.

Hands are the main contact point to the only obstacle in the sport, a sheer wall freckled with holds set at an array of angles, some no wider than a fingertip.

Strength, in muscle and skin, is paramount. A breakdown in either is disastrous.

“The hands are our main tool,” U.S. Olympian Nathaniel Coleman said. “Every little muscle in our forearms, in our hands are essential for using our entire body to climb.”

Serious climbing is a constant full-body workout hinged at the fingers.

Those pullups most of us struggle to do more than a couple? Climbers do it from their fingertips, sometimes one handed — over and over again.

They practice on hang boards bolted to walls, dangling by nothing but their fingers. Rest during a climb constitutes clinging to holds with hands and feet.

Climbing's Olympic debut in Tokyo this month will include three disciplines: lead, bouldering and speed.

“Almost more important than anything else is your hands being able to have good finger strength, healthy fingers so you don’t pop a tendon or anything like that,” American Olympic climber Collin Duffy said. “Every single time you’re on the wall, you’re using your hands in some fashion.”

The minutes and hours between those times on the wall are spent making sure their hands aren't too battered to do it again.

A football or basketball player might be able to tape up an injured digit and keep playing.

Climbers don't have that luxury. A skin breakdown could mean the end of a competition, a finger pulley injury up to a year on the shelf.

No wonder climbers treat their hands like they have a pair of priceless vases at the end of their arms.

“Imagine if you were an F1 driver and didn’t get to choose your tires, so next time you go out, you have completely burned out tires for the next race,” Condie said. “That’s kind of like what skin is. It’s like, OK, this time the track is wet, but you have no control over it at all.”

Sweat is every climber's enemy, so they coat their hands in chalk before every climb to prevent slippage. Some take it a step further, bringing battery-operated fans to dry their hands before attacking the wall.

The problem: All the drying can lead to cracking.

Lotions, balms and salves are essential to most climbers' hand-care toolkits, but there is a fine line. Too soft and the callouses break down, maybe even break off.

Soaking in water has the same effect, so climbers do dishes wearing rubber gloves or, better yet, leave it to someone else. Climbers have been known to wear rubber gloves in the shower before climbing. Find yourself soaking in a hot tub with a group of climbers and you'll likely be the only person whose hands are in the water.

Not for the nails. For the callouses.

An imperfection on a callous can catch on a crystal in the rock or a sharp edge, so those have to be sanded down or trimmed off. Files and sandpaper can prevent cuts from opening up. Razors are good for trimming because fresh skin heals faster than callouses.

Some climbers walk around with rocks in their pocket to try making their skin hard. One climber supposedly burned his fingertips on a hot tea kettle to make his skin harder.

There are even reports of climbers immersing their hands in water and running an electrical current to cut down on excessive sweating.

“People try control it as much as possible,” Condie said. “There are some interesting methods out there, but whatever it takes.”

Those hands are a precious commodity in the climbing world.