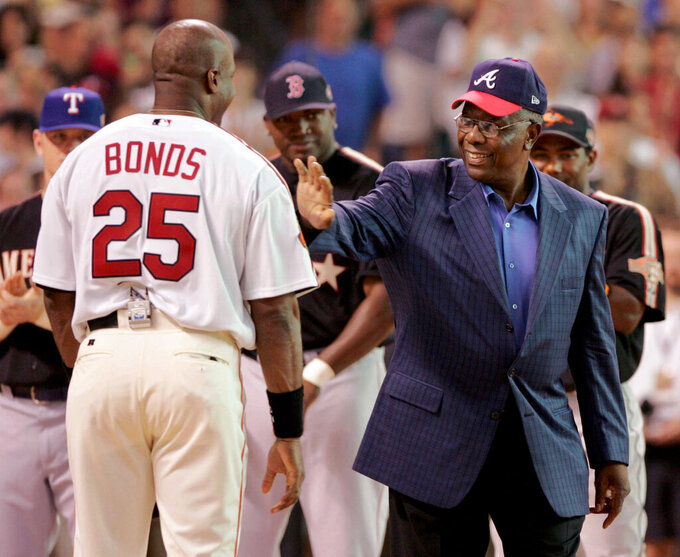 FILE- In this July 12, 2004, file photo, home run record holder Hank Aaron greets San Francisco Giants slugger Barry Bonds before the start of the All-Star Home Run Derby in Houston. Hank Aaron, who endured racist threats with stoic dignity during his pursuit of Babe Ruth’s home run record and gracefully left his mark as one of baseball’s greatest all-around players, died Friday. He was 86. The Atlanta Braves, Aaron's longtime team, said he died peacefully in his sleep. No cause was given.(AP Photo/Eric Gay, File) 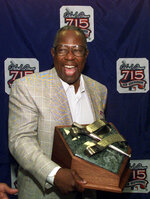 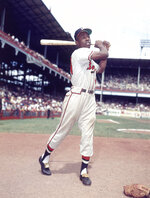 ATLANTA (AP) — Hank Aaron, who endured racist threats with stoic dignity during his pursuit of Babe Ruth’s home run record and gracefully left his mark with 755 homers and a legacy as one of baseball’s greatest all-around players, died Friday. He was 86.

The Atlanta Braves, Aaron’s longtime team, said he died peacefully in his sleep. No cause was given.

Aaron made his last public appearance just 2 1/2 weeks ago, when he received the COVID-19 vaccine. He said he wanted to help spread the word to Black Americans that the vaccine is safe.

“Hammerin’ Hank” set a wide array of career hitting records during a 23-year career spent mostly with the Milwaukee and Atlanta Braves, including RBIs, extra-base hits and total bases.

But the Hall of Famer will be remembered for one swing above all others, the one that made him baseball’s home-run king.

It was a title he would hold for more than 33 years, a period during which the Hammer slowly but surely claimed his rightful place as one of America’s most iconic sporting figures, a true national treasure worthy of mention in the same breath with Ruth or Ali or Jordan.

George W. Bush, a one-time owner of the Texas Rangers, presented Aaron in 2002 with the Presidential Medal of Freedom __ the nation’s highest civilian honor.

“The former Home Run King wasn’t handed his throne," Bush said. “He grew up poor and faced racism as he worked to become one of the greatest baseball players of all time. Hank never let the hatred he faced consume him.”

On April 8, 1974, before a sellout crowd at Atlanta Stadium and a national television audience, Aaron broke Ruth’s home run record with No. 715 off Al Downing of the Los Angeles Dodgers.

But Aaron’s journey to that memorable homer was hardly triumphant.

He was the target of extensive hate mail as he closed in on Ruth’s cherished record of 714 __ much of it sparked by the fact that Ruth was white, Aaron was Black.

Aaron was shadowed constantly by bodyguards and forced to distance himself from teammates. He kept all those hateful letters, a bitter reminder of the abuse he endured and never forgot.

“This is just the way things are for Black people in America,” he once said. “It’s something you battle all of your life.”

Aaron spent 21 of his 23 seasons with the Braves — first in Milwaukee, then in Atlanta after the franchise moved to the South in 1966. He finished his career in Milwaukee, traded to the Brewers after the 1974 season when he refused to take a front-office job that would have required a big pay cut.

While knocking the ball over the fence became his signature accomplishment, the Hammer was hardly a one-dimensional star. In fact, he never hit more than 47 homers in a season (though he did have eight years with at least 40 dingers).

But it can be argued no one was so good, for so long, at so many facets of the national pastime.

He posted 14 seasons with a .300 average, the last of them at age 39, and claimed two National League batting titles. He finished with a career average of .305.

Aaron also was a gifted outfielder with a powerful arm, something often overlooked because of a smooth, effortless stride that his critics mistook for nonchalance. He was a three-time Gold Glove winner.

In addition, Aaron posted nine straight seasons with double-figure stolen bases, including a career-best of 31 in 1963 when he joined Ken Williams and Willie Mays as only the third member of the 30-30 club — players who have totaled at least 30 homers and 30 steals in a season.

Six-feet tall and listed at 180 pounds during the prime of his career, Aaron was hardly an imposing player physically. But he was blessed with powerful wrists that made him one of baseball’s most feared hitters.

Aaron hit 733 homers with the Braves, the last in his final plate appearance with the team on Oct. 2, 1974. Exactly one month later, he was traded to the Milwaukee Brewers.

Aaron became a designated hitter with the Brewers, but managed just 22 homers over his last two seasons. He retired after hitting .229 in 1976.

Even so, his career numbers largely stood the test of time. The home run mark lasted until Barry Bonds hit his 756th on Aug. 7, 2007.

Bonds retired with 762 homers, but many consider Aaron the true home-run king because of steroid allegations that continue to hound his successor.

He was never one to swing for the fences. He just happened to hit a lot of balls that went over the fence.

“I feel like that home run I hit is just part of what my story is all about,” Aaron said.

He was NL MVP in 1957, when the Milwaukee Braves beat the New York Yankees in seven games to give Aaron the only World Series title of his career. It also was his lone MVP award, though he finished in the top 10 of the balloting 13 times.

Aaron was selected for the All-Star Game 21 consecutive years — every season but his first and his last. His only regret was failing to capture the Triple Crown.

Aaron never received the attention he deserved until late in his career. He played in only two World Series and was stuck far from the media spotlight in Milwaukee and Atlanta.

He became more appreciated with the passing of time.

Aaron was elected to the Baseball Hall of Fame in 1982 — his first year of eligibility and just nine votes short of being a unanimous choice.

In 1999, baseball began honoring its top hitter with the Hank Aaron Award, akin to the Cy Young for pitchers.

Henry Louis Aaron was born in Mobile, Alabama, on Feb. 5, 1934. He headed a long list of outstanding players who came from that Gulf Coast city in the segregated South — Satchel Paige, Willie McCovey, Billy Williams and Ozzie Smith among them.

Initially hitting with a cross-handed style, Aaron was spotted by the Braves while trying out for the Negro League’s Indianapolis Clowns. The Giants also were interested but Aaron signed with the Braves.

Aaron’s big league debut in 1954 was hardly glowing: he struck out twice and hit into a double play. By season’s end, the rookie had put up promising numbers: 13 homers, 69 RBIs, a .280 average.

Aaron was a full-fledged star in 1957, when he led the Braves to a World Series victory over Mantle’s Yankees. The following year, Milwaukee made it back to the Series, only to blow a 3-1 lead and lose to the Yankees in seven games.

He never came so close to a championship again.

He ventured into business, buying fast food chicken franchises, doughnut shops and an automobile dealership. He also dipped into politics as brother-in-law David Scott’s campaign treasurer in a successful race for the U.S. House.

Aaron enjoyed getting out to the ballpark well into his 80s, even after hip replacement surgery forced him to use a walker to get around.

Aaron also spoke out from time to time on some of the game’s most pressing issues. He lobbied against putting Pete Rose in the Hall of Fame. He bemoaned the lack of Blacks in upper management. He called on baseball to adopt a tougher drug-testing policy.

But Aaron never singled out Bonds, even making a congratulatory video that was shown the night the home-run record passed to the San Francisco Giants star.

“Records are made to be broken,” Aaron said. “I did my share, whatever I could do, and that’s it.”

On Friday, Bonds offered thanks to Aaron "for everything you ever taught us, for being a trailblazer through adversity and setting an example for all of us African American ball players who came after you.”

This story includes research from the late Ed Shearer, a longtime Atlanta sports writer for The Associated Press who covered Aaron’s 715th homer.