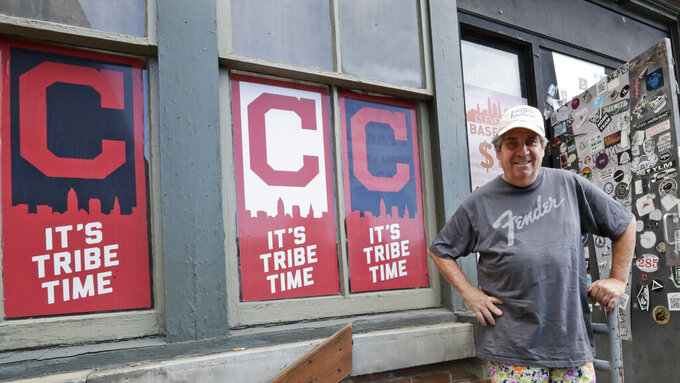 Mike Miller, owner of Wilbert's Food & Music, poses in front of the restaurant before a baseball game between the Minnesota Twins and the Cleveland Indians, Tuesday, Aug. 25, 2020, in Cleveland. The coronavirus pandemic has been especially hard on businesses that rely on ballpark traffic, eliminating crowds at major league games, and leading to rules that limit the amount of people they can have inside their doors at the same time. (AP Photo/Tony Dejak)

CLEVELAND (AP) — No band has plugged its guitars into the amplifiers on Wilbert's stage since mid-March, and there's usually an open bar stool or three these days at the music joint just a long relay throw outside the outfield walls of Progressive Field.

It's a sunny Sunday, and there's a hint of fall in the air on this August afternoon as the Indians are about to play their series finale against Detroit. But except for the dull roar from fake crowd noise being pumped inside the ballpark, it's quiet in downtown Cleveland.

Too quiet. Desolate and nearly deserted.

As in most major U.S. cities, Cleveland's office buildings are at half capacity or less as workers stay home during the COVID-19 pandemic to lessen the risk of infection. So the lunch-time crowds are thin, there's little traffic on the streets and the sidewalks are mostly empty.

But what's noticeably missing is the buzz created when fans in the outlying suburbs of Northeast Ohio descend on the city to watch their beloved Browns, Indians and Cavaliers play.

The impact of the virus has been tough on all businesses, but harshest on the numerous bars and restaurants inside the Gateway District, which includes Progressive Field and Rocket Mortgage FieldHouse, the recently remodeled home of the Cavs.

“I can probably last another two months,” said Micheal Miller, Wilbert's 17-year owner and Cleveland-area native. “I had a fire here at the end of September, and then the pandemic and then the riots, so it’s been tough. But I’m an Irish Scorpio, so it’s going to take a lot to keep me down."

Miller is fighting to stay open. Others have surrendered.

Next door to Wilbert's, the Thirsty Parrot's huge wooden outdoor deck would normally have customers spilling beers and spilling off into its parking lot when the Indians are home. It's closed today, and it's not been uncommon for customers to nearly outnumber staff when it's been open.

On the other side of East Ninth Street, plywood covers the windows at Brickstone that were broken out during this summer's social injustice protests. The eatery's website says it's temporarily closed, but Miller knows of several other places nearby that either can't re-open or are up for sale.

It's a bleak picture and it could be years before the area, which relies upon Cavs and Indians crowds for survival, bounces back to pre-pandemic days.

This isn't new for Cleveland, which has been through down times before. But what makes this more painful is that before the invisible virus shut down normalcy, the downtown area had been as vibrant as it had been in decades.

Miller has managed to keep a couple of his employees working, and some financial assistance from the government has helped.

He didn't get the usual bump from Indians opening day, a pseudo holiday in Cleveland, when it's wall-to-wall inside, Wilbert's and Miller makes enough profit to pay off his insurance and licence fees for the entire year.

A father of four, the 62-year-old Miller is trying to stay positive. At this point, it's all he can do.

He's got a magic act booked in a few weeks, and it's going to take some sleight of hand to keep his doors open in the fall if the state of Ohio doesn't relax some of its COVID-19 mandates. Miller's only allowed to be at half-capacity — about 100 patrons — and he's not even sure that would be safe.

In the meantime, he's welcoming back regulars, including members of the Indians grounds crew who stop in during this most irregular season. Miller, who has proudly booked over 100 Grammy Award-nominated acts ranging from Keith Urban to Jack White of the White Stripes, won't give up.