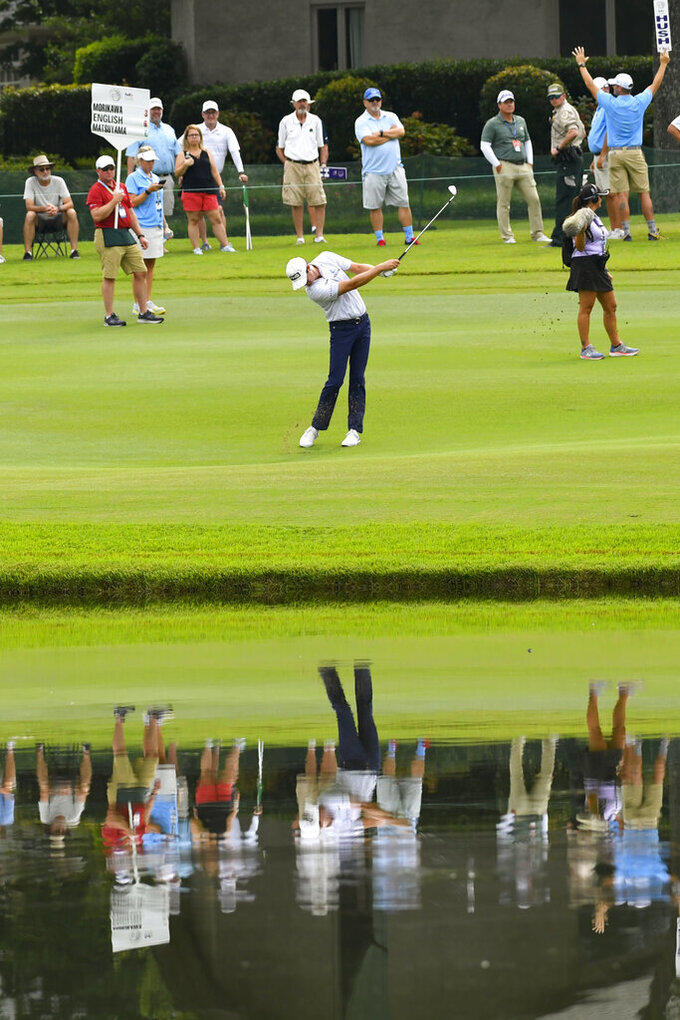 MEMPHIS, Tenn. (AP) — Harris English shot a 5-under 65 on Friday at TPC Southwind to hold onto the lead in the FedEx St. Jude Invitational.

English withstood strong challenges from Cameron Smith and Abraham Ancer to hold the top spot at 13-under 127.

Smith had a 62 that required only 18 putts, tying a PGA Tour record for fewest putts in a round. Ancer shot a bogey-free 62, his tour-leading 14th bogey-free round of the season. They were two strokes back.

Ian Poulter (66), Scottie Scheffler (65) and Sam Burns (64) were 10 under, and Louis Oosthuizen (64) and Bryson DeChambeau (66) were 9 under. DeChambeau missed the Tokyo Olympics last week because of a positive test for COVID-19.

English opened the World Golf Championships event Thursday with a 62 to match his lowest PGA Tour score and entered the second round with a two-stroke advantage over a foursome that included Poulter.

“I’ve been playing really solid,” he said. “When I miss the greens, I feel like my short game has been on point. And I feel like I’m putting it well. I made some good saves for par, (I made) some good birdies putts. Everything is clicking right now.”

The 2013 winner at TPC Southwind, English showed no signs of relinquishing his lead from the outset. Starting on the back nine, he rolled in a 35-foot birdie putt on the par-3 11th and added birdies at 14 and 16.

The only blemish during English’s round was a bogey on the par-4 second hole. He missed a 9-foot par putt, but recovered immediately with an eagle on the par-5 third. He hit his 5-iron approach inside 5 feet and made the putt to go up by three strokes. He said the eagle was the key to his round.

“I feel like I just really shook off that bogey well and kept on going,” he said.

Two of English’s four PGA Tour victories come this season, the Sentry Tournament of Champions in January in Hawaii and the Travelers Championship in June in Connecticut. He finished third in the U.S. Open.

“This game is all about confidence and if you have confidence on your side, you just run with it,” English said. “In years past, a (bad shot) would send me into a downward spiral. Now I’m enjoying the grind of it.”

A relatively wind-free day produced an abundance of low scores. Of the top 37 on the leaderboard, 34 shot 69 or better.

With 48 of the world’s top 50 players in the 66-player field, English can’t afford to be comfortable with how the first two rounds have gone.

“You’ve got to keep the gas pedal down,” he said. “The scores are pretty low right now and you can’t let up.”

Smith, who finished 10th at the Tokyo Olympics last weekend, said he wasn’t aware of how few putts he had taken until he “was adding them up” as he walked down the 17th fairway.

“I said, ‘That can’t be right’,” Smith said. “It was just a good day on the greens. The surfaces here are so good.”

Smith also had a bogey-free round that included an eagle on the par-5 third hole. He needed only seven putts through the first nine holes. On the back nine, he rolled in birdies on Nos. 12, 14 and 16 – all inside 25 feet – and nearly added a birdie on 18, sliding his 22-foot putt just left of the cup.

Ancer used solid iron play to post his 62. Each of his eight birdie putts was inside 17 feet.

“I’m really happy with the way I stroked the ball,” he said. “My long irons were spot on.”

Ancer started the round five shots back of English, but made his move early. He birdied four of his first seven holes to get to 10 under. He added four more birdies on his back nine.

The 14 bogey-free rounds this season are a testament to his consistency.

“That’s always my goal to be bogey-free when I tee it up,” Ancer said. “It makes me kind of simplify every hole. Just hitting greens is the biggest goal and then, from there, I just focus, obviously, on my putting. But I’m happy that I got a round like that under my belt here. This is a very demanding golf course.”